It was barely a month ago on June 15 that in the middle of the COVID-19 pandemic, near-record unemployment, widespread racial turmoil and other forms of civil unrest, LGBTQ+ Americans were given a welcome if slightly unexpected reason to celebrate. In Bostock v Clayton County, Ga., the U.S. Supreme Court ruled that Title VII of the Civil Rights Act of 1964 protects employees against discrimination because of their sexual orientation or gender identity. While the LGTBQ+ community, activists and allies alike rejoiced at the 6-3 decision, as soon as the metaphorical confetti settled to the ground, questions followed. Perhaps the biggest one looming over the community is the most difficult to answer: “What’s next?”

Unfortunately for members of the LGBTQ+ community in Pennsylvania and many other states, discrimination has yet to be explicitly made illegal in several other categories, including housing and public accommodations. In order to gain insight into these issues, as well as discuss whether or not Bostock might open the doors to more abundant protections in the near term, Saucon Source recently spoke to several individuals with extensive experience in local and/or state real estate, LGBTQ+ and other issues.

According to information provided by the national LGBTQ+ advocacy group the Human Rights Campaign, “housing discrimination against lesbian, gay, bisexual, transgender and queer people takes a variety of forms. For example, couples have been discriminated against when shopping for a home. Others have been told they cannot put both partners’ names on a homeowner’s insurance policy, which is important to do if both partners share ownership of the home. And still other couples have been discriminated against when filing a claim as some insurance companies have attempted to refuse claims or cancel policies on the grounds that the owners are ‘unrelated.’”

Federal law offers LGBTQ+ individuals no protection in these cases. The Fair Housing Act (Titles VIII and IX of the Civil Rights Act of 1968) prohibits discrimination in the sale, rental or financing of housing-related transactions based on race, color, national origin, religion, sex, family status or disability. However, it does not protect Americans against discrimination based on sexual orientation or gender identity. 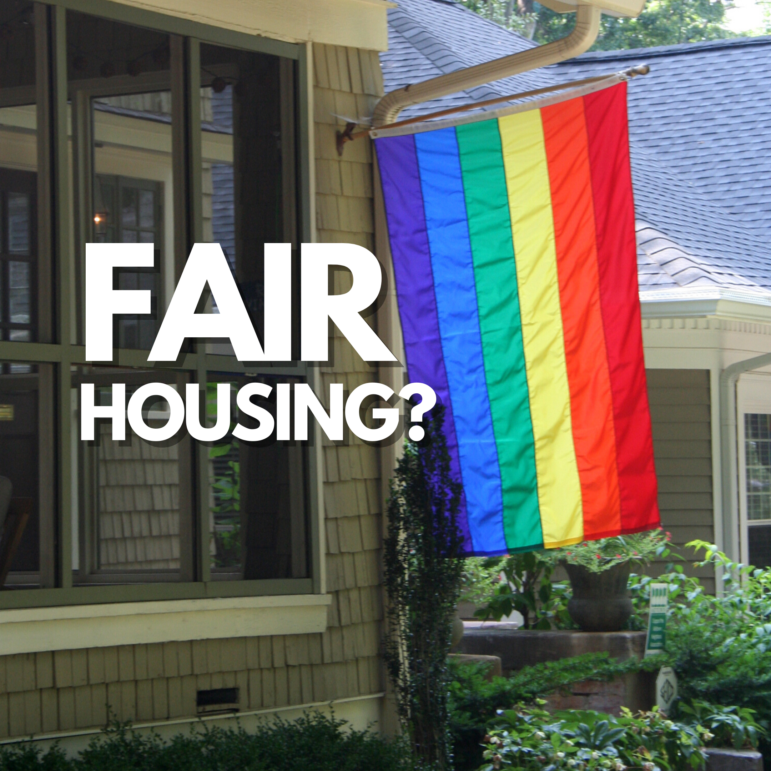 Consequently, according to the HRC, “same-sex couples often must pay more in taxes when they buy or sell a home, or transfer ownership interest, than married heterosexual couples do. In the event of a breakup or death, one partner may find himself or herself out of a home–unless the couple had the proper legal documents drawn up.”

Since there are no federal laws or court decisions to regulate the issue, the legality of housing discrimination against LGBTQ+ Americans is determined by the 50 states under the Tenth Amendment to the U.S. Constitution, which says “the powers not delegated to the United States by the Constitution, nor prohibited by it to the States, are reserved to the States respectively, or to the people.” According to the LGBTQ+ governmental leadership organization the Victory Institute’s website, “today there are more states than not where there is no protection for (LGBTQ+) people in housing. There are 28 states where one is legally allowed to be denied. Most (LGBTQ+) people are concerned about discrimination, with a survey in 2015 reporting 73 percent of (LGBTQ+) Americans are strongly concerned about housing discrimination from agents, landlords and neighbors.”

In Pennsylvania, the laws on discrimination may appear opaque upon first glance.

Shanker highlighted an incident he said involved discrimination as an example of what LGBTQ+ residents have faced when seeking housing in the Lehigh Valley.

“A few years ago, I got a phone call from a couple trying to buy a home in Bangor,” he said. “One of the people is (transgender) and his partner had been the one speaking to the real estate agent. The agent was very responsive to her, but when (the agent) found out that the client’s partner was trans the real estate agent stopped responding.”

“This is just one of many examples of how LGBTQ people experience housing discrimination in real life,” he added.

Although some Supreme Court observers believe the Bostock decision indicates momentum toward more universal civil rights for LGBTQ+ Americans, with Widener University law professor John Dernbach saying it is ”quite likely that a court will use Bostock to conclude that that the Fair Housing Act should be interpreted the same,” Shanker is an advocate for a state legislative solution to the issues as opposed to waiting for the Supreme Court to take up a related case.

“The Pennsylvania state legislature and Congress could both act to ensure that housing non-discrimination protections are the law of the land,” he said. “In addition to housing, we (LGBTQ+ people) really need compreheisive protections against discrimination in public accomodations.”

“The Bostock case was a Title VII case, and Title VII does not include public accommodation protections, so the need for a legislative solution is clear,” Shanker said, adding that “this has profound implications especially for renters, who today are much more likely to experience housing discrimiantion than home buyers.”

Pennsylvania is one of nearly two dozen states that do not explicitly protect LGBTQ+ people from housing and public accommodation discrimination. However, it has interpreted its existing prohibition on sex discrimination to include sexual orientation and gender identity. As evidence of that, Shanker pointed to October 2018 guidance from the Pennsylvania Human Relations Commission (PHRC), which says “many state agencies and numerous courts have come to the same conclusion that the U.S. Supreme Court just did: that ‘sex’ is inclusive of sex stereotypes, sexual orientation and gender identity.”

Bolstein elaborated on the guidance, explaining that its existence allows a claim to be filed in Pennsylvania for”sex”-based discrimination. He indicated that although Bostock is based on Title VII of the Civil Rights Act–which only applies to employment and doesn’t cover housing or address the question of religious beliefs–as far as the PHRC is concerned, it is interpreted to apply to all areas, and not just employment.

He indicated that LGBTQ+ Pennsylvanians should report instances of discrimination to the PHRC, and that potential legal recourse may include filing a lawsuit asking for damages. He said he expects that the PHRC “will now move forward to promulgate regulations,” because the guidance currently does not have the force of law behind it.

Bolstein said that although there has been an effort to amend Pennsylvania’s Human Relations Act to protect LGBTQ+ residents for years, any revision would have to go through the state legislature, and so far no amendment has made it out of committee.

However, he said the PHRC intends to move forward with a proposal “within the next six months. Our position is that the Supreme Court decision paves the way for this.”

Gov. Tom Wolf has also hinted at his support for change by recently acknowledging the fact that discrimination in housing exists for LGBTQ+ Pennsylvanians. In the wake of the June murder of transgender woman Dominique “Rem’mie” Fells in Philadelphia and the Bostock ruling, he released a statement saying “unfortunately, as the tragic murder of transgender woman and LGBTQ+ rights activist Dominique ‘Rem’mie’ Fells shows, Pennsylvanians are still not free from discrimination against sex or race. Today’s Supreme Court ruling will provide more protection inside the workplace, but discrimination remains in other areas, such as housing and public accommodations.”

Lehigh County Board of Commissioners chairwoman Amy Zanelli, a realtor and member of the LGBTQ+ community, has a personal investment in this issue on multiple fronts.

When asked how or if housing discrimination has impacted her, she gave the following account that highlights one of her personal experiences.

“I have the privilege of being an ‘invisible minority.’ People don’t look at me and assume I’m a lesbian or Jewish, so I have flown under the radar mostly. However, professionally I worked with many clients who were turned down rental applications and even contracts to buy houses because they did not wish to sell/rent to anyone of the LGBTQ community. So much so that, in fact, when I purchased my new house, (my wife and I) went to great lengths to not present any evidence before closing that we were married. Housing discrimination is very real, but extraordinarily hard to prove. Luckily, when it came out at closing no one seemed upset. If anything, offended we were not more forthcoming. However, it was, in our opinion, too much of a risk to take.”

Zanelli said she hopes Bostock will pave the way for a similar U.S. Supreme Court ruling regarding housing and public accommodations, but added that “discrimination is so very hard to prove. It’s great we have these rulings but unless a person puts in writing something akin to ‘the only reason I won’t rent to this couple is because they are gay,’ it likely (they) won’t be prosecuted, nevermind found guilty.”

When asked what impact a similar court decision or legislation might have on the LGBTQ+ community, Zanelli was pragmatic.

“Unfortunately, laws don’t change people,” she said. “They only provide consequences for those that break them and a deterrent for those who otherwise would. Only time, love and acceptance will really change what we go through in our struggle for equality.”

Shanker provided some advice for those who are interested in helping to advance LGBTQ+ protections for housing, saying “community members who share our values that discrimination is wrong should communicate with your member of Congress and state legislators letting them know that you are excited about the recent Supreme Court opinion in Bostock, but that you believe they should take action to pass housing and public accomodation discrimination protections as well.”

If you or someone you know believes you have been the victim of housing (or any other form of) discrimination on the basis of sexual orientation or gender identity, you may file a complaint with the PHRC and/or contact the Bradbury-Sullivan legal clinic for advice.