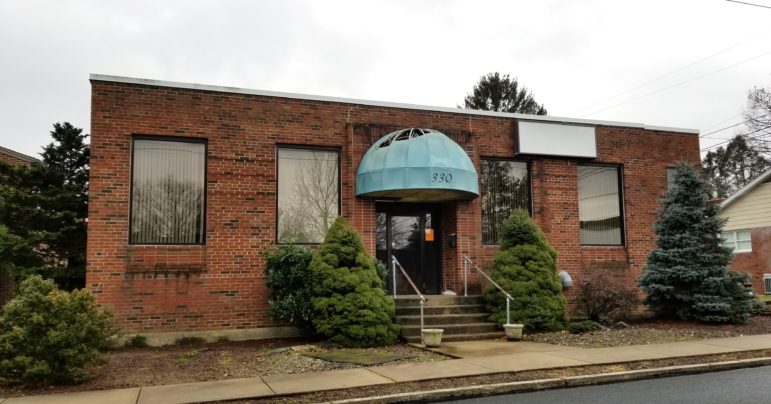 The former commercial laundry facility pictured above at 330 Linden Avenue, Hellertown, is the subject of a proposed mixed-use conversion. Under the proposal, the building would be converted into an office and apartments. (FILE PHOTO)

The Hellertown Borough Planning Commission discussed a mixed use site plan proposal by Sean Burke of Stella Cadente Investments LLC of Bethlehem for a former commercial building on Linden Avenue at their July 14 meeting. The property is considered non-conforming with the borough’s zoning amendment, because it is a commercial property located in a residential (R2) zoning district.

The proposal, which was resubmitted with alterations after it was voted down in February by both the planning commission and borough council, was met with more questions from planners, who reiterated concerns about parking as well as other features.

The revised plan also calls for reorienting parking spaces into a “stacked” pattern, creating a total of 19 spaces instead of the 25 that would be normally be required based upon the number of apartments plus the office.

Rather than vehicles stacked vertically on top of one another, in this case the term “stacked” refers to a parking arrangement whereby there would be a single row of aisles, and in each aisle there would be space for two cars to be parked.

“Each aisle was to be for each apartment and the (residents) of that unit would need to park in front of or behind each other,” Hellertown zoning and codes enforcement officer Kris Russo explained in an email.

Burke told planners the spaces would be shared between the apartment tenants–many of whom would be gone during regular weekday business hours–and office employees.

Another issue raised was that of emergency access along the sides of the property.

Although buffers such as a fence or bushes are often required between “incompatible use” properties (such as in between a residential unit and a business), commission member Kim LaBrake expressed concern about the proposed width of the walkways on each side of the building. Burke’s plan proposes fencing on each side and LaBrake worried that in the event of an emergency the paths would not provide sufficient room for people to quickly vacate the premises. The question of adequate lighting for residents was also raised, with Burke agreeing to add lighting to the building’s rear parking lot if necessary.

Commissioner Joe Pampanin recommended that the number of apartments be reduced from seven to six.

Commissioner Don Werkheiser added that the parking situation will be affected by what type of business moves there. If the occupant is one which has frequent visitors, such as a doctor’s office, he speculated that the proposed number of spaces would be insufficient.

Pampanin ultimately made a motion recommending that the Hellertown Zoning Hearing Board approve a maximum of only six apartments as part of the proposed conversion.

The motion passed, with the commission then voting to table the plan until the outcome of the next zoning meeting, which was held Wednesday.

“The zoning hearing board ruled to grant the continuance of a non-conforming use within an R2 zoning district (commercial offices mixed with apartments),” Russo said Friday, in his email. “However, they did not grant relief for the number of dwelling units per acre. The applicant was seeking to have seven units when only five were permitted under the ordinance.”

“The first motion was to allow seven units,” Russo said. “This vote went 3-1 in favor of denying the request. The second motion was to allow six units. This motion was also denied 3-1. So in order for the applicant to move forward, he would need to lower the number of dwelling units to five so he meets the current zoning regulations.”