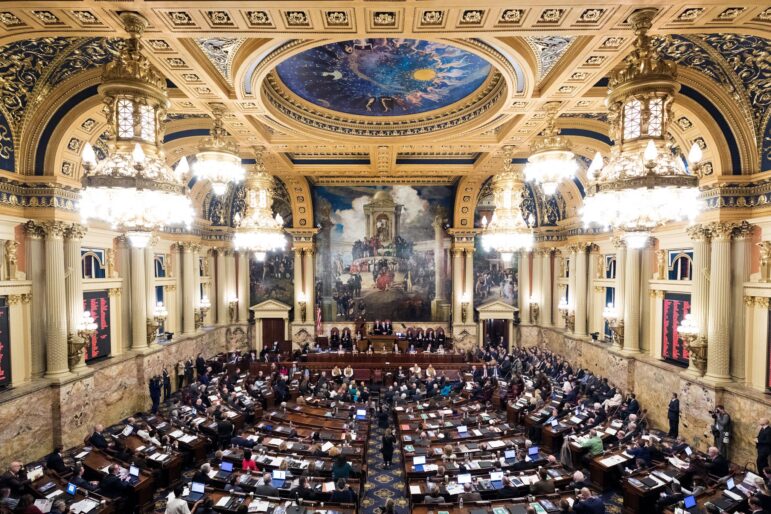 The debate surrounding how the state should handle the coronavirus pandemic has descended into an all-out interbranch war.

HARRISBURG — Having lost battle after battle to wrest control of Pennsylvania’s coronavirus response from Gov. Tom Wolf, the GOP-controlled legislature now wants voters to permanently weaken a governor’s emergency powers while boosting their own.

This week, Republican lawmakers–with help from a handful of Democrats, including state Sen. Lisa Boscola (D., Northampton/Lehigh), who represents the Saucon Valley–cleared the first hurdle to get a constitutional amendment on a future ballot that would allow the General Assembly to unilaterally end a disaster declaration.

The process is lengthy with no guaranteed outcome, but it has a major benefit for the GOP–unlike a piece of legislation, this approach doesn’t require Wolf’s approval. To send a question that would amend the Pennsylvania Constitution to voters, the House and Senate must approve a resolution during two consecutive sessions, a relatively easy task when one party controls both chambers.

Currently, a governor can issue a disaster declaration for 90 days and extend it as needed. Wolf did that in March as the state began reporting its first cases of the coronavirus, and he renewed the order in early June. Such a declaration greatly expands the executive’s powers, allowing the governor to suspend regulatory provisions, control travel from certain areas and suspend the sale of guns.

The new resolution, authored by Sen. Kim Ward (R., Westmoreland), would allow a simple majority in the legislature to end a disaster declaration without the governor’s consent. It would also require the General Assembly to approve any extension beyond the first 21 days.

Should the legislature prioritize the resolution when lawmakers return for a new session in January, the soonest the question could appear on the ballot is May 2021, according to Jennifer Kocher, a spokesperson for Senate Republicans.

Throughout the coronavirus pandemic, Wolf and his administration have made the big decisions–to shut down schools, close businesses and issue sweeping stay-at-home orders–and set the speed for reopening Pennsylvania.

Pennsylvanians largely approved of those decisions, according to a Washington Post-Ipsos poll from May, which showed that more than 70 percent of adults in the state agreed with the governor’s handling of the pandemic. 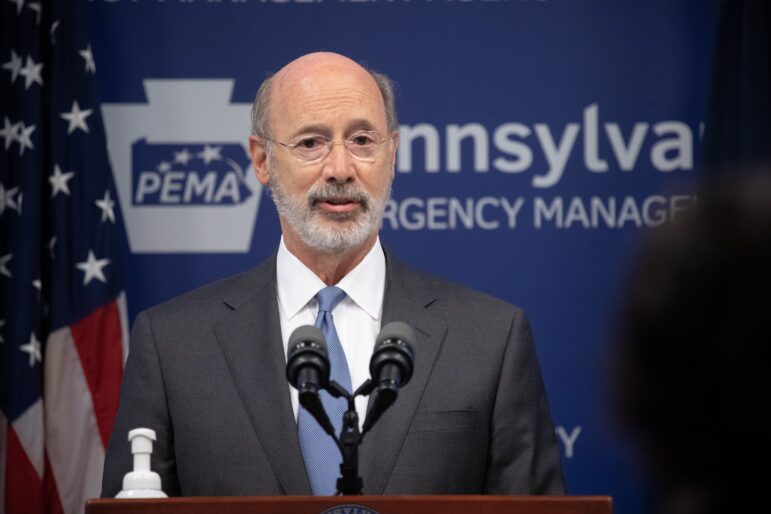 Still, the strategy has frustrated the usually powerful Republican-controlled legislature, whose efforts to ease restrictions ahead of the administration’s timeline were repeatedly vetoed by Wolf. The frustration boiled over into a lawsuit to force Wolf to end his emergency order, which was rejected by the state Supreme Court earlier this month.

Justice David Wecht, writing for the majority, said lawmakers were required to send the resolution to Wolf, who then would be able to approve or veto the measure.

That is “a key component of our Constitution’s balance of powers among the several branches of government, a balance that prevents one branch from dominating the others,” Wecht wrote.

Wolf made his disapproval of the measure official when he formally vetoed it Tuesday.

The debate surrounding how the state should handle the coronavirus pandemic has descended into an all-out interbranch war. Republicans in the Senate have twice taken the Wolf administration to court, including in May for documents related to a waiver program that allowed some nonessential businesses to stay open while others had to remain shuttered. That case is still pending.

GOP leadership has framed the proposed constitutional amendment as a way to “give Pennsylvanians [a] voice in emergencies.”

“Pennsylvania is not a dictatorship, and the voters should ultimately decide,” House Speaker Bryan Cutler (R., Lancaster) said in a statement. “We are a co-equal branch of government and have tried at every turn to work with the administration, including asking to join a multi-branch, bipartisan task force to manage this crisis. The governor turned us down, deciding instead to go it alone for months on end.”

The General Assembly is also advancing bills that would force the Wolf administration and future ones to act in certain ways during disaster declarations, though the legislation is subject to the governor’s veto pen. This week, the Senate unanimously approved a bill that would compel the executive to give the public and media access to government records during an emergency. The legislation garnered the same level of support when it passed the House in May.

Wolf said Wednesday he will reject the bill when it reaches his desk.

“I am for transparency and I will set my record of transparency up against members of the General Assembly any day of the week,” Wolf said. “I think that particular bill has some flaws.”