A well-preserved 19th century farm property in Lower Saucon Township has been added to the National Register of Historic Places, it was announced late last month.

The John Wagner Family Farmstead on Meadows Road south of Hellertown was added as a property that exhibits the “distinctive characteristics of a type, period or method of construction or that represent the work of a master, or that possess high artistic values.”

The farmstead consists of a brick house, a barn, six smaller outbuildings and remnants of three other outbuildings, all of which were built between about 1840 and 1940 according to the Pennsylvania State Historic Preservation Office, which announced that it was added to the register on its blog in late July.

The barn is also considered to be an important example of what is known as a Standard Pennsylvania Closed Forebay barn, reflecting the “essential characteristics of a Pennsylvania bank barn and the skill and careful craftsmanship of its builders,” it said. 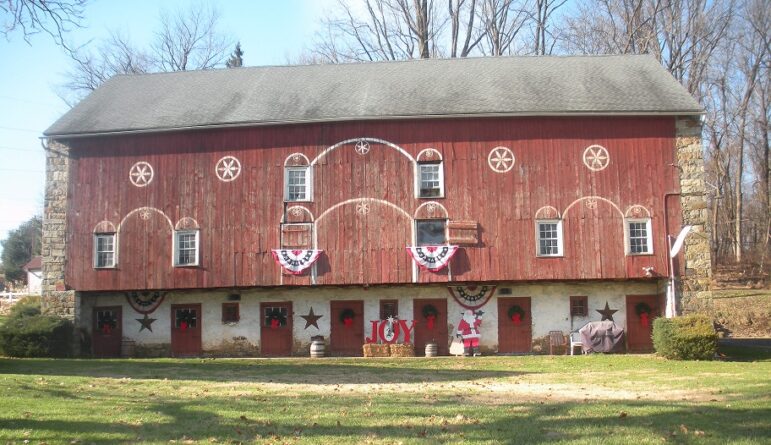 The c. 1840 barn that is part of the John Wagner Family Farmstead property in Lower Saucon Township is considered to be an important example of a Standard Pennsylvania Closed Forebay Barn.

Wagner Farmstead owner Jerry Holum said his journey to having his property added to the prestigious registry of historic American properties began six years ago.

“I wanted it listed as a farmstead and very few farmsteads are listed in Pennsylania,” he said in a letter announcing the news. “In addition, nominations are typically listed under only one of the four criteria to be considered eligible for listing. I wanted the property to be listed under dual criteria. One was distinctive characteristics (or architectural/workmanship–the centerpiece being the barn) and the second its importance in history.”

Holum, who owns the property with his wife Joanne, described a lengthy review process that was further delayed by the COVID-19 pandemic that began in March.

“I have discovered during this long and grueling process that things do not come easy or quickly when dealing with governmental agencies,” he said. “Perseverance, commitment, dedication and patience…are required.”

The Holums thanked friends who sent letters in support of their property’s nomination to the Pennsylvania State Historic Preservation Office, which is part of the state’s Historical and Museum Commission. The office governed by a board, which approved the Holums’ nomination in October 2019.

“It has been a long and exhausting journey, but we have finally crossed the finish line,” Jerry Holum said. “I think Jacob and John Wagner, who were the developers of the farm (c. 1840), can now be assured their farm has been recognized, saluted and memorialized.”

The National Register of Historic Places is maintained by the U.S. Department of the Interior as part of the National Park Service.

Several other Lower Saucon Township properties are listed on the register, including the township-owned Heller Homestead on Friedensville Road.