HARRISBURG — On Tuesday morning, Jason Kiefer went to get his mail and found two copies of an eviction notice taped to the door, scheduling a court hearing for Sept. 10. The address of the Lehigh County Courthouse was crossed out, replaced by “Zoom” in scribbled red letters.

That same morning, thousands of other renters across Pennsylvania were also at risk of being evicted for the first time since the coronavirus pandemic hit the state, after Gov. Tom Wolf’s temporary moratorium expired and he said he was powerless to extend it.

But, in a dramatic turnaround, tenants like Kiefer will now be safe from eviction until the end of the year–at least in theory–because of a new federal order.

That afternoon, the Centers for Disease Control and Prevention announced an order to ban most evictions nationwide through the end of the year, arguing it was necessary to slow the spread of the virus. The order caught housing advocates and landlord groups alike by surprise.

The new eviction ban will prevent homelessness, help state and local governments implement stay-at-home orders and avoid sending people who have been displaced to crowded shelters where they would be more likely to get sick, the agency said.

Much remains uncertain about how the new eviction ban will work in practice–and whether it will survive legal challenges.

“This is a completely unprecedented action and we’re in uncharted territory,” said Mary Cunningham, an expert in housing policy at the Urban Institute, a Washington, D.C. think tank. “It will likely be challenged in the courts and we’ll have to see.”

To qualify, tenants must fill out a form certifying that they have experienced a “substantial” loss of income, are making their “best efforts” to pay as much of their rent as possible and have tried to get help from government assistance programs. They must also declare that, if evicted, they would be homeless, forced to live in a shelter or forced to live in cramped conditions.

The ban only covers tenants who earn less than $99,000 per year.

Pending guidance from the federal government or state courts, some key parts of the order remain open to interpretation.

A crucial question is whether it applies to the entire eviction process–barring landlords from even sending a tenant notice of an eviction–or only to the final step, when tenants must leave the property or be removed, said Vik Patel, an attorney in the housing unit at Community Legal Services in Philadelphia. 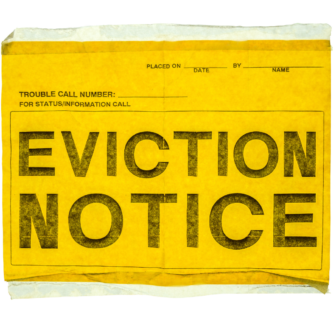 Even in cases where an eviction filing doesn’t result in a tenant having to leave the property, the filing itself can become a black mark on someone’s record that makes it harder for them to find housing in the future.

“It would be the most helpful if it covers the entire process, because then there aren’t any gaps that someone might fall through,” Patel said.

Landlord groups, on the other hand, argue that the order only applies to the final stage of the eviction process, allowing eviction filings and court hearings to continue.

“We’re trying to get some clarification on it,” said Paul Cohen, general counsel for HAPCO, a Philadelphia landlords’ association. He said he doubted that would come before Friday, when the order is set to go into effect.

The new order does not cover tenants who face eviction for reasons other than not paying rent, and advocates said they expect to see a spike in landlords filing for eviction over relatively minor lease violations as a pretext.

For Kiefer, who lives with his girlfriend and two children near Allentown, the new eviction ban offers a tentative lifeline. He said he has struggled to make rent since being laid off from his job as an auto body technician in March.

He applied for food stamps for the first time. He tried to get help from the state’s troubled rental assistance program. For months, he said, he’d been making partial payments, but still racked up about $4,000 in debt.

“There’s just nowhere we can go,” Kiefer said. “None of our family have big enough houses to take us in.”

Under the federal order, late fees and interest can still accrue, which could leave tenants with an impossible mountain of debt come the end of the year.

“This is a really positive development but the problem still remains that if people can’t pay their rent, and they’re not paying it, that bill is going to come at some point,” said Phyllis Chamberlain, executive director of the Housing Alliance of Pennsylvania.

Lawmakers are weighing changes to Pennsylvania’s troubled rental assistance program, in part because many landlords have refused to participate, citing a $750 cap on the amount of assistance they can receive and a requirement that they waive their right to collect any remaining rent, a Spotlight PA review found. Onerous paperwork requirements have also slowed the pace of approving applications in some counties.

A spokesperson for Wolf said the governor believes the state legislature should both fix the rental assistance program and reinstate the state’s eviction ban, which went further than the new federal order by preventing foreclosures.

“The eviction moratorium is important, but it’s temporary,” Chamberlain said. “Rental assistance is a longer-term solution that actually addresses the root problem.”