The abbreviated 2020 Colonial League football season hasn’t even begun and one local high school is already being forced to make changes to its schedule because of a positive COVID-19 test.

In an update shared on Twitter (@SolehiSpartans) Saturday, the district’s athletic program announced that a member of its high school football program recently tested positive for the virus.

All students and staff with whom the individual had “close contact” are now required to self-quarantine for at least 14 days from their last date of contact, which was Aug. 31, a letter from athletic director Marc Zimmerman and high school principal Beth Guarriello indicated.

As a result they “are not permitted on school grounds for any reason until Sept. 15,” according to the letter, which was also published on the district’s website.

It also indicated that anyone considered a “close contact” will be contacted by the Pennsylvania Department of Health as part of the department’s contact tracing protocol.

The department of health considers someone to be a “close contact” if they were within six feet of a person with a confirmed positive COVID-19 test for at least 15 minutes while they were infectious.

“The Southern Lehigh School District continues to encourage all parents/guardians and staff to complete the Daily Health Screener including an at home temperature check,” the letter from Zimmerman and Guarriello said. “All members of the Southern Lehigh School District community should follow the procedures outlined on the Daily Health Screener in the event that symptoms related to COVID-19 are present.

“Southern Lehigh School District students and staff must continue to closely monitor themselves for any sign of illness related to COVID-19 and seek medical guidance as needed,” it added. “The Pennsylvania Department of Health provides the following guidance specific to the symptoms of COVID-19.”

The football team’s first game cannot be played as scheduled later this month because the team will not have completed the required number of practices beforehand, due to the downtime caused by its members having to self-quarantine.

The team was scheduled to play the Wilson Warriors away on Saturday, Sept. 26 at 1 p.m.

The Southern Lehigh School Board initially recommended that the football season be canceled due to COVID-19 and the risk for transmission, however it later walked back that decision.

As of Sunday all of the Colonial League teams had committed to playing this season with the exception of Saucon Valley, whose first game will be played against Pen Argyl Sept. 26 if the school board decides to allow football to be played.

A decision regarding football as well as the other district’s fall sports is possible at the board’s next meeting, which will be held online via Zoom on Tuesday, Sept. 8 at 7 p.m.

Gov. Tom Wolf recommended last month that all high school sports be placed on hold until at least Jan. 1, however the Pennsylvania Interscholastic Athletic Association (PIAA) subsequently voted to allow districts to decide whether or not sports should be played.

According to the monitoring website COVIDActNow, since late August three important measurements of how well the disease is being mitigated–daily new cases per 100K of population, infection rate and positive test rate–have all increased significantly statewide.

Lehigh County is seeing increases that mimic the state trends, according to the site, while Northampton County’s measurements are essentially stable, at least as of late Sunday. 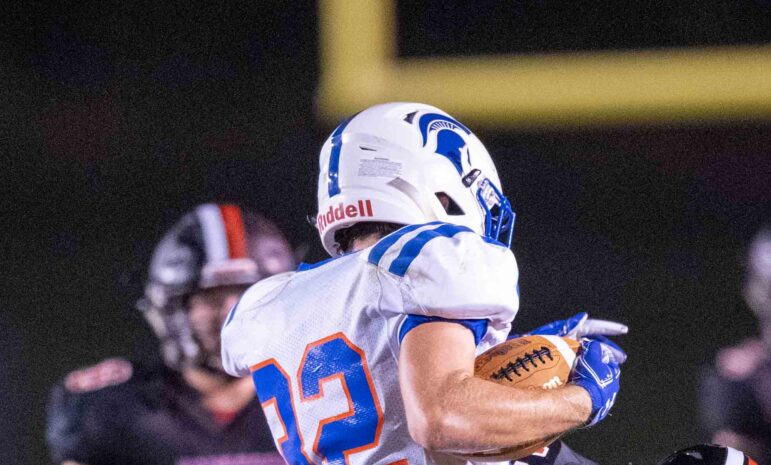 A Southern Lehigh football player runs back the second half kickoff for a touchdown during the team’s 2019 season opener against the Saucon Valley Panthers. (FILE PHOTO)