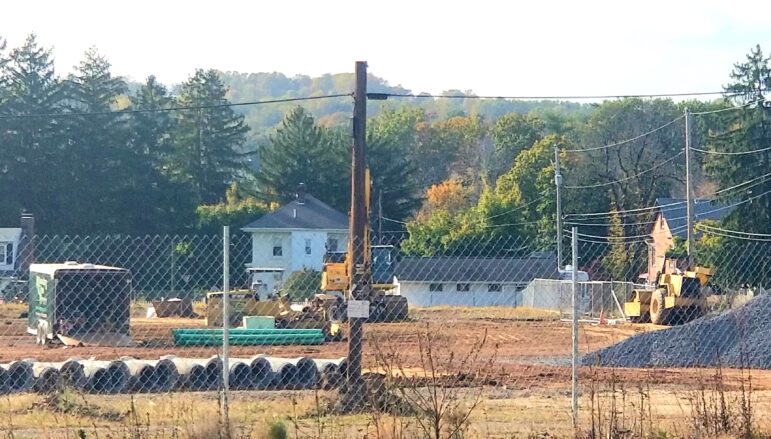 This several-acre construction site at Rt. 309 and Passer Road in Upper Saucon Township, Lehigh County, will soon be home to a Wawa gas station and convenience store. On Tuesday, the work site was a beehive of activity.

Work has resumed on a new Wawa gas station and convenience store that is being built at Passer Road and Rt. 309 in Upper Saucon Township, a busy intersection just north of Coopersburg borough.

The work site was a beehive of activity Tuesday afternoon, with construction crews making infrastructure improvements and preparing it for the store that has been planned for that location for a number of years.

The area was formerly home to the landmark Peppercorn Pub as well as several other buildings that were demolished to make room for the new structure earlier this year.

When it is completed, the store will be the first Wawa along the heavily-traveled Rt. 309 corridor between Allentown and Quakertown.

Hellertown, too, is currently without a Wawa, although according to the company’s store locator there are 26 stores within 20 miles of the borough’s 18055 zip code.

That could change, however, if a Wawa the Bethlehem city planning commission recently green-lit is built on the site of the former Chris’s Diner on Rt. 412 (Hellertown Road) north of the I-78 interchange.

Wawa is popular in Pennsylvania and a number of other states for its coffee, made-to-order sandwiches, staple food items, gas (available at select locations) and nearly round-the-clock hours.

Until the COVID-19 pandemic began, most stores were open 24 hours a day. However, the company now closes stores for an hour each night to allow time for cleaning and sanitizing.

More information about the company’s ongoing response to COVID-19 can be found on the Wawa website.

The Upper Saucon Township store isn’t yet listed on the site’s career opportunities section, but once it is, applications to work there may be completed online.

The company has not yet announced an anticipated opening date for the new store.