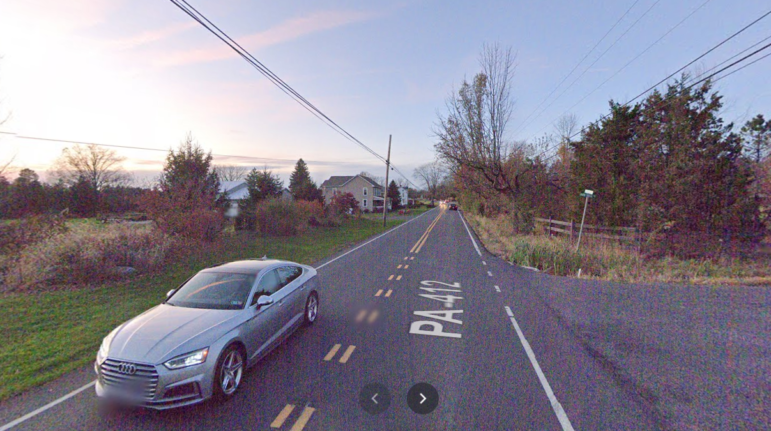 Pennsylvania State Police at Dublin say Michelle L. Grabert of Kintnersville was killed in a crash Sunday evening near the intersection of Rt. 412 (Durham Road) and Park Drive East (pictured above) in Nockamixon Township, Bucks County. The rural intersection is about a mile north of Ottsville.

A woman who was killed in a single-vehicle crash in Upper Bucks County last weekend has been identified by state police in a news release.

Troopers from the Dublin barracks said Michelle L. Grabert, 55, of Kintnersville, was northbound on Rt. 412 (Durham Road) near Park Drive East in Nockamixon Township on Sunday, Oct. 18, when shortly after 10:30 p.m. her vehicle crossed over the road’s northbound shoulder, causing its passenger side wheels to leave the roadway.

Police said the vehicle then re-entered the roadway, where it began an uncontrolled skid and crossed into the southbound lane before overturning, rolling an unknown number of times and coming to rest upside-down in a ditch on the side of the northbound lane.

According to police, Grabert was not wearing a seat belt at the time of the crash and was partially ejected from the truck as a result of it. They added that the vehicle’s airbags did not deploy in the accident.

Bucks County Coroner Tonya Mincer pronounced Grabert dead at the scene at 1:25 a.m. Monday, according to the news release.

Channel 69 News, which published a photo of first responder activity near the crash scene, reported that Rt. 412 was closed in the area for several hours Sunday and early Monday as a result of the crash.