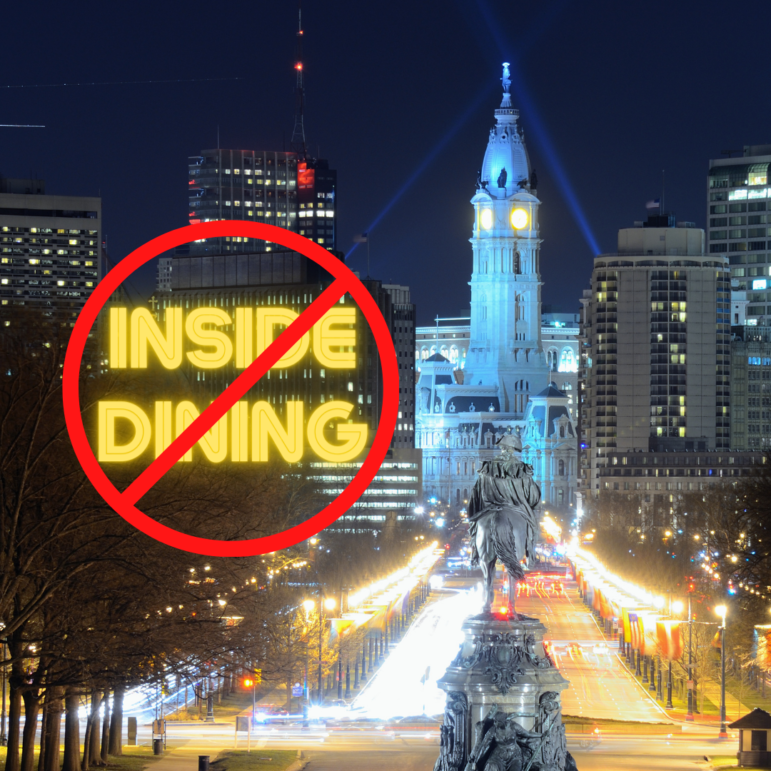 From Philly cheesesteaks to fine dining, eating out is a time-honored tradition in the City of Brotherly Love. Anyone who’s been planning a special holiday meal at a Philadelphia restaurant is likely to be disappointed, however, as all indoor dining in the city will be banned until at least Jan. 1, 2021 beginning this Friday.

As part of their response to an escalation in the number of coronavirus cases in the city, Philadelphia health officials announced new “Safer at Home” restrictions that include a ban on indoor dining that will take effect Friday.

The restrictions will remain in effect until at least Jan. 1, 2021, meaning that things like Christmas parties in restaurants won’t be held in the City of Brotherly Love this holiday season.

Restaurants that are preparing food for takeout, delivery and/or curbside pickup will still be able to operate.

“We may be tired of COVID, but COVID’s not tired of us,” said Philadelphia Health Commissioner Tom Farley in a news release about the new plan, which could have serious economic consequences for already-struggling restaurateurs in Pennsylvania’s largest city.

Other businesses are also being shut down as part of the Safer at Home plan. Among them are movie theaters, performance spaces, bowling alleys and casinos.

Gyms are being closed and indoor exercise classes must be suspended, however city health officials noted that “exercise groups and classes may continue outdoors.”

Recreational activities and sports for youth, community groups and schools will also be suspended, and high schools and colleges must move any in-person classes that are being held online, with the exception of clinical instruction for students in health sciences.

Philadelphia is currently reporting an average of approximately 720 new coronavirus cases each day. That number represents an increase of about 50 percent over the peak average number of new cases the city reported in the spring, at the start of the pandemic.

According to data from the website CovidActNow.org, Philadelphia has about 800 ICU beds, of which 56 percent (448) are currently occupied by non-COVID patients. Of the 352 other ICU beds, the site estimates that 134 (38 percent) are needed by COVID cases.

There has been no indication from state health officials that they plan to implement restrictions similar to what Philadelphia officials have announced, although statewide the number of new virus cases is also growing exponentially and consumers are once again buying paper products at a frenzied rate.

On Monday, the Pennsylvania Department of Health reported that nearly 10,000 new cases were confirmed in the preceding 48 hours. It also reported that there were 2,440 individuals hospitalized with COVID-19, 531 of whom were in an intensive care unit.

The department has confirmed that a “substantial” level of community transmission of the virus is now occurring in all but a handful of counties with relatively small populations. Among the counties that have substantial rates of transmission are Lehigh, Northampton, Bucks and Montgomery counties, a news release from the office of Pennsylvania Gov. Tom Wolf said Monday.

“The significant increase in cases and percent positivity across much of the state is cause for concern,” Wolf said in it. “We need all Pennsylvanians to take a stand and answer the call to protect one another. We need Pennsylvanians to be united in wearing a mask, practicing social distancing, washing our hands and avoiding gatherings. It is only by working together that Pennsylvanians can prevent the spread of the virus.”

The release noted that as of Thursday the state had seen a seven-day case increase of 26,215 cases. The previous seven-day increase was 16,646 cases, indicating an increase of about 57 percent in one week’s time.

It also noted that the statewide percent-positivity went increased from 6.8 percent to 9.6 percent, with every county in the state reporting “a concerning percent positivity above five percent” except for Forest (1.8 percent); Cameron (2.1 percent); Union (3.2 percent); Wayne (3.7 percent) and Susquehanna (4.6 percent) counties.

“This week’s data, in terms of case increase, percent positivity and other factors is concerning,” said Pennsylvania Secretary of Health Dr. Rachel Levine. “We know COVID-19 does not discriminate. It is affecting all Pennsylvanians, no matter your race, ethnicity, age, socioeconomic status or whether you live a rural, suburban or urban area. We need all Pennsylvanians to take the steps they can take to protect one another.”

To read the full “Safer at Home” order pertaining to Philadelphia businesses and organizations, click here.

Restaurants in other parts of the state are permitted to operate with reduced-capacity indoor dining and must comply with requirements that limit the on-premises consumption of alcohol.