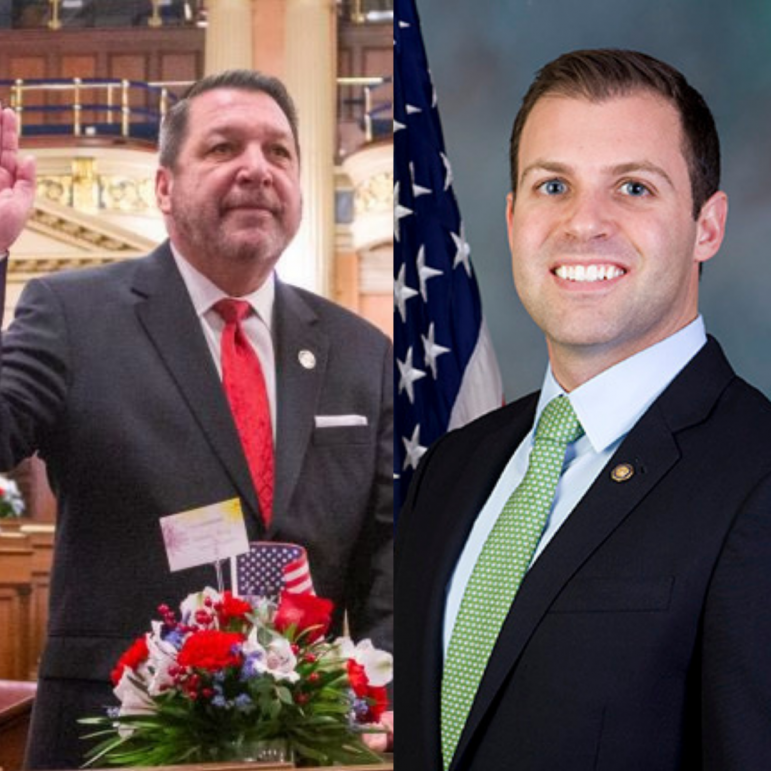 State Rep. Craig Staats (R-145, left) and State Rep. Ryan Mackenzie (R-134) both urged Pennsylvania’s Congressional delegation to reject the 20 Electoral College votes Pennsylvania had previously certified for Joe Biden on Jan. 6, which became a day of infamy because of the deadly insurrection by Trump supporters that occurred on Capitol Hill.

Among the more than 60 state representatives and state senators who last month petitioned Pennsylvania’s Congresssional delegation to reject the 20 Electoral College votes certified for Joe Biden were at least two elected officials from the Lehigh Valley area and Upper Bucks County.

In a Dec. 4 letter titled “Re: 2020 Election Review,” Rep. Ryan Mackenzie (R-134) and Rep. Craig Staats (R-145), among others, argued that protections against voter fraud included in the 2019 update to Pennsylvania’s Election Code were “undermined” in 2020 by Gov. Tom Wolf.

The Election Code update expanded mail-in ballot access to all Pennsylvanians; a bipartisan decision which proved prescient, since the coronavirus pandemic that followed made voting in person risky for many people, including the state’s sizeable senior population.

Among the ways in which the elected officials alleged that Wolf and/or his Secretary of State Kathy Boockvar undermined the ability for “all Americans…(to) have confidence in Pennsylvania’s election results” were the following:

The letter notes that the U.S. Constitution “empowers Congress to reject electoral votes that are not ‘regularly given’ or ‘lawfully certified’” and claims that the allegations it contains are evidence of “conduct (that) has undermined the lawful certification of
Pennsylvania’s delegation to the Electoral College.” The letter does not appear to have been accompanied by any documentary evidence that would have supported the claims it makes, such as photographs of allegedly defective ballots or video evidence of partisan poll watchers prevented from “meaningfully observing” the canvassing of mail-in ballots. If such evidence existed elsewhere, it makes no reference to it.

Citing only the unsubstantiated claims, it concludes: “For these reasons, we the undersigned members of the Pennsylvania General Assembly urge you to object, and vote to sustain such objection, to the Electoral College votes received from the Commonwealth of Pennsylvania during the Joint Session of Congress on January 6, 2021.”

Nearly 7 million people voted in Pennsylvania, which the Biden-Harris ticket won by approximately 80,000 votes, according to final results from the Secretary of State.

All voted to do so after the U.S. Capitol was attacked by pro-Trump insurrectionists who were attempting to prevent the certification of Biden’s victory in the Electoral College.

Five people died in the attack, including a Capitol Police officer, and the building was evacuated and ransacked during the hours-long siege that ensued.

A news release put out by Republican House leaders in Pennsylvania and shared by Staats via his Twitter feed on the day of the insurrection condemned the violence that was occurring, but also noted that objecting to the results was a right afforded to members of Congress.

“An objection to the electoral process is within the rights of members of Congress and has been exercised by members from both sides of the aisle at different times in our nation’s history,” the news release said. “However, that process leads to debate and dialogue, not violence and mayhem. We strongly condemn any act of violence and destruction and pray for all those impacted today.”

The release made no mention of the role many believe Trump’s repeated, debunked claims that the election was stolen from him played in fueling his supporters’ anger–and violence–nor did Staats’ tweet in which he condemned the riot and called for calm.

In response to Staats’ plea, a Twitter user named @mikeblash tweeted: “Too late. The insurrection occurred because #Republicans you continue to support #Trump and his delusions. YOU own this.”

As chaos erupts at our nation's Capitol, I join with Pennsylvania's House leaders in condemning the violence and destruction and calling for calm. https://t.co/oixErf7mWv pic.twitter.com/cyhC6CIlCR

Staats’ district includes much of Upper Bucks County, while Mackenzie represents portions of Lehigh and Berks counties in the House of Representatives.

Click here to read the Dec. 4 letter to Pennsylvania’s Congressional delegation and view all 64 signatories to it.

Rep. Susan Wild (D-7), who represents the Lehigh Valley in the U.S. House of Representatives, voted to accept Pennsylvania’s Electoral College votes on Jan. 7 and this week voted to impeach President Donald Trump for allegedly inciting his supporters who attacked the Capitol.

In the wake of the attack, there is concern by law enforcement officials about additional domestic terrorist plots involving Trump supporters, some of whom have announced protests in all 50 state capitols and Washington, D.C., on or before Inauguration Day.