A Bucks County man is facing numerous charges after Pennsylvania State Police at Dublin say he crashed the vehicle as he allegedly attempted to flee from a state Fish and Boat Commission officer Friday morning. 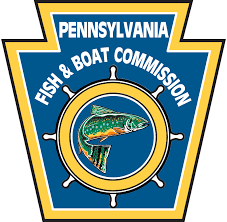 The badge for the Pennsylvania Fish and Boat Commission.

In a news release, Tpr. Kevin Shields–the investigator in the case–said Kevin C. Hausmann, 22, of Quakertown, was driving on snow-covered and “slippery” Old Bethlehem Road north of the entrance to Lake Towhee County Park in Haycock Township when the pursuit occurred.

Shields’ report didn’t say what may have led to the pursuit.

Police said that after Hausmann’s vehicle left the roadway, he struck a mailbox on the right side of the road, traveled back onto the roadway and then struck a utility pole.

The 2020 Dodge Charger Hausmann was operating sustained disabling front end damage in the crash and was later removed from the scene by Swamp’s Towing, the release indicated.

Both Hausmann and a 22-year-old male passenger from Perkasie who was not charged suffered suspected minor injuries as a result of the wreck, Shields wrote, adding that police were assisted at the scene by Fish and Boat Commission officers.

According to court records, Hausmann is facing the following charges stemming from the crash:

The criminal docket for the case indicates that following a scheduled preliminary arraignment before a Bucks County district judge Hausmann was committed to the Bucks County Correctional Institution in lieu of 10 percent of $100,000 bail.

As of Sunday court papers did not list an attorney for Hausmann or indicate that he had made bail.

A preliminary hearing in his case is scheduled to be held Monday, March 1 at 1 p.m. before District Judge Gary Gambardella, according to the criminal docket.

Note: Individuals suspected of or charged with a crime are presumed innocent until proven guilty in a court of law. This story was compiled using police and court records.