The relief-valve-like device is inserted without surgery or incisions into damaged areas of the lung to help air to escape. Recipient Charles Gadwell said he can feel his lungs working better since St. Luke’s pulmonologist Deborah Stahlnecker, DO, inserted three Zephyr valves into his left lung in February.

“I feel pretty good,” said the former Marine, National Guardsman and U.S. Postal Service employee who had struggled with emphysema after a half-century of smoking, before quitting in 2015. 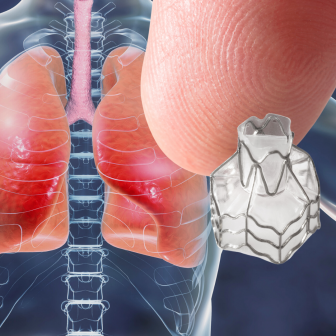 Emphysema or COPD (chronic obstructive pulmonary disease) is caused when lung tissue becomes diseased or damaged from cigarette smoking or inhaled toxic chemicals/substances. There is no cure for this debilitating, sometimes fatal condition, which may require the patient to use supplemental oxygen. Treatment with medication inhalers can be effective in some patients, but advanced COPD cases often require a lung transplant or lung reduction surgery for patient survival and improvement of symptoms.

Patients who have the Zephyr valves placed into the most damaged recesses of lung tissue report improved lung function, better breathing during daily walks and other activities, and an overall enhanced quality of life, said Dr. Stahlnecker, who is the only physician in the Lehigh Valley area currently performing this minimally invasive procedure. The Pulmonx Zephyr valve was approved by the FDA in 2018 and is the first device of its kind to be made commercially available in the United States.

Gadwell, 73, of Whitehall, who describes himself as “never one to sit,” was back on his feet a few days after the valves were implanted. Now he’s walking more than a mile each day with a goal of reaching one-and-a-half miles eventually. He’s grateful that St. Luke’s and Dr. Stahlnecker offered this new treatment that has improved his lung function.

Dr. Stahlnecker uses a long camera-tipped tube, called a bronchoscope, to implant the barrel-shaped, hollow device with a flared end through the patient’s mouth and into the lung. Because of the often-extensive tissue damage common to COPD, it is often necessary to implant multiple valves into the lung. During the procedure, which takes about an hour, the patient is under general anesthesia. No cutting is required to access the diseased tissue or affix the valve within the lung, as it is designed to expand to fit the airway into which it is placed.