Have you ever driven on Harwi Street in Hellertown? If you have, you may have noticed the unusual name, which was shared by one of Hellertown’s former postmasters. Harry Harwi was 36 years old and serving in that capacity in January 1918, when horseplay inside a borough social club prematurely ended both his career and his life. It’s unclear if the small side street is named for him, but it would only be fitting if it were. In what may have been unusual at the time, Harwi’s widow was appointed his successor shortly after his death. At that time, American women still had not been granted the right to vote.

While engaged in a friendly sparring bout with a friend Friday night in the rooms of the Night Owl Social Club at Hellertown, Postmaster Harry J. Harwi tripped on the carpet and fell, his head striking the wash board. Concussion of the brain resulted in his death at three o’clock Saturday morning without regaining consciousness. Deceased was well and favorably known in Hellertown and was appointed postmaster on April 1, 1914. He was active in the civic and industrial development of the borough. He was born in Hellertown, Nov. 6, 1881, a son of Mary and the late J. David Harwi, and was thirty-six years, eleven months and twenty-nine days of age. He was a member of Saucona Lodge, No. 606, I.O.O.F.; Hellertown Castle, No. 112, K.G.E.; Dewey Fire Company; Washington Camp, No. 175, P.O.S. of A., and Secretary of Christ Union Sunday School. The widow, Flora (nee Boehm) and two sons, Wilbur and Elroy, at home, and the mother survive. The funeral will occur on Thursday afternoon. Services will be held in Christ Union Church and interment will be made in Hellertown Cemetery.

The unexpected death of Hellertown’s young, popular postmaster in 1918 likely stunned many in the community. This story about Harry J. Harwi’s ending was published in the Jan. 7, 1918 issue of The Morning Call.

The following article published by the Morning Call on March 28, 1918 details the appointment by President Woodrow Wilson on the recommendation of U.S. Congressman H.J. Steele of Harwi’s widow, Flora Harwi, to the office of Hellertown Postmaster he had held prior to his death. The salary of $1,250 she was to be paid would equal approximately $22,100 in 2021 currency, when the rate of inflation is calculated. Both Harry Harwi and Flora Harwi are buried in Union Cemetery in Hellertown. Following her husband’s death, Flora Harwi remarried. She died in January 1971 at the age of 89, having outlived her first husband by 53 years. 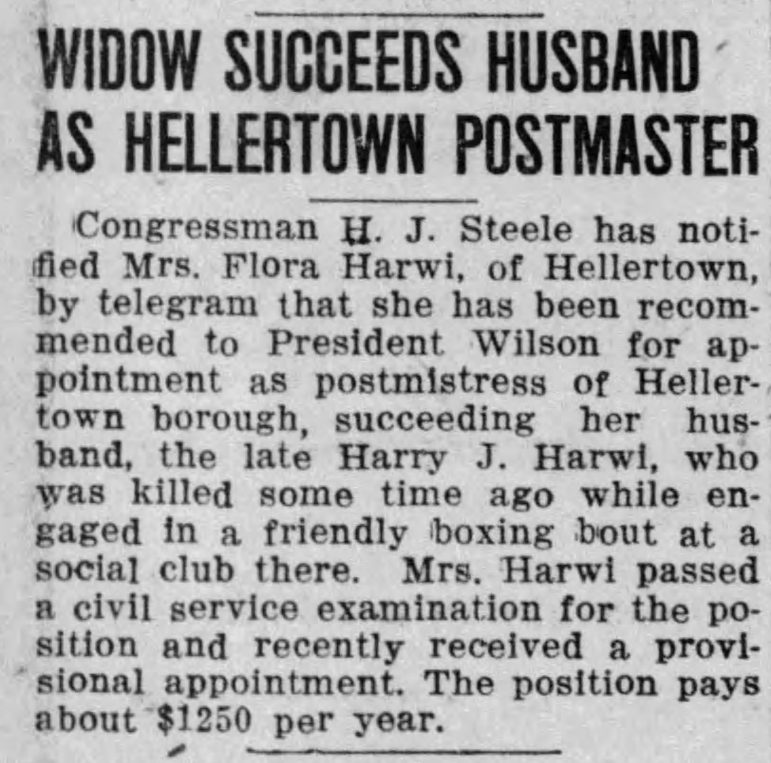