HARRISBURG — Pennsylvania voters on Tuesday approved two ballot questions that would curtail the governor’s emergency powers; a victory for Republican lawmakers in what was widely seen as a referendum on the Wolf administration’s response to the coronavirus pandemic.

Unofficial results show 54 percent of voters backed amending the state constitution to allow a simple majority of lawmakers to terminate a disaster declaration at any time. Currently, such a declaration can only be ended with the governor’s consent or with support from two-thirds of the General Assembly.

Roughly the same percentage of voters approved a proposal to limit a disaster declaration to 21 days, instead of 90, and transfer power to extend an emergency order from the governor to the legislature. The Associated Press projected Wednesday morning that voters had approved both measures, with 73 percent of the total estimated votes counted.

Previously little noticed, Pennsylvania’s disaster declaration process became a political flash point for Republicans, who–with support from a few Democrats–championed the proposals as a check on an executive they repeatedly clashed with over the state’s pandemic response.

“A yes vote does not take power away from the governor,” Senate Majority Leader Kim Ward (R., Westmoreland) said in April. “Rather, it brings back the balance of power by giving the people a say in how to manage their communities during emergency situations.” 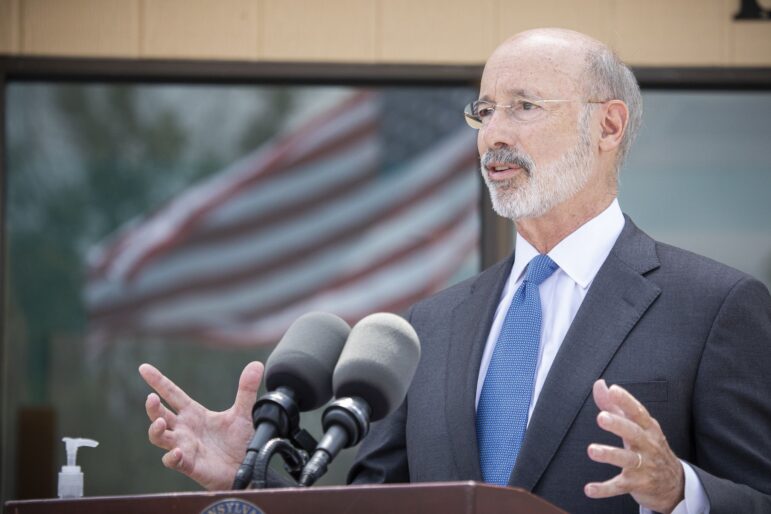 Perhaps no decisions by the Wolf administration were as reviled in the GOP-controlled legislature as the ones to temporarily close businesses deemed nonessential and stagger the economy’s reopening to slow the spread of COVID-19. Preventing a similar situation in the future became a selling point as they urged voters to approve the amendments.

The Wolf administration forcefully pushed back on the argument that it can only mandate business closures when a disaster declaration is in place, saying that power resides with the state’s health secretary.

Wolf administration officials argued that inserting lawmakers into the process would take away flexibility when it’s most needed. These emergency orders are traditionally issued during weather-related events like floods or snowstorms so state officials may temporarily waive regulations, allow agencies to purchase supplies without going through the regular procurement process and transfer money to cover relief expenses.

“The impact of these amendments should not be viewed solely through the context of the COVID-19 pandemic, as they have far-reaching impacts for all future disasters regardless of cause,” Randy Padfield, director of the Pennsylvania Emergency Management Agency, said earlier this month.

Wolf on Wednesday said his administration would not challenge the results and had met with GOP leaders to discuss next steps. The current pandemic disaster declaration is set to expire at midnight Thursday.

“The voters have spoken,” he told reporters. “And we’re going to do what I think the voters expect us to do and to make the best of it.”

Voters this week also approved two additional ballot questions, unofficial results showed: one that would amend the state constitution to enshrine antidiscrimination protections for people based on race and ethnicity, and a statewide referendum that would make fire companies with paid personnel eligible for an existing loan program for volunteer departments.

The process to amend the Pennsylvania Constitution begins in the legislature, where lawmakers must approve identical proposals in two consecutive sessions. After that, the Department of State is directed to advertise the proposed amendments and write the language that appears on the ballot.

Republican leaders had accused the agency of trying to sabotage the disaster declaration amendments with “prejudicial language,” though they declined to take formal action and instead said they would take their case to the voters.