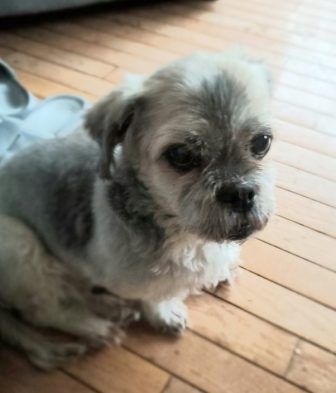 “Heaven,” a 15-year-old Shih Tzu, wandered away from her home on Polk Valley Road in Lower Saucon Township around 7 a.m. on Saturday, July 17. Her owner is asking the community for help locating her. Carolina Rosa said she is especially concerned for her dog’s safety because of her age and frailty.

A local dog owner is asking for the community’s help with finding her beloved Shih Tzu, who is 15 years old and named Heaven.

Carolina Rosa said Heaven wandered from her home in the 2100 block of Polk Valley Road in Lower Saucon Township Saturday morning at around 7 a.m.

Rosa said she is particularly concerned about her small dog’s safety, in part because of her advanced age and diminished ability to fend for herself.

“She is hard of hearing, a bit blind and has Alzheimer’s,” she said, adding that Heaven has even been known to get stuck in a couch corner in her home due to the effects of aging.

Heaven is friendly, Rosa said, and has white and gray hair. She also has several cysts on her body, two of them being on her tail and chest.

After Heaven disappeared, Rosa said she posted about her lost dog on Facebook and began contacting local animal shelters as well as posting flyers in the area.

On Sunday, she said a neighbor told her she’d seen Heaven near the intersection of Polk Valley and Reservoir roads on Saturday at around 9:30 a.m.

“I’m so worried about her. (I’m worried) that she probably hasn’t eaten or drunk in three days,” Rosa said in an email Tuesday. “Please help me.”

As of Tuesday afternoon, a Facebook post about her missing dog had been shared a number of times.