Pennsylvania State Police at Dublin are asking the public to help them identify in a road rage case incident involving a firearm which they say happened in June in Richlandtown borough and Richland Township, Bucks County.

In a news release published on their Crimewatch site Tuesday, police said the man–who is described as a white male–allegedly pointed a black semi-automatic pistol at another motorist “several times in the area of Church Road at North Main Street, Richlandtown borough, and Richlandtown Pike at E. Pumping Station Road, Richland Township.”

Police released a photograph of the suspect’s vehicle, which they described as “an older model Nissan Frontier with a full enclosed cap and numerous stickers on the tailgate.” 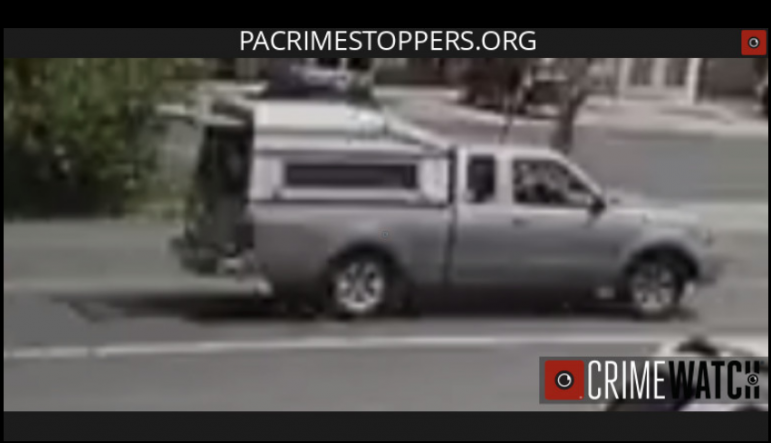 Pennsylvania State Police at Dublin released this photograph of a suspect vehicle in a road rage incident Monday. Police said it occurred in Richlandtown borough and Richland Township, Bucks County, in June, and that the truck was operated by a white man who pointed a black semi-automatic pistol at another person in that area. Troopers are asking for tips in the case.

The news release noted that the vehicle may have been displaying a North Carolina license plate, and may frequent Northampton and Lehigh counties.

The incident itself happened around 2 p.m. on Thursday, June 10, 2021, police said, and is being investigated as a case of suspected aggravated assault.

Anyone with information about the incident or the driver of the vehicle is asked to anonymously contact the Pennsylvania Crime Stoppers toll-free hotline at 1-800-4PA-TIPS (8477) or online. All callers to Pennsylvania Crime Stoppers remain anonymous and could be eligible for a cash reward for information that leads to an arrest, the solving of a crime/cold case or the location of a wanted person/fugitive or missing person.