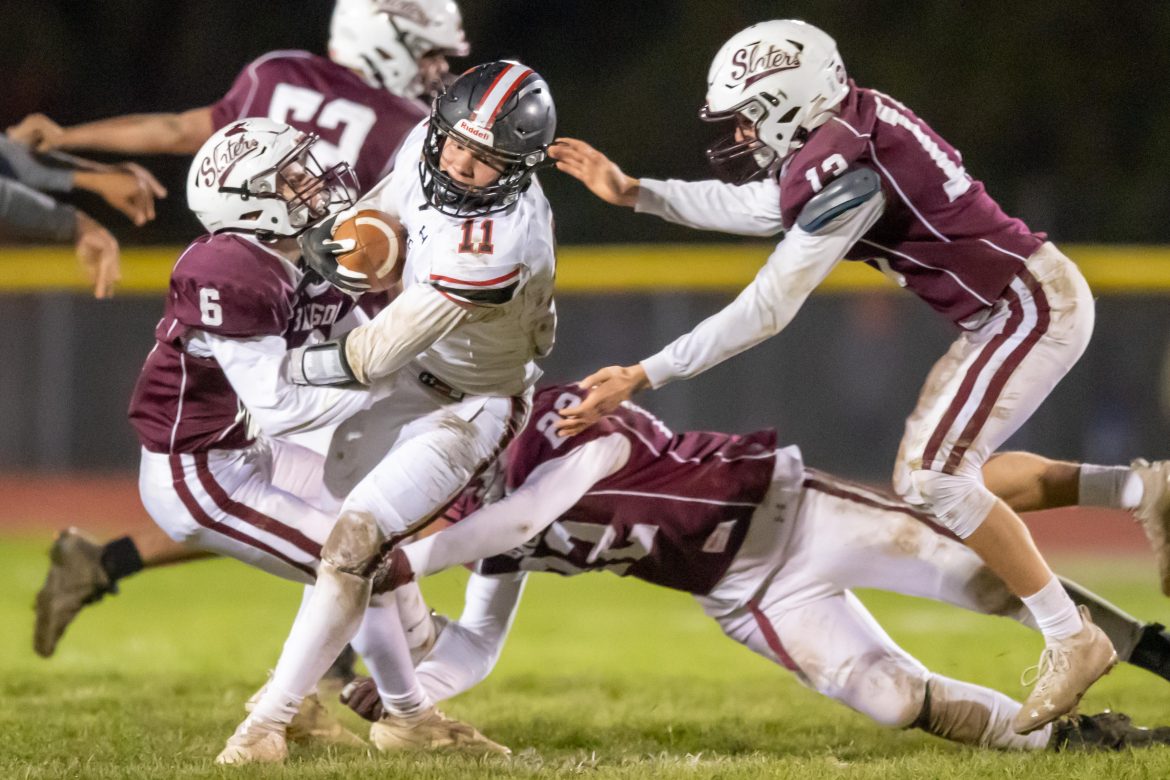 The Saucon Valley Panthers and Bangor Slaters earned the right to extend their season and compete in the Eastern Conference Championship football game this past Thursday night.  The ECC started in 1922 and was once the prized, de facto state title game.

At the end of the regular season an Eastern Conference invitation is extended to the top two teams in the eastern half of Pennsylvania who have not qualified for the PIAA district playoffs.  In District XI it was Northwestern Lehigh, Pottsville, Allentown Central Catholic and Wilson who were the top four seeds in the PIAA District XI 4A classification.  Bangor as the five-seed and Saucon as the six-seed were left on the outside looking in.  Out of all the other eastern PIAA districts in the 4A classification, it was Bangor and Saucon who had the highest points based on their performance throughout the season.  The ECC was an opportunity for the Panthers and Slaters to get one more week of practice and one more week of competition.  The Panthers previously competed in the ECC in 2013 (Wilkes Barre Coughlin) and 2007 (Pen Argyl).

So, it was with a depleted roster, the Saucon Valley Panthers limped off the bus to battle the Bangor Slaters on Thursday night in the Eastern Conference Championship game.  The Panthers were missing a handful of starters including four-year starting quarterback Dante Mahaffey.  In addition, Saucon Valley was without the services of Jack Marouchoc, Jared Rohn, Owen Frederick and others.  Saucon Valley had beaten the Slaters during Week-6 of the season 36-22.

After Saucon Valley was forced to punt on their opening possession after going 3-and-out, Bangor crafted a 10-play drive for points.  The drive featured ten straight running plays and finished with a 4-yard score around right end by Slater quarterback Eric Striba.  The PAT was good and at 5:01 of the first quarter Bangor led Saucon 7-0. 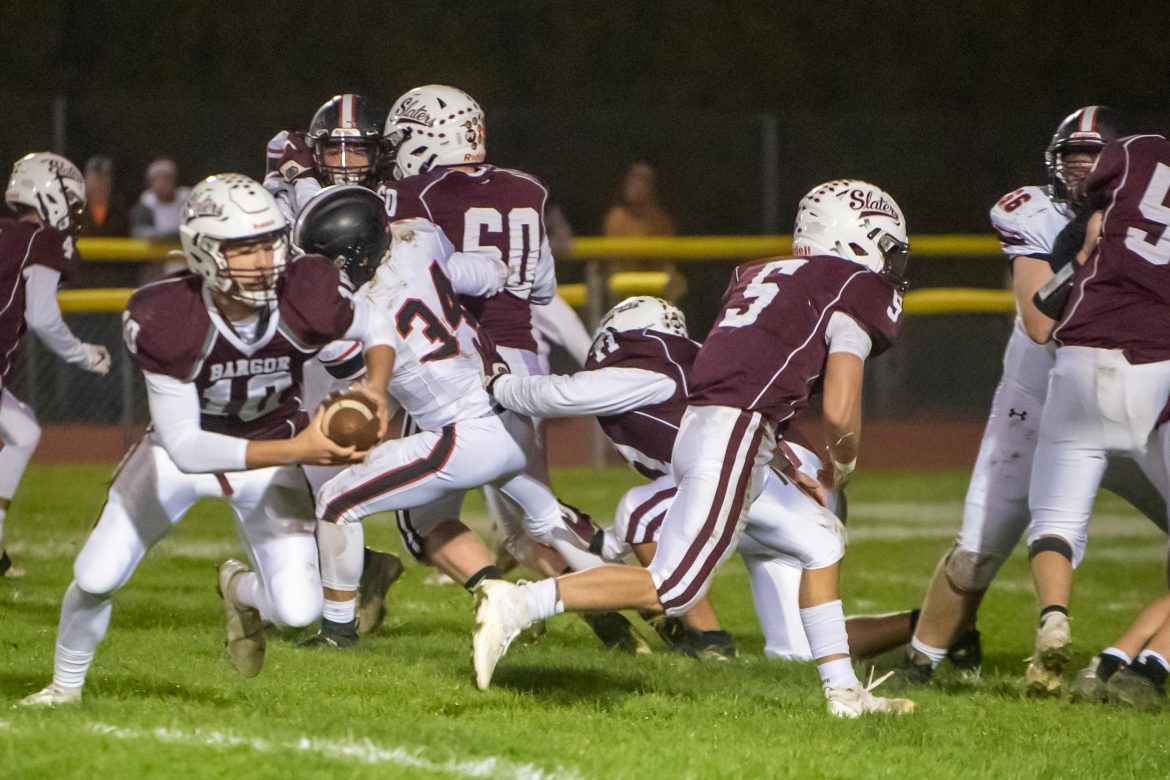 Behind a makeshift offensive line including three freshmen, the Panther once again were forced into a three-and-out punt.  The Slaters used eleven run plays to move the ball from their own 28-yardline deep into Panther territory.  On 3rd & Goal from the 12-yardline, Bangor quarterback found running back, Kael Godschalk, in the endzone for a touchdown pass.  The PAT was no-good, but with 8:27 left until halftime, Bangor took a 13-0 lead.

Saucon Valley managed to grind out a couple of 1st-downs on their next possession, but turned the ball over on downs at their own 40-yardline.  Bangor capitalized five plays later when Striba ran a quarterback draw for a 19-yard score. Striba’s touchdown was followed by a successful 2-point PAT and Bangor took a 21-0 lead into the locker room for the halftime break.

The Panthers started the second half with an unsuccessful onside-kick attempt.  Five plays later the Slaters were back in the end zone.  Kael Godschalk found a crease in the Panther defense around the right side and found paydirt.  The extra-point was good and added to a 28-0 Slater advantage early in the third quarter. 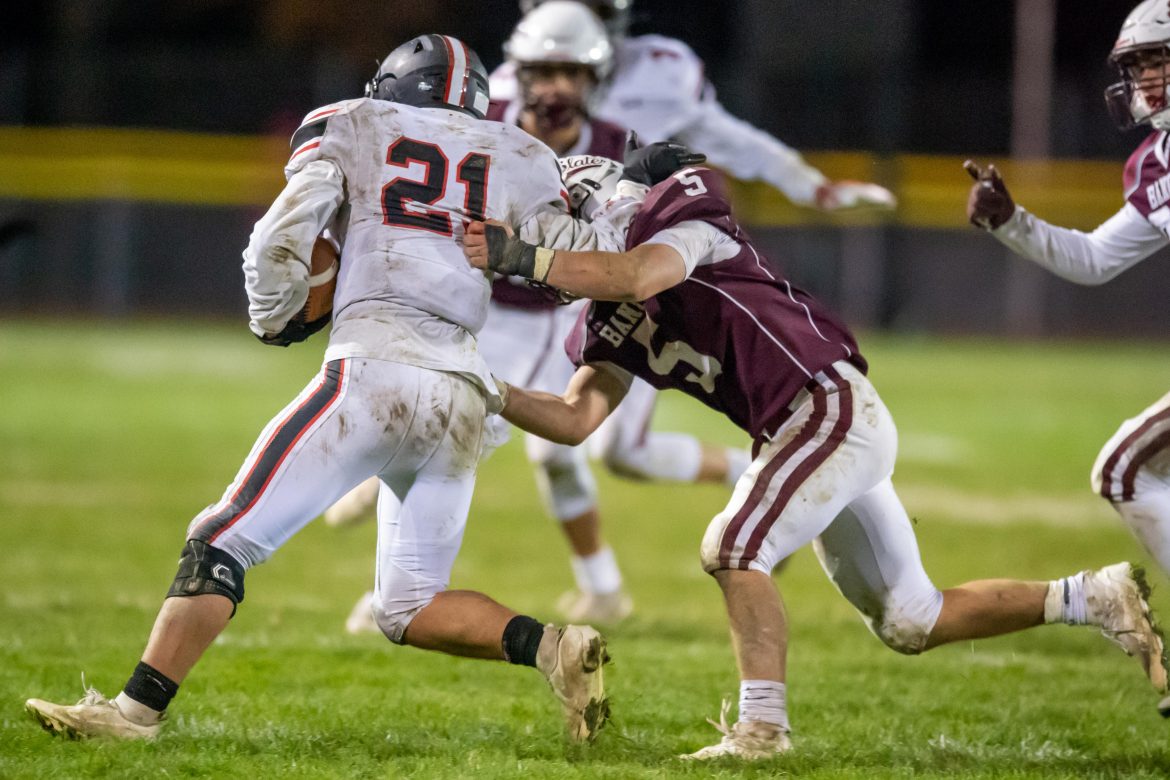 Saucon was held to only 13-yards rushing, but Damian Garcia was able to finally find the end zone for the Panthers.

Saucon Valley showed some life and used a mix of pass and run to stagger 65-yards for a score.  Saucon senior Damian Garcia pounded the ball up the gut for a 1-yard touchdown.  Jacob Christopher hit the extra-point and with 2:46 left in the third quarter the Panthers trailed  28-7.

Any Panther momentum was immediately squashed after two plays when the Slaters Kael Godschalk popped the Panther defense and scampered for an 80-yard score.  Ty Csencsits was able to block the extra-point kick, but Bangor extended their lead to 34-7 with two minutes remaining in the third period. 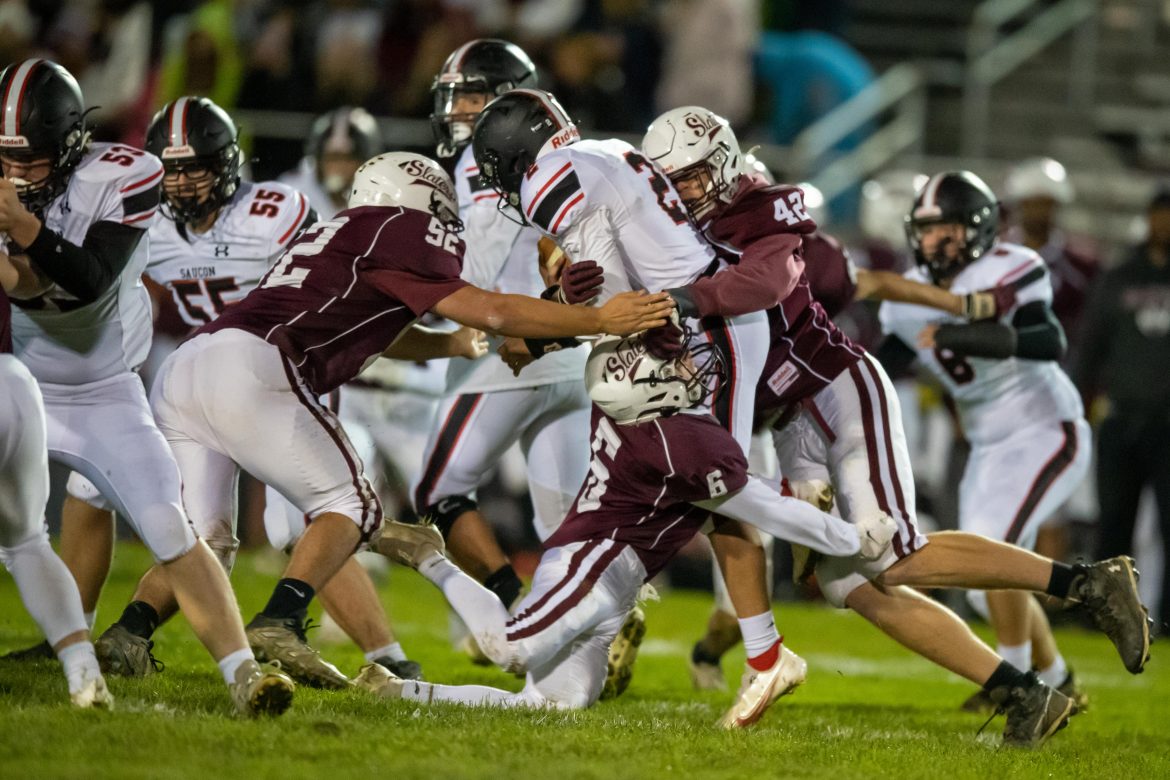 It was tough sledding for Travis Riefenstahl and the Saucon Valley Panthers in the 2021 Eastern Conference Championships.

Things went from bad to worse on the Panthers next two possessions. On 1st & 10 from his own 40-yardline, Saucon Valley quarterback Travis Riefenstahl scrambled to his right and served up a pick-6 interception to Bangor’s Ashton Kluska when Kluska undercut an out-route.  The Slaters opted for and were successful on their 2-point PAT .  The conversion made the score 42-7.  With a 35-point advantage, Bangor started the mercy-rule clock.

On the next possession the nightmare continued when Kluska once again picked-off another Panther pass attempt.  This time the Bangor offense took possession at the Panther 40-yardline and four plays later Godschalk made it 49-7 with a 4-yard score up the middle.

Saucon Valley mopped up all scoring with a 42-yard touchdown pass when Riefenstahl hit Ty Csencsits on a crossing route.  The 2-point try was no good and the 2021 4A Eastern Conference Championship game ended in lopsided fashion with a 49-13 Bangor victory. 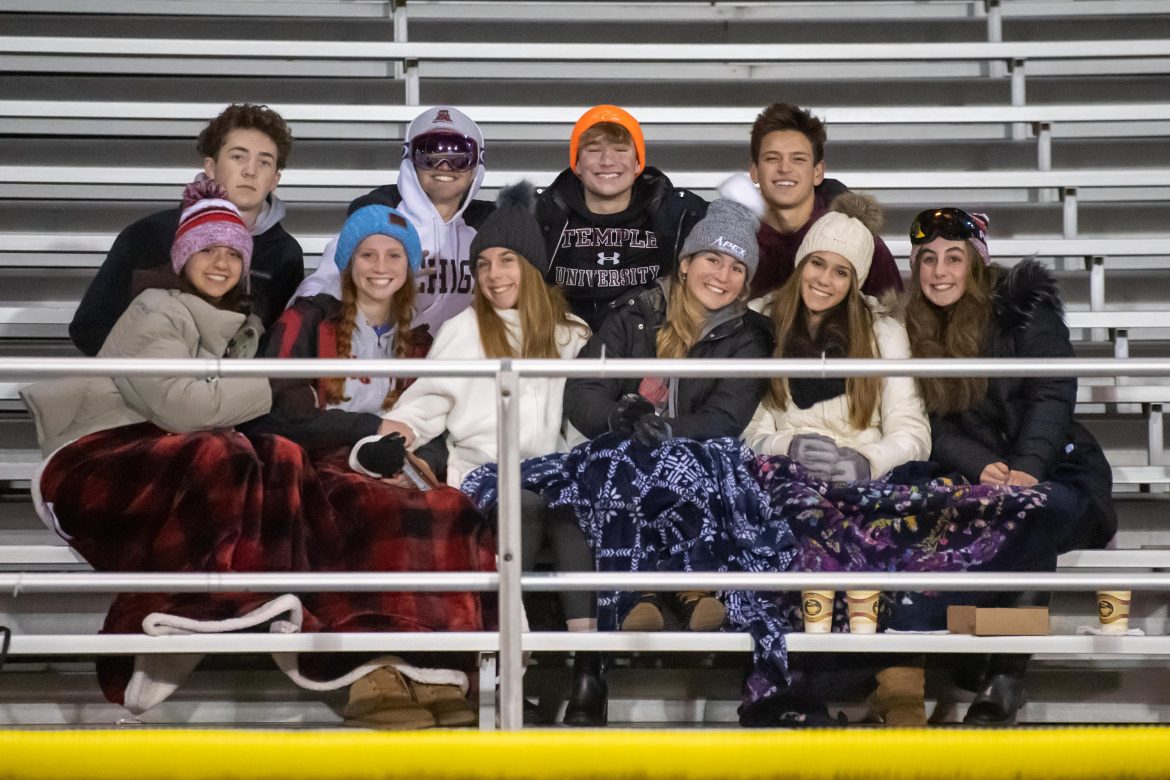 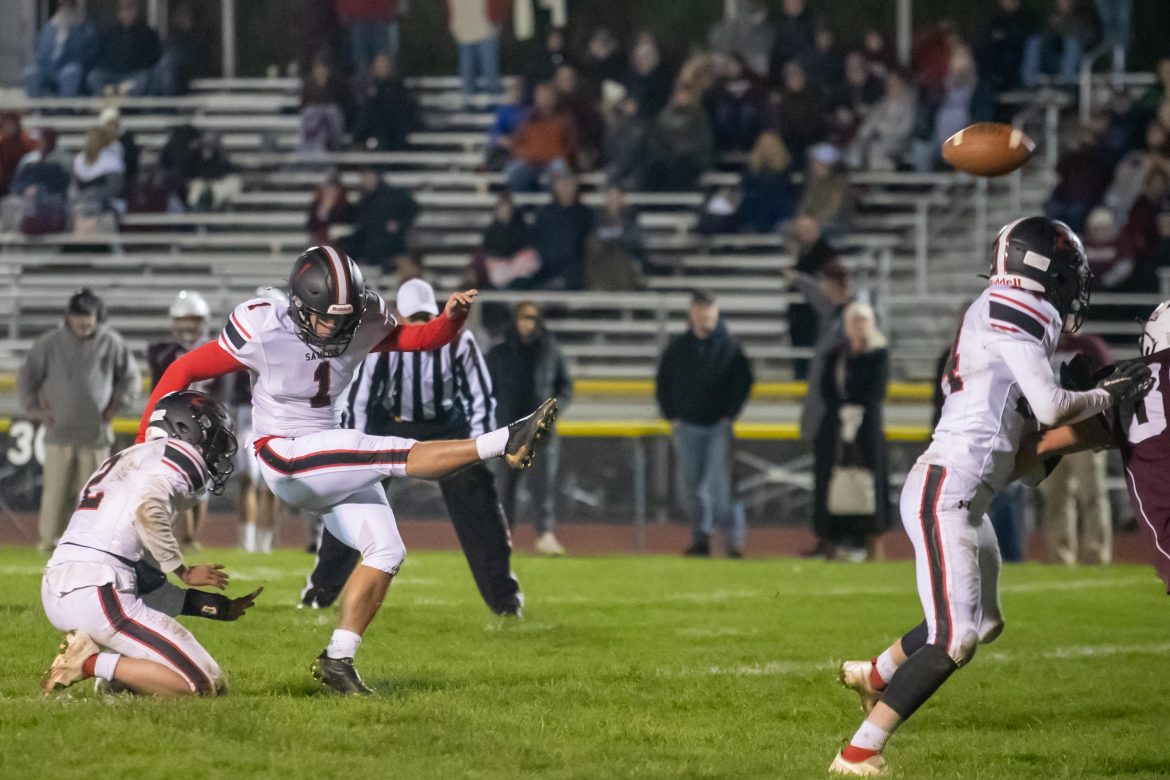 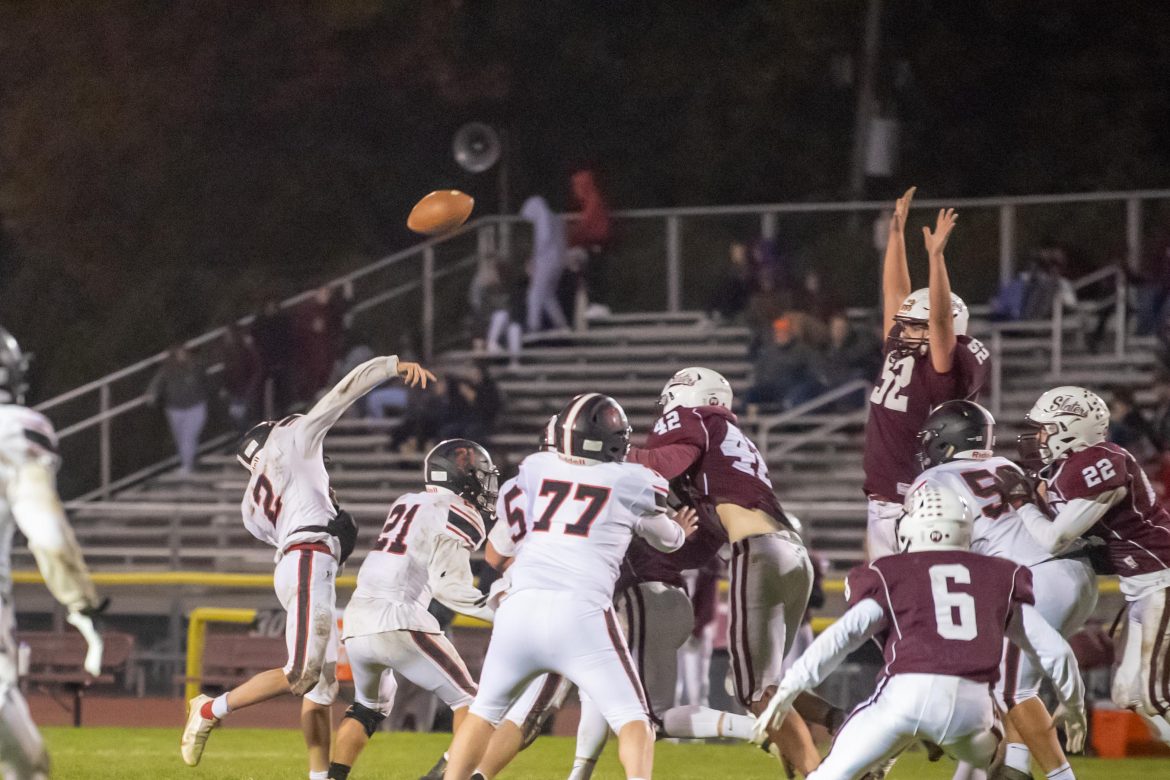 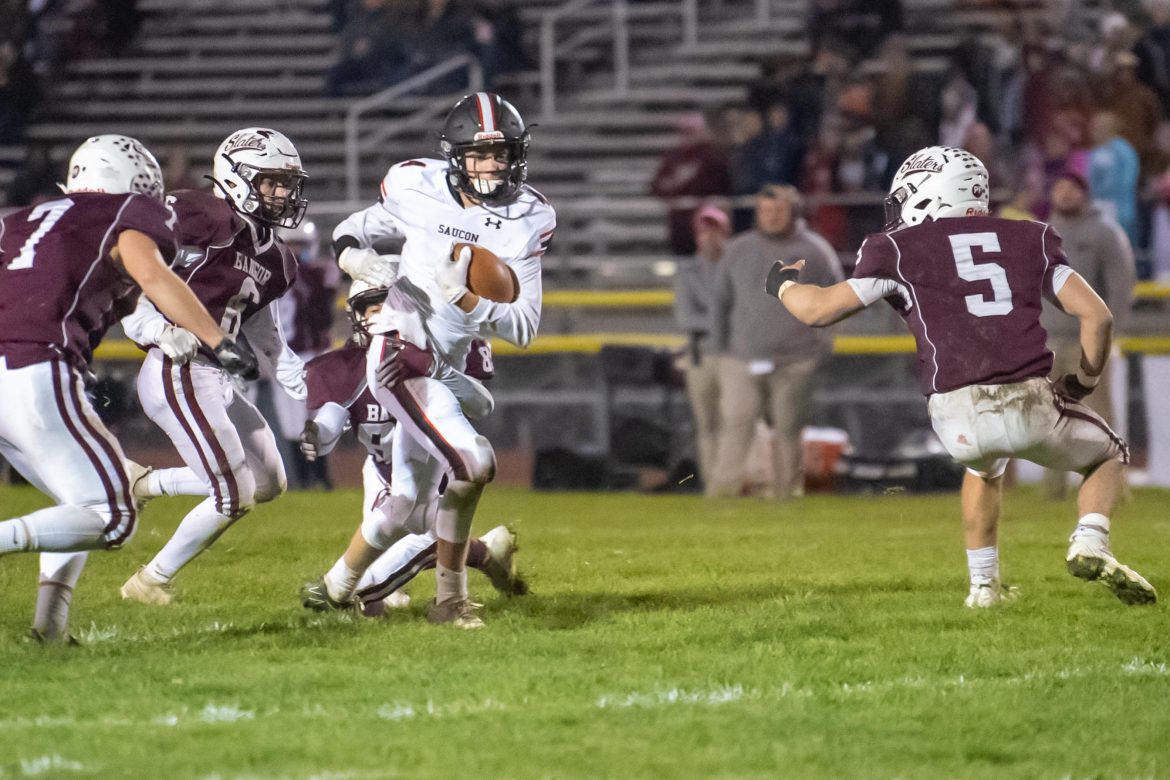 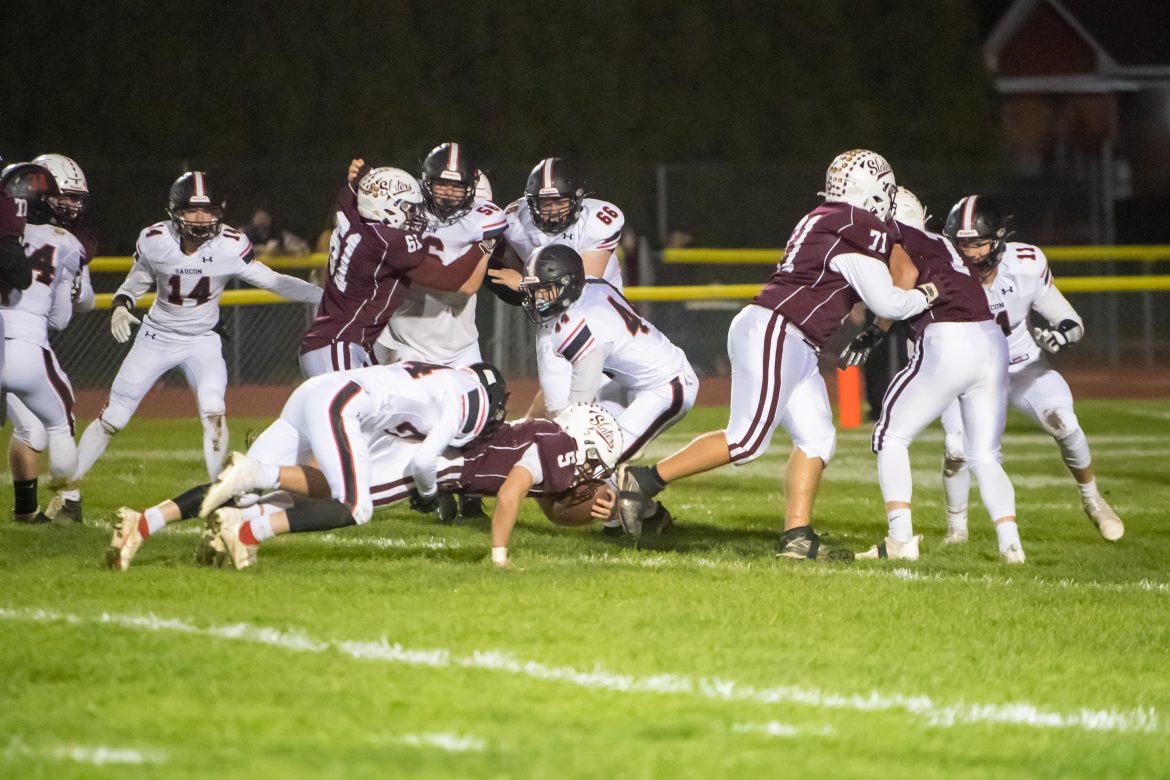 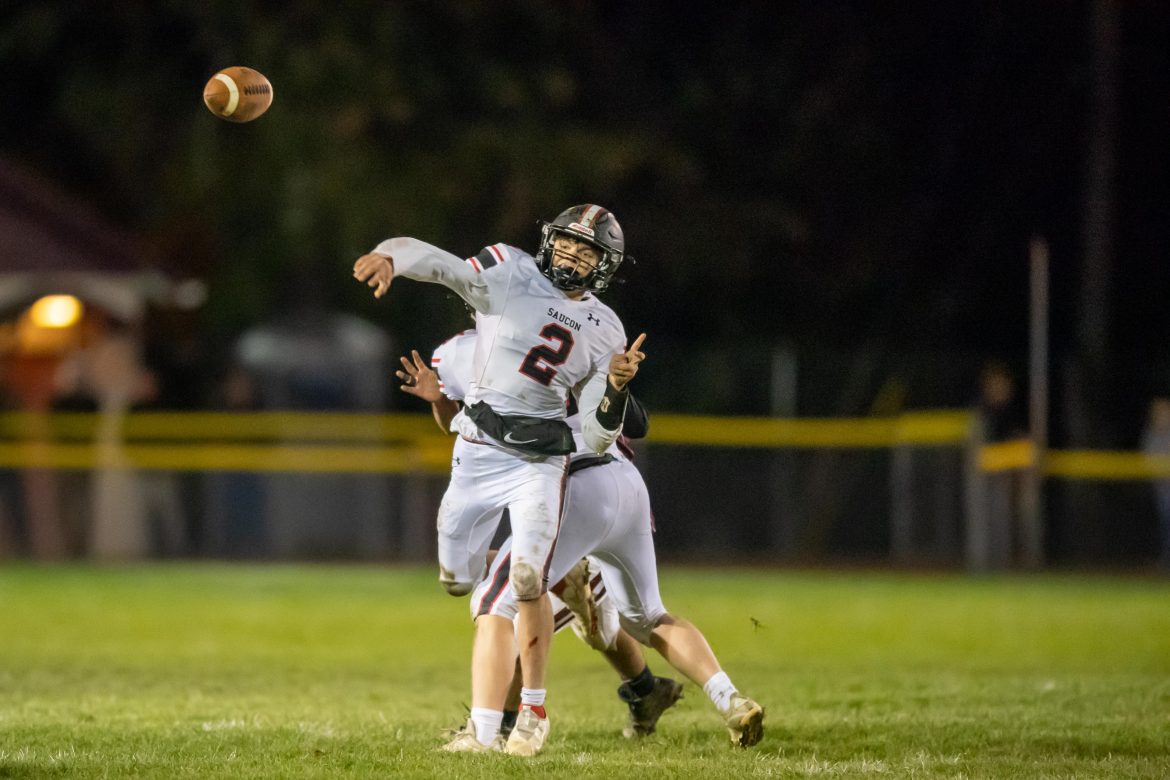 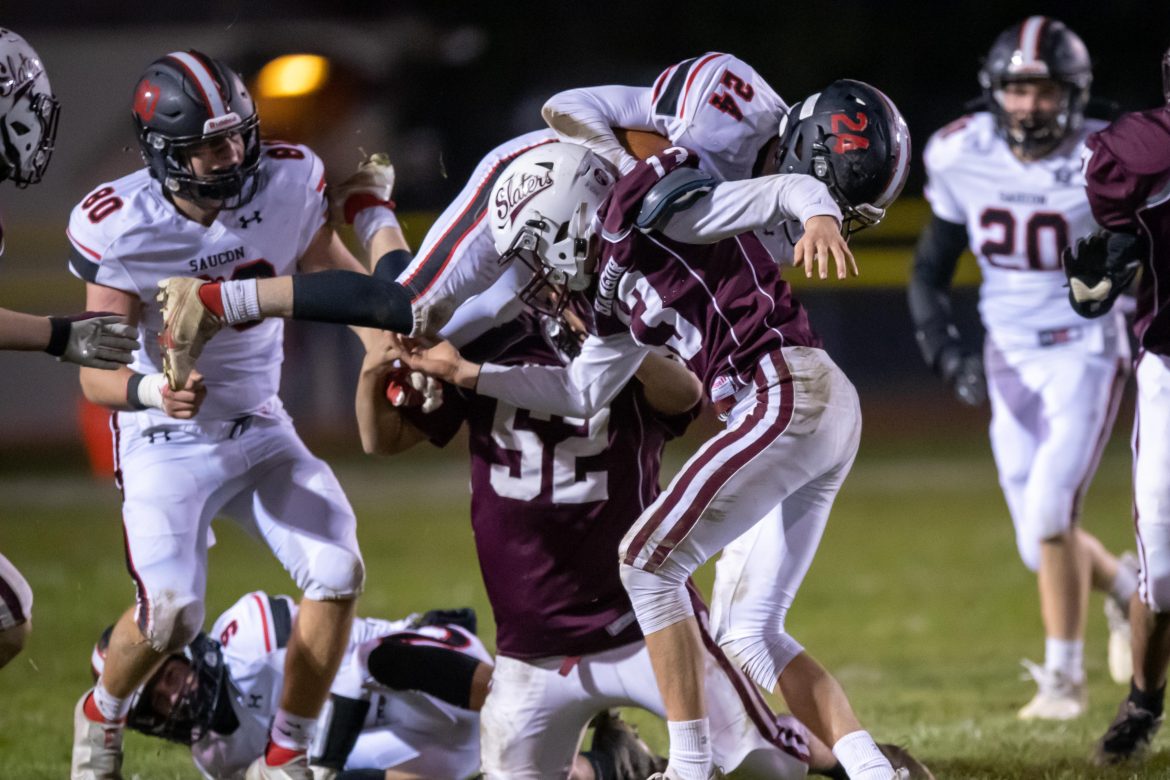 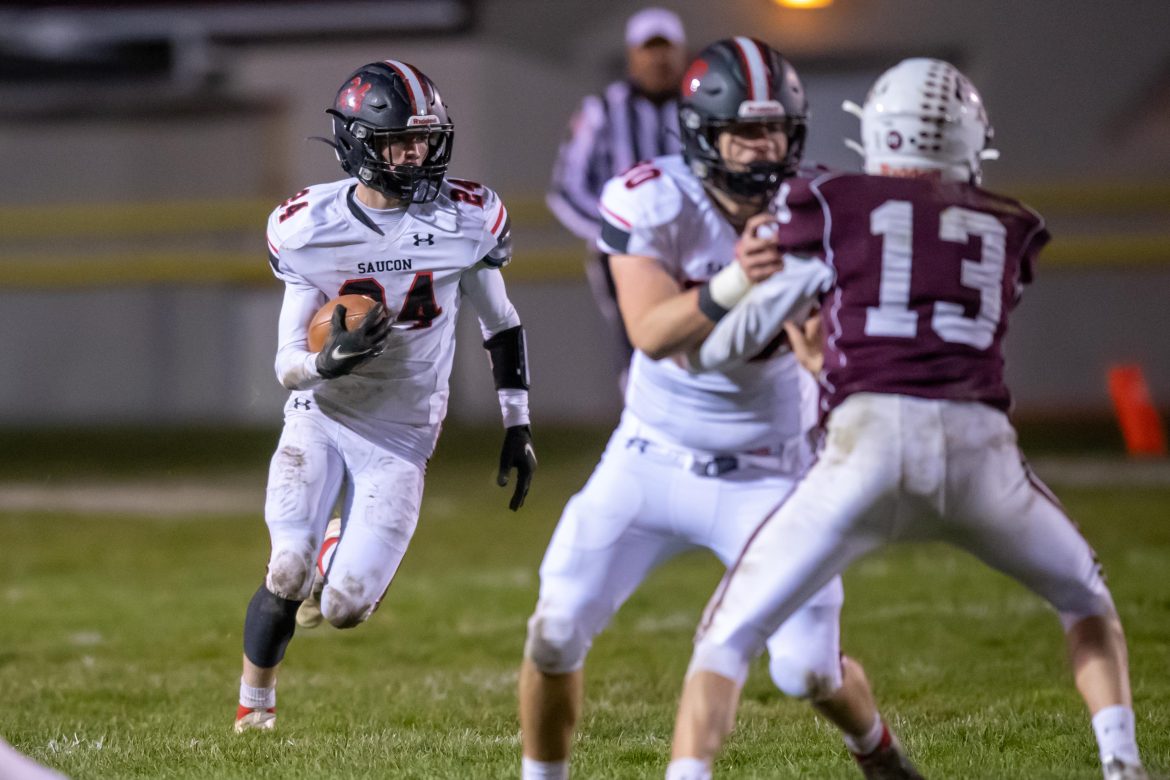 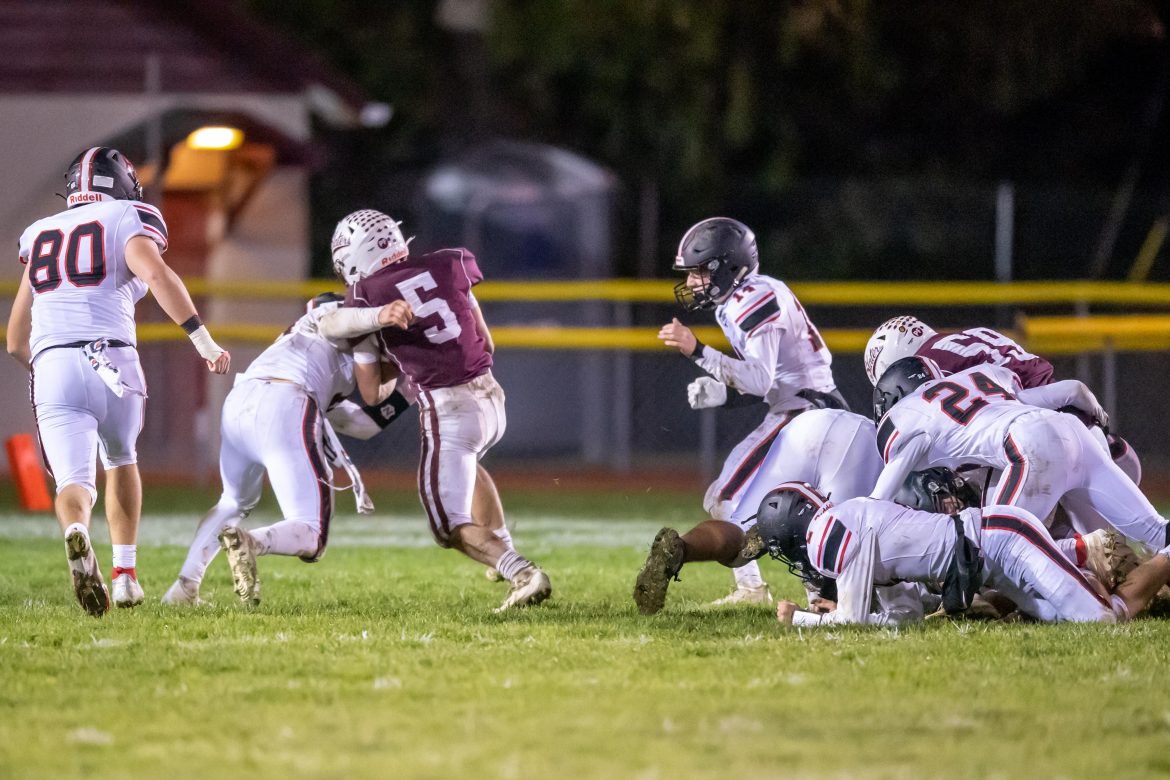 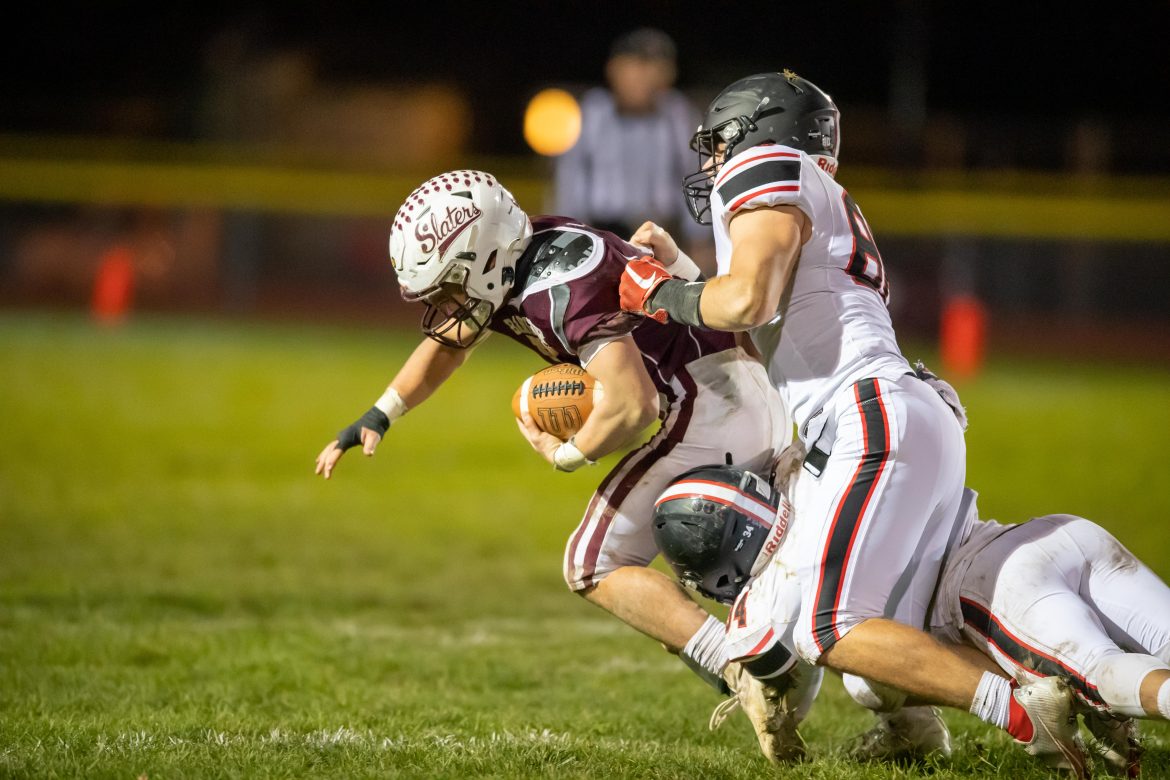 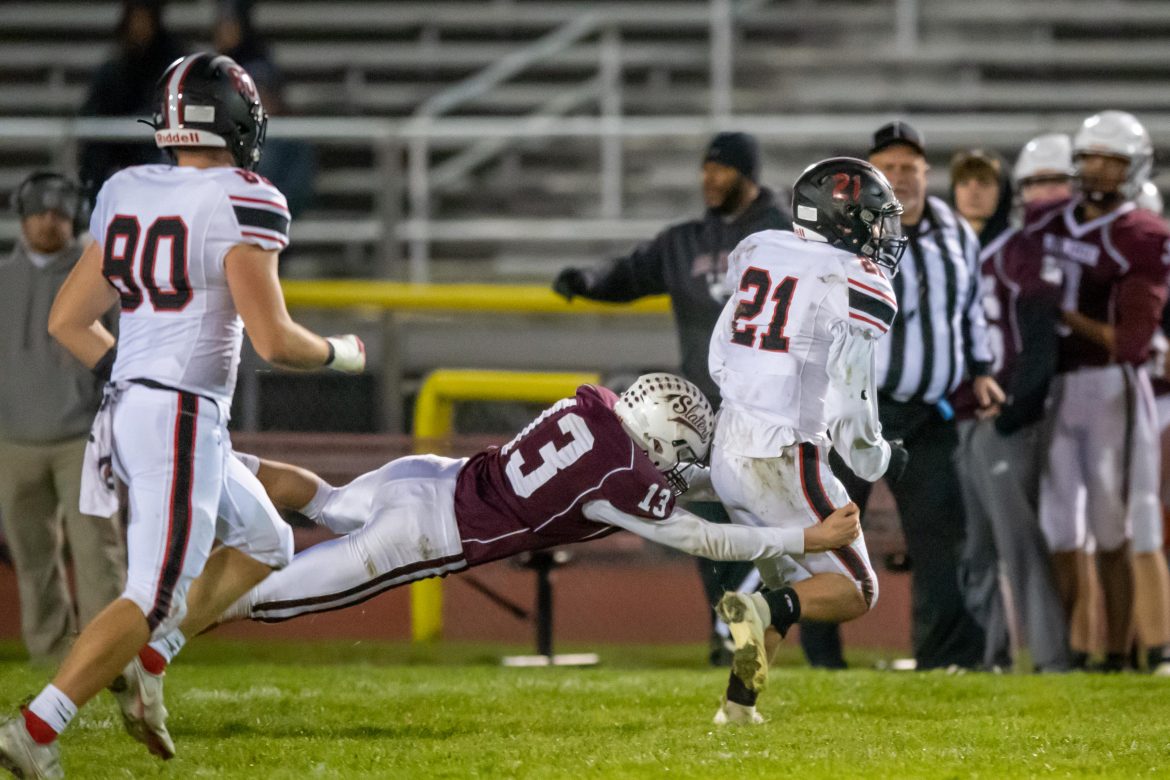 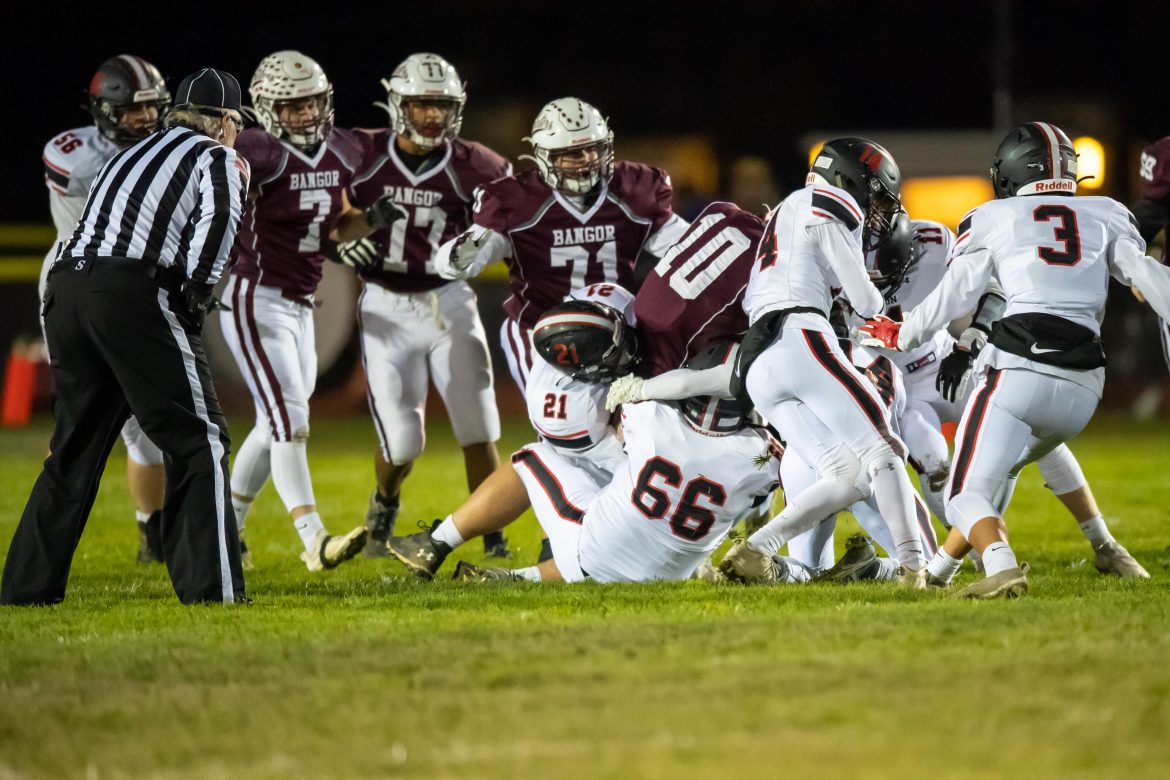