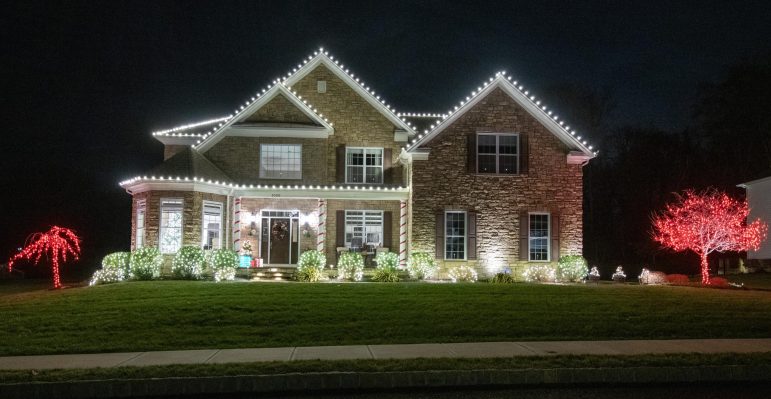 The Roberts home on Bellflower Lane in Center Valley is outlined by hundreds of twinkling white lights. Two trees covered in red lights help to accent it at each end, and thousands more white lights covers shrubbery around the home.

His mission there was to present a prize to the winners of Saucon Source’s 2021 Holiday Lights Contest & Tour: Tim and Maria Roberts, whose stunningly-illuminated home on Bellflower Lane won the hearts–and votes–of more than 100 readers. 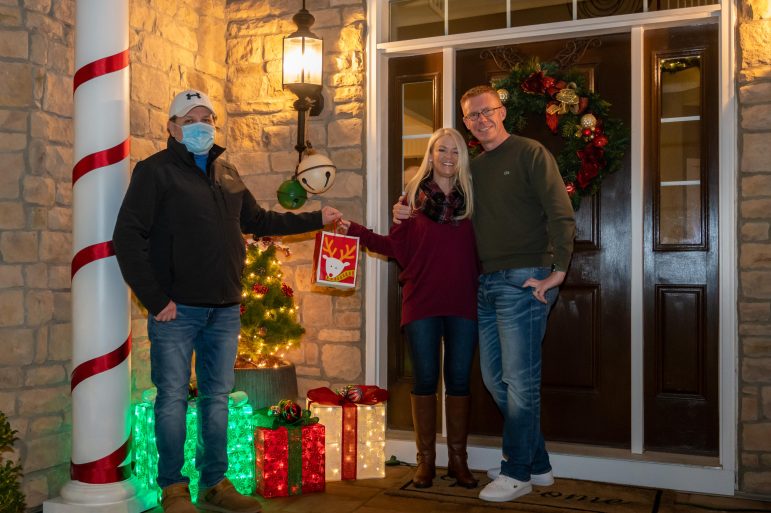 The Robertses hail from the United Kingdom and confessed that decorating with lighting for the holidays there isn’t the big deal that it is in the U.S. But their family and friends across the pond were delighted to hear that their display was judged to be the best here.

For winning the contest, which has become an annual Saucon Source tradition, the Robertses received gift cards from several Saucon Valley eateries, including Chefmeals & ChefStreet Kitchen, DiMaio’s Italian Ristorante & Pizzeria and Art Cafe, along with a $100 grand prize. In the true spirit of the season, they said they plan to donate their winnings a local animal shelter, as well as match the donation. They also received a printed photograph of their home suitable for framing from Chris Christian Photography.

Although their neighborhood has more than its share of beautifully decorated homes, Maria said they regularly see cars stopped in front of theirs, which is outlined with white lights and accented by two small trees covered in red lights. Thousands more white lights cover shrubbery around the home, which also has a front porch decorated for Christmas.

“I’d like to thank everyone who took the time to enter this year’s contest and vote in it, along with the businesses that provided part of our prize,” said Popichak. “We had roughly 15 home entries which received nearly 500 votes in total.”

“This contest is something I hope to continue sponsoring in years to come, not only because of the recognition it brings homeowners, but also because of the joy sharing their photos brings me,” he added. “I know our readers also enjoy seeing these beautiful, creative light displays, and I hope that next year we’ll have even more entries to share.”

To view all of this year’s contest entries as well as the tour map, please click here.