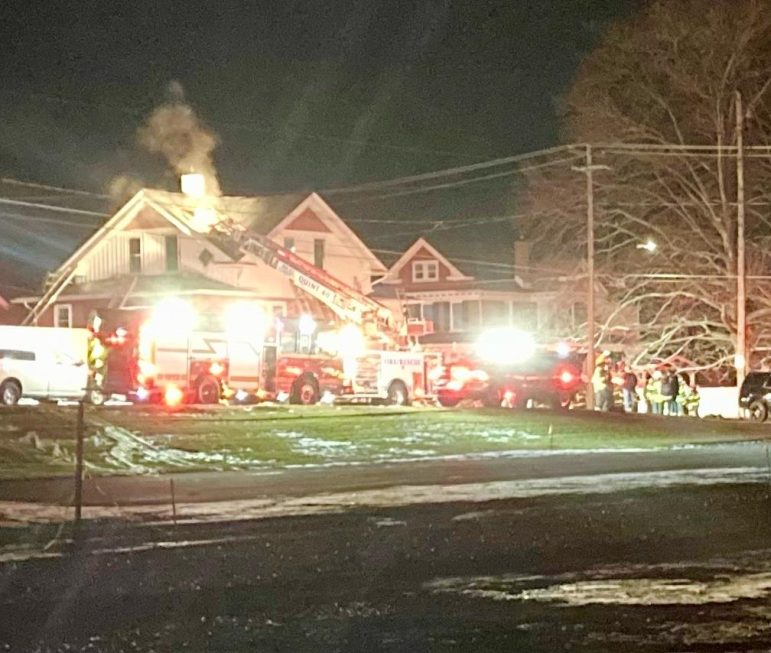 Firefighters from throughout the area extinguished a blaze in a home in the 200 block of Northampton Street in Hellertown borough early Saturday evening. There were no reported injuries as a result of the fire, which broke out on an evening when temperatures were in the low teens in the Hellertown area. The fire’s cause remains under investigation. (Contributed Photo)

A Hellertown house fire that broke out on a bitterly cold Saturday evening was quickly extinguished by volunteer fire companies who responded to the scene.

The fire in a single-family dwelling at 269 Northampton Street drew a large response by fire, police and EMS crews, with witnesses reporting that firefighters cut a hole in the home’s roof in order to knock down the smoky blaze.

Neighbors also reported that a dog was rescued from inside the house, and that the family who lives there wasn’t home at the time of the fire.

There were no reports of injuries as a result of the fire, which remains under investigation.

The temperature at the time of the fire was in the low teens and was forecast to drop to around 1 overnight, so any standing water in the area of the fire was likely to freeze up.