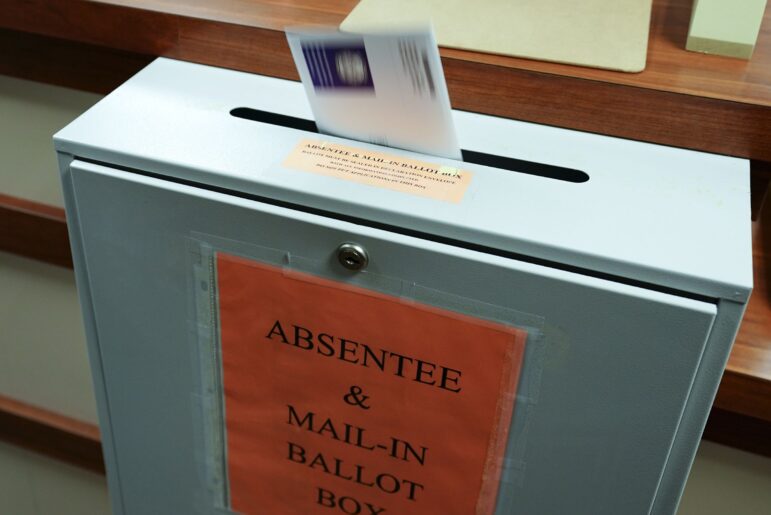 A ballot is deposited in a drop box at the county clerk’s office in Erie, Pa., in 2020. (FILE PHOTO)

If you live in Lehigh County and plan to vote by mail-in ballot in the May 17 primary election, District Attorney Jim Martin wants you to know the Election Code forbids most voters from depositing ballots other than their own in secure drop boxes and mailboxes.

In a news release his office issued Tuesday, Martin said those who ignore the law could face prosecution and a stiff penalty that includes a fine and/or jail time if convicted.

“Under the law, a person may deposit only one ballot envelope; their own, when returning a mail-in ballot at either a mailbox or a drop-box,” the release said. “Voters should be aware that it is a violation even if the voter only deposits his/her spouse’s or another family member’s ballot in addition to their own.”

The only exception to the law is for individuals acting as designated agents for someone who is physically unable to mail in or drop off their own ballot due to a disability; typically someone from within the same household. Both the designated agent and the voter must complete a form available online in English and Spanish at Vote.pa.gov attesting to the fact that the ballot will be returned by the designated agent.

The current warning on ballot drop boxes does note that “third-party return of ballots is prohibited unless assisting a disabled voter or an emergency absentee voter,” according to an April 26 letter from Martin to Lehigh County officials. “In my opinion, although accurate that is an obscure warning placed on an obscure location on the box,” he said.

Instead of the current language, Martin recommended that the Election Code’s stronger terminology be used; that it be placed in a more conspicuous location on the boxes; and that freestanding signs be deployed to convey the same message at all of the drop boxes.

“Return only your ballot. If you deposit any other ballot envelope but your own, you are in violation of the Pennsylvania Election Code, guilty of a misdemeanor of the third degree, and upon conviction shall be sentenced to pay a fine not exceeding $2,500, or be imprisoned for a term of up to two years, or both. 25 P.S. § 3553”

In addition to more obvious warnings, Martin’s office is also recommending that all county drop boxes only be available for ballot drop-offs between 8 a.m. and 5 p.m.

In his letter to county officials, Martin said “there should at least be a belief by voters (using the drop boxes) that someone might be watching.”

The news release did not specify whether they should only be open on weekdays, but noted that last fall, four of the five were available for use during business hours while the Lehigh County Government Center drop box in downtown Allentown “was open 24/7.”

Martin’s statements come in the wake of an investigation his office recently conducted into alleged drop box violations that occurred during the general election last fall. WLVR reported that the investigation began after a complaint from Lehigh County Republican Party Chairman Joseph Vichot was received by the DA’s office. Martin is a Republican.

According to a report on the results of the investigation highlighted in Tuesday’s news release by the DA, “at least 288 people were found to have deposited more than one ballot at five area drop boxes between Oct. 18 and election day, Nov. 2, 2021.”

It further noted that Martin’s office has decided not to prosecute any of the few people who were identified dropping off more than one ballot “because the vast majority could not be facially identified beyond a reasonable doubt due to masks and/or video quality.”

To help prevent Election Code violations and apprehend anyone who breaks the law, Martin announced that county detectives will be reviewing video surveillance footage as well as physically monitoring ballot drop boxes during the lead-up to the May 17 election.

“If voters are observed dropping off more than one ballot, they may face prosecution,” the news release noted.

In Tuesday’s news release, Martin concluded by saying that “he hopes that the possibility of (a) penalty being imposed will be a deterrent to violating the Pennsylvania Election Code and hopes that voters will abide by both the letter and the spirit of the law.”

“Please allow for the necessary time if mailing the ballot back to us,” the office advises residents who will be mailing their ballots. “This office has no control over how or when we receive mail from USPS or what happens to your ballot once it leaves our office.”

The five drop boxes that are available to Lehigh County registered voters will open at the beginning Monday, May 2, the county announced in a recent Facebook post in which it reminded residents that they may only drop off their own ballot unless they are a designated agent for someone.