Police in one upper Bucks County community are investigating an unusual hit-and-run accident in which they say several mature trees were heavily damaged.

According to Hilltown Township Police, the accident happened Friday, May 20 at around 6:15 p.m. in the 900 block of Diamond Street, just south of Sellersville.

That was when a homeowner’s outdoor security system captured video of a black pickup truck appearing out of nowhere and striking several large arborvitae on their property.

In the video, the driver of the truck appears to crash into the trees as he or she is turning into a driveway. Prior to that, police said the vehicle was southbound on Diamond Street.

“The driver made no attempt to notify the property owner of the obvious damage to the trees, which will require them to be removed,” police said in their post on Crimewatch.

After striking them, they said “the vehicle left the scene and continued south on Diamond Street towards Orchard Road.” 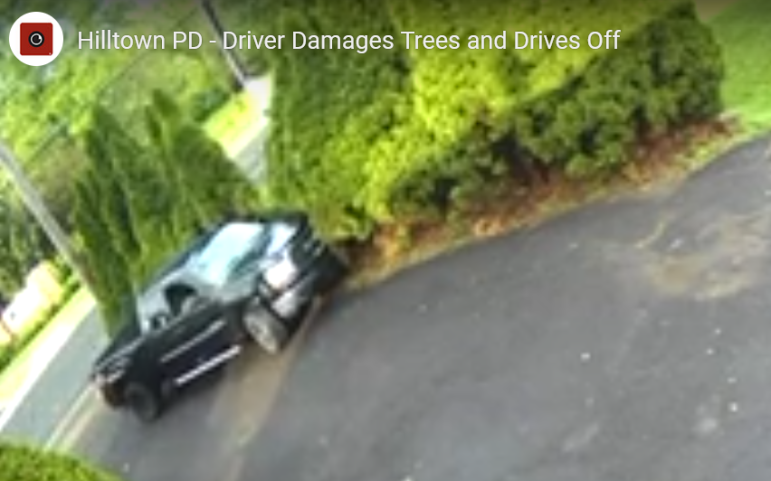 Are they a tree or a shrub? To one arborvitae owner in upper Bucks County, that question is likely of little importance after an unknown individual damaged several of their arborvitae by driving right into them. Hilltown Township Police are now asking for the public’s help identifying the driver responsible for the remarkably quiet hit-and-run crash.

Police did not offer an estimated value for the damaged trees or the cost of their removal, but individual arborvitae in the 12 to 13 foot range can retail for hundreds of dollars.

Anyone with information regarding the owner and/or the driver of the vehicle that struck the arborvitae is being asked to contact Ofc. James T. Browne of the Hilltown Township Police Department at jbrowne@hilltownpd.org, or to submit a tip via Crimewatch. Tips may be submitted anonymously.