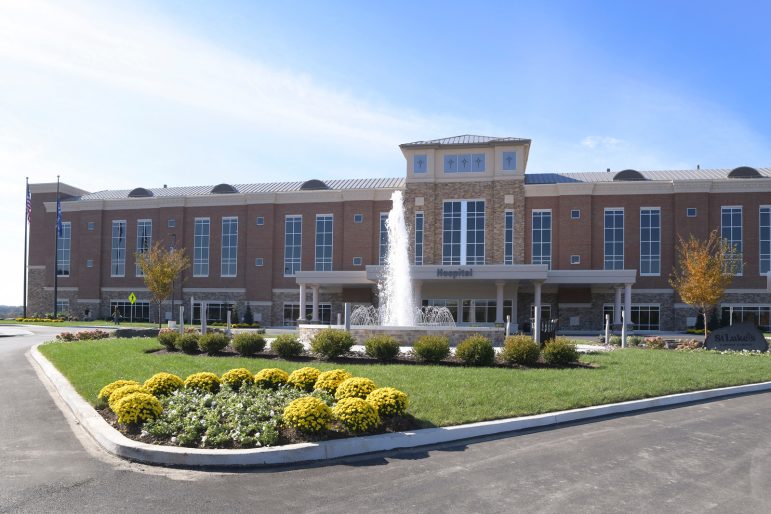 When Christine LeClair, Director of Veterans Affairs for Carbon County, had a doctor’s appointment at St. Luke’s University Health Network’s new Carbon Campus, she couldn’t help but notice how many veterans she passed in the hallways. “I could tell they were veterans by their hats and other gear,” LeClair recalled.

Late last year, LeClair’s office had partnered with the Pennsylvania Department of Military and Veterans Affairs (DMVA) to launch a program, Together With Veterans, to reduce the high number of veteran suicides in the area. Carbon County, home to a large number of Pennsylvania’s veterans, has the highest suicide rate among veterans in the state, according to data provided by the Center for Rural Pennsylvania.

Seeing so many veterans at St. Luke’s Carbon Campus gave LeClair an idea: Could her office set up a booth at the hospital once a month where it could provide information on Together With Veterans and other programs they can access? “Our office is in the heart of Jim Thorpe,” LeClair said, “and with traffic and parking, it’s not that easy or convenient for many of our veterans to get to us there.”

LeClair took her idea to John Nespoli, President of St. Luke’s Lehighton and Carbon campuses. “He did me one better and offered us office space,” LeClair said.

In addition, a walk-in psychiatric center at the Lehighton campus will operate 24/7, 365 days a year and serve anyone 14 years or older in need of mental health services.

“If the psychiatric center finds out the person is a veteran, they will be able to make referrals to Veterans Affairs and bring them over,” said Jennie Serfass, manager of the behavioral health services and rural residency program for St. Luke’s University Health Network.

In addition to receiving information and referrals, veterans also will be able to meet with an accredited Veteran Service Officer to file claims for local, state and federal veteran benefits at the St. Luke’s site.

The office at St. Luke’s Carbon campus will be dedicated in memory of combat veteran Chad Peyton, a friend with whom LeClair served who died by suicide on May 17, 2021.

Nespoli said St. Luke’s is very pleased to be able to help address veteran mental health and bolster efforts that take a holistic approach to their care in any way that it can.

“The veterans who served our country deserve the kind of care and attention that we at St. Luke’s are happy to help foster,” he said.

St. Luke’s also is partnering with the Veterans Center to fill a book cart at its Lehighton Campus that veterans and their families can use. The cart will feature popular children’s titles as well as a wide array of stories that talk about military service, deployments and more difficult topics such as post-traumatic stress.

“My hope is that veterans who come to the Veterans Center at the hospital will bring their children and grandchildren with them and allow them to select a book from the cart to read either at home or while they are being assisted at the center,” LeClair said.

Together With Veterans community-based

Together With Veterans is a community-based suicide prevention program that partners rural veterans and community agencies to prevent veteran suicide in their communities.

The key elements of the plan are identifying service members, veterans and family members and screening for suicide risk; promoting connectedness and improving care transitions; and reducing access to lethal suicide methods and enhancing safety planning.

“Carbon County Veterans Affairs is fortunate to partner with DMVA and St. Luke’s to empower community members, local leaders, organizations, family and friends to take action against veteran suicide,” LeClair said. “Our partnership plans to equip our community with the tools and resources it needs to connect veterans who are experiencing emotional or mental health issues with lifesaving support. We are committed to our veterans and it is our hope that the TWV model will help to lessen the stigma that is associated with suicide and prevent another tragic death.”