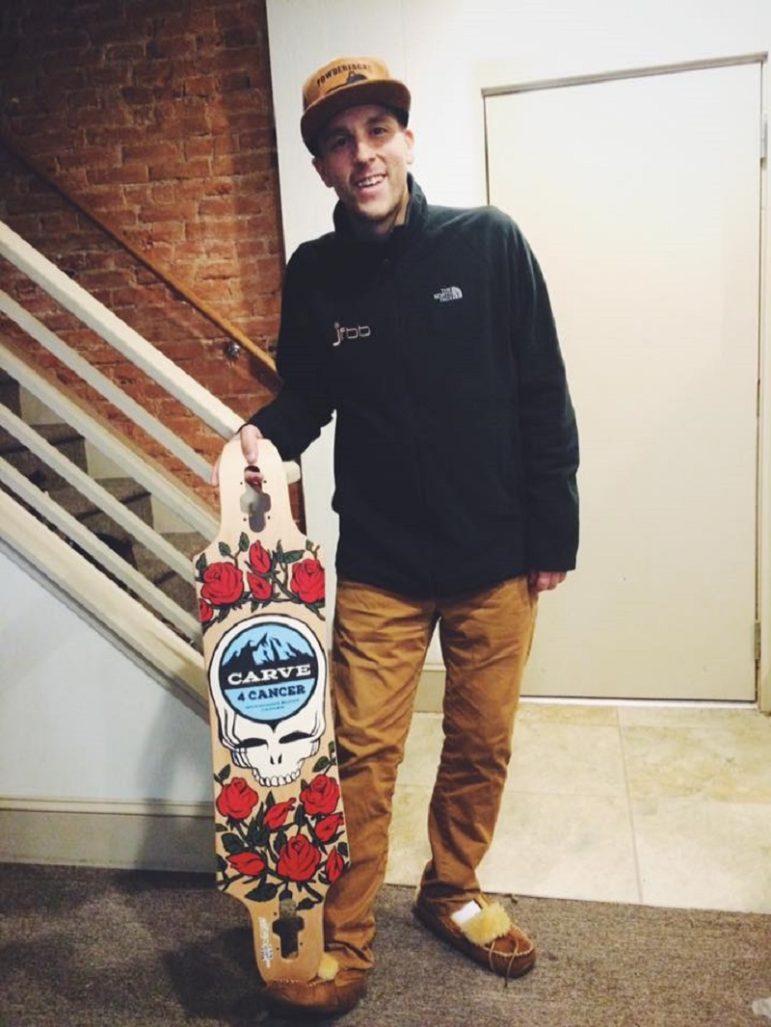 The legacy of Brent P. Evans, a well-known East Coast snowboarder who was diagnosed with a rare type of stage IV non-Hodgkin’s lymphoma in 2010 and later died from the disease, lives on through the work of the Carve 4 Cancer organization he founded. (Contributed photo)

Every three minutes, one person in the U.S. is diagnosed with a blood cancer, according to the National Foundation for Cancer Research. And every nine minutes, someone in the U.S. dies from it.

Decades of research have resulted in significantly improved outcomes for those diagnosed with cancers that affect the blood, bone marrow and lymphatic systems. These cancers account for roughly 10 percent of all diagnosed cancers in this country, which translates into 1.3 million Americans who are either living with a blood cancer or are in remission today.

One of those individuals was Brent P. Evans, a Wilkes-Barre native and well-known East Coast snowboarder who was diagnosed with a rare type of stage IV non-Hodgkin’s lymphoma in 2010. While battling the disease, he started a grassroots organization called Carve 4 Cancer. Its inaugural event to raise funds and awareness about blood cancers was a snowboard and ski event held in the Poconos.

The relationship between St. Luke’s University Health Network and the nonprofit began when leaders of Carve 4 Cancer reached out to SLUHN to discuss ways to collaborate on the winter fundraiser.

“It says a lot about St. Luke’s that they agreed to get behind us from day one,” said Josh Frank, who was a close friend of Evans and now volunteers (along with other staff) with the Carve 4 Cancer organization. “St. Luke’s didn’t know us and we didn’t know them, but we took a chance at working together. And we’ve been collaborating ever since.”

Brent was in remission for several years, but succumbed to the disease in 2017 at the age of 33. Still, his passion for life and his desire to help others lives on in the Carve 4 Cancer nonprofit he started, as well as the Live Like Brent Foundation (LLBF) that was established by his friends in his memory, which seeks to alleviate some of the financial burden cancer treatment can impose on patients.

Among those who continue to benefit from this group’s fundraising efforts are those battling blood cancer at St. Luke’s Cancer Center. A fund was established in support of blood cancer patients in 2018, after Carve 4 Cancer donated $10,000 to St. Luke’s Cancer Center. Since then, the organization has donated nearly $65,000 to the fund and has helped numerous cancer patients at various St. Luke’s locations in Pennsylvania and New Jersey. Last year, St. Luke’s treated more than 4,000 cancer patients, many of whom struggle financially and would not otherwise have been able to meet the cost of their chemotherapy, radiation or other treatments and medications.

“When you’re battling blood cancer, or any kind of cancer, your main objective is to get better and heal,” said Stephanie Schweder-Kratzer, director of development at St. Luke’s University Health Network. “You shouldn’t have to worry about paying your rent or medical bills beyond your insurance. These funds help with those expenses so the patient can focus on fighting their cancer.”

“The Carve 4 Cancer organization has always been tremendously supportive of those fighting this form of cancer, but this year, they have really gone over and above with their level of support,” she added. “It’s been a huge help to St. Luke’s in caring for its blood cancer patients.”

The blood cancer funds are disbursed by qualified social workers and support staff at St. Luke’s Cancer Center. Jesse Keiper, the manager for Oncology Financial Services for St. Luke’s, works with patients who need financial support. She explained that by removing the barriers to the high financial cost of treatments they need, patients have at least part of their burden lifted during an already stressful time.

“Patients often express how grateful they are, how blessed they feel that they can get this help,” Keiper said. “When they learn how much the medications they need could cost, many become tearful and say, ‘I will die because I can’t afford this.’ But when we tell them there is help, they feel a sense of hope. It’s very gratifying to be able to help them this way.”

Frank is certain his friend Brent would approve of how these funds are being used.

“Part of what we were trying to accomplish was to find ways to help people with blood cancer fill the financial gap while they are battling their disease,” Frank said. “I know everyone who is a part of the Carve 4 Cancer organization is grateful for the opportunity to carry on Brent’s legacy. With every decision we make, we ask, ‘What would Brent do?’ Losing him was one of the most difficult things any of us have experienced, but we use that pain and loss to make sure no one forgets about him and to continue the work we know he would have done if he were still alive.”

For more information on Carve 4 Cancer and the Live Like Brent Foundation, visit Carve4Cancer.com. For information on St. Luke’s Cancer Center, visit Slhn.org/cancer.