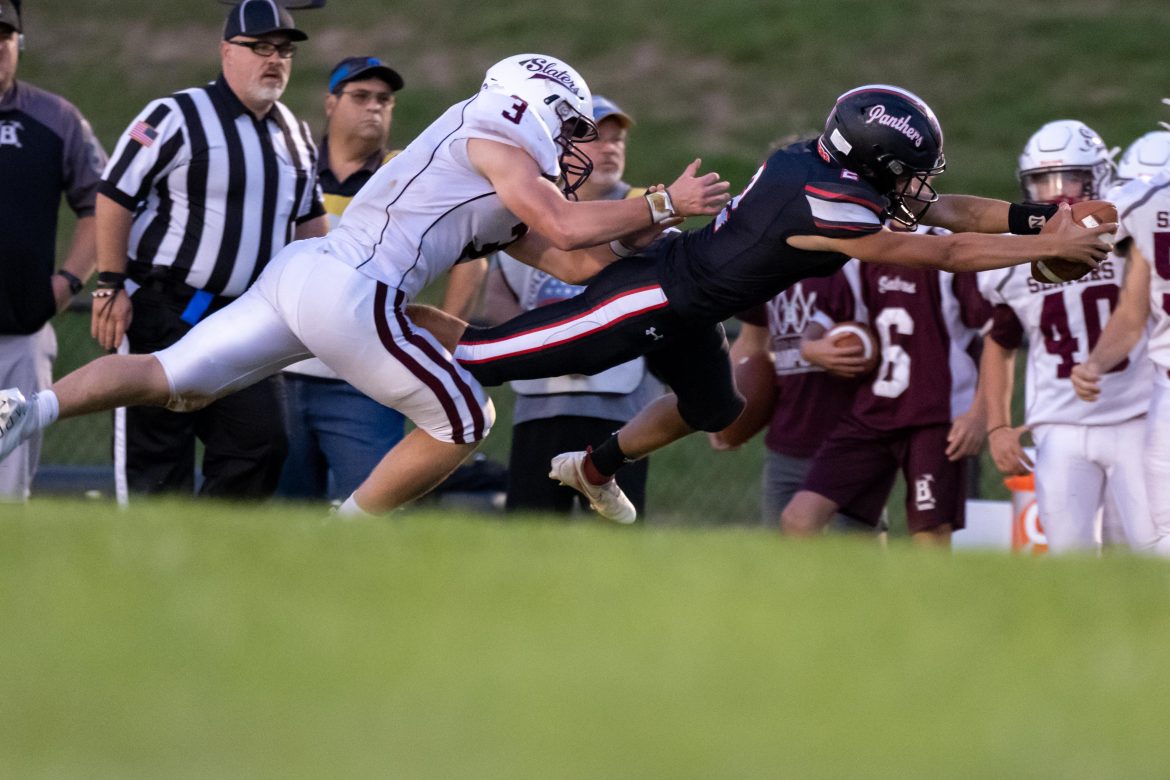 Saucon senior quarterback Travis Riefenstahl extends to pick up a first down against the Bangor Slaters.

It has been said for a thousand years that “familiarity breeds contempt”.  So was the case at Montford E. Illick Stadium on Friday night when the Banger Slaters lined up across the Saucon Valley Panthers for a battle between two teams with 2-1 records.  Last season these two teams played each other twice.  The first meeting ended with a 36-22 Panther victory.  The Slaters had their way with the wounded Panthers in the rematch at the Eastern Conference finals, 49-13.  Nonetheless, the stage was set in this new season for a much-anticipated clash between two teams with a rich history that would have huge significance in the Colonial League and District XI standings.

Saucon Valley received the opening kickoff to start the first quarter from their own 25-yardline.  The Panthers pieced together an impressive drive that was balanced between pass and run.  Even more impressive was that the Panther offense was able to overcome 1st & 20 and 2nd & 30 situations due to a couple of holding penalties.  Highlighted by big runs from Travis Riefenstahl and Josh Torres along with a 32-yard catch and run by Jared Rohn, Saucon found themselves deep in Slater territory sniffing the goalline.  Finally, after twelve plays, Riefenstahl followed a platoon of determined Panther blockers to his left and punched the ball in for a 1-yard touchdown run.  Braeden Schriffert’s extra-point was good and with 6:42 remaining in the opening period Saucon drew first blood with a 7-0 lead. 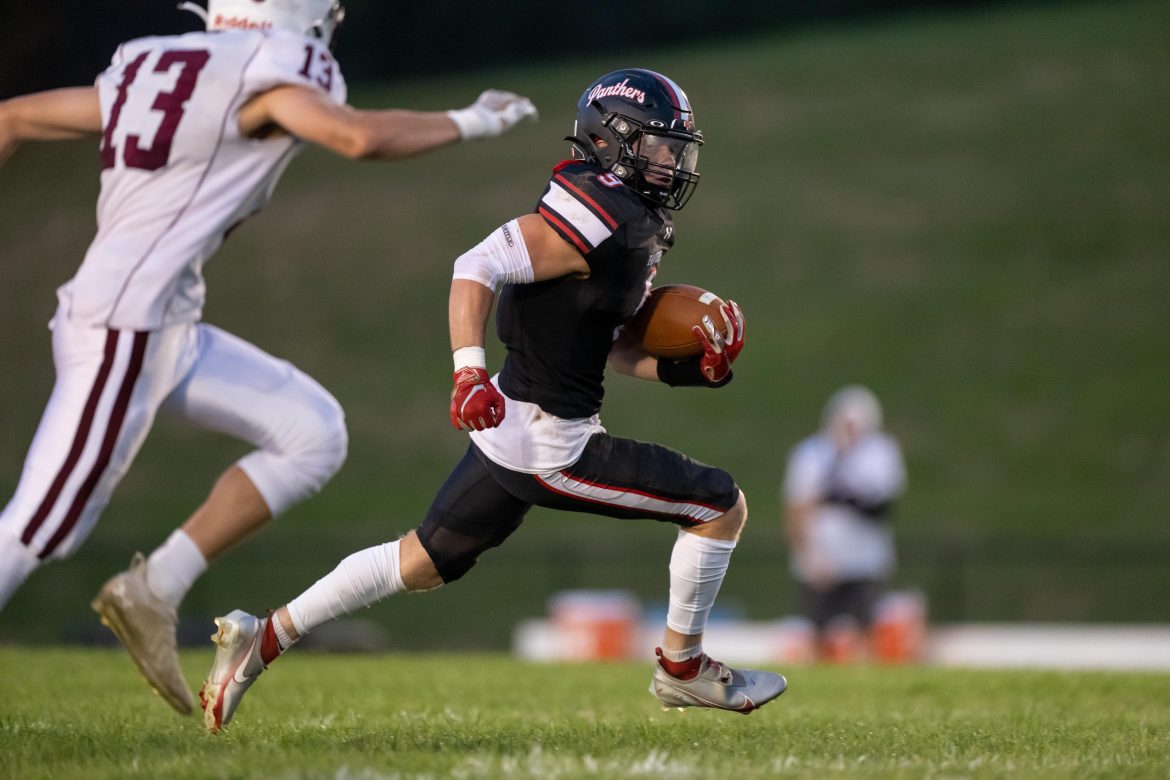 Saucon Valley’s Jared Rohn picking up yardage during the opening drive against the Bangor Slaters.

Bangor’s response wasn’t immediate, but it was methodical.  The Slaters passed once picking up a first down, but preferred to pound the ball the other nine times during their 65-yard scoring drive. Senior quarterback Eric Striba (6’1″, 190) and classmate Ashton Kluska (6’0″, 195) did the heavy lifting.  It was Striba, however who took the plunge from three yards out when he powered his way into the Panther end zone.  The PAT missed wide-left and with a few seconds left in the first quarter the Panthers led 7-6. 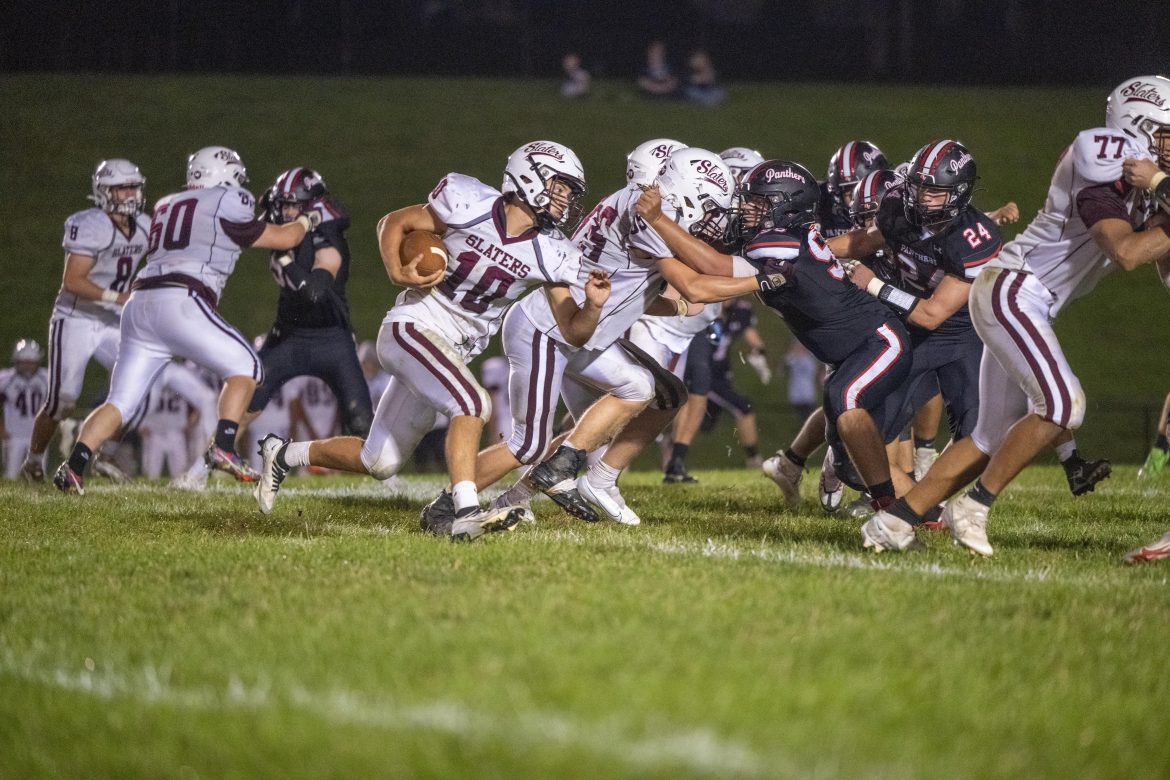 Slater senior Eric Striba (#10) on his way to a three touchdown night for Bangor.

The Slater offense did not have to wait long to continue their craft.  Saucon Valley fumbled away the ensuing kickoff gifting the Slaters field position at the Panther 37-yardline.  Two plays later Striba went play-action and hit tight end Riley Stapp for a 38-yard touchdown pass.  Stapp split the Panther safeties and rumbled the rest of the way for six points.  Striba completed a quick out to Greg Campbell to make good on their 2-point PAT.  In the opening moments of the second quarter the Slaters took a 14-6 lead over the Panthers.

Saucon Valley seemed to have the answer as they moved the ball from their own 27-yardline into Bangor territory at the 30.  However, on 1st & 10 from the Bangor 30-yardline the Panthers called “all-hitch” hoping to capitalize on a quick-hitting gain through the air.  However, Riefenstahl’s pass attempt to Jared Rohn was tipped by Bangor’s Jacob Weaver at the line of scrimmage and intercepted by Riley Stapp from his outside linebacker position.  Stapp’s pick at 7:44 led to a Bangor 10-play, six minute drive that ended with a Striba 7-yard touchdown run straight up the gut.  The Slater 2-point PAT  was snuffed out by Shane Kerosetz.  But, with only 1:10 available on the first half clock the Slaters extended their advantage to 20-7. 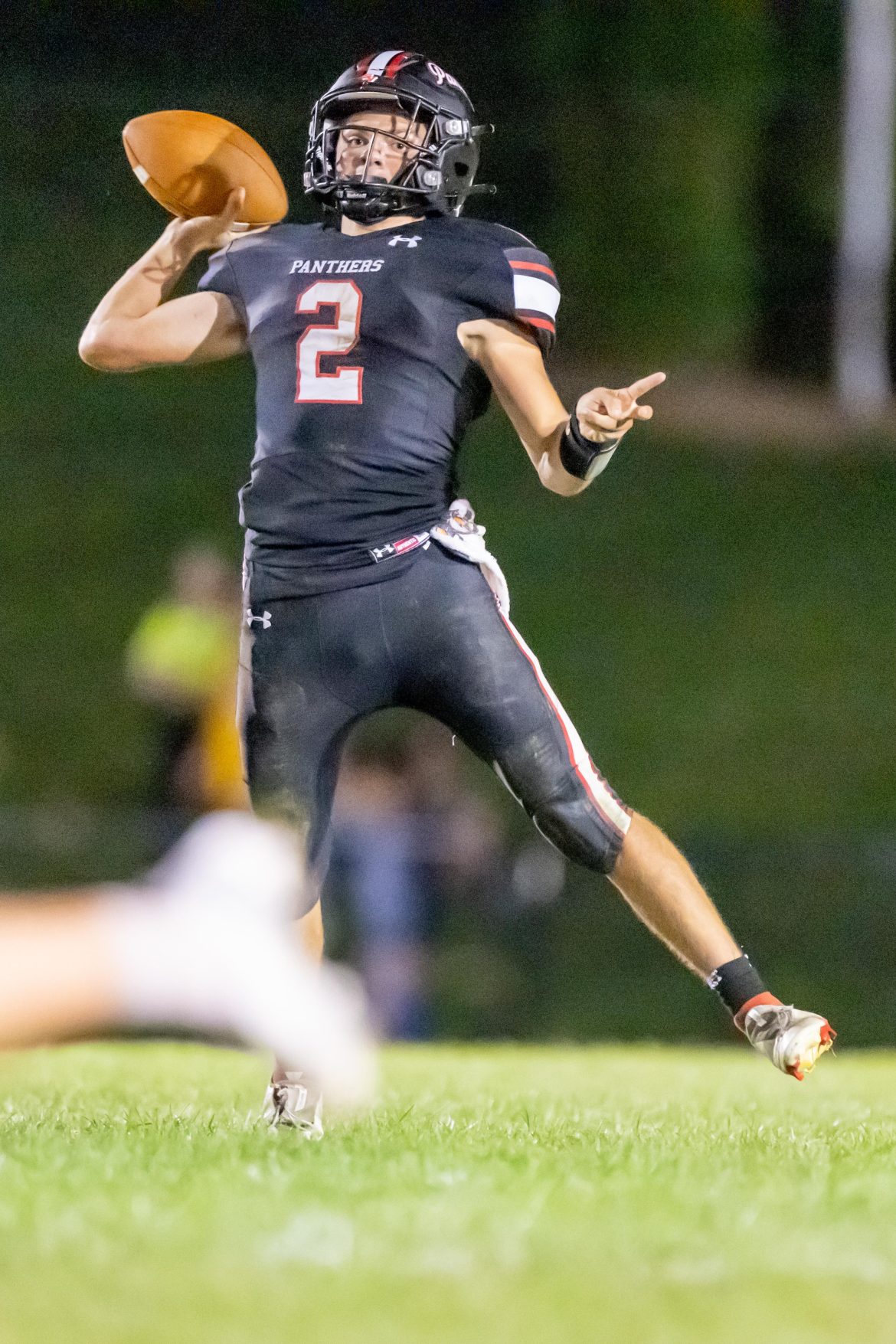 Saucon Valley quarterback Travis Riefenstahl looking for an opportunity against the Bangor Slaters.

With a couple of timeouts and a passing attack that has been pretty potent, the Panthers came back out swinging.  On 1st & 10 from their own 31-yardline, Riefenstahl dropped back to pass and found Jared Rohn  on an out-and up down the Panther sideline.   Rohn’s acrobatic, one-handed catch gave the Panthers life and a first down in Slater territory at the 40-yardline.  The Panther drive appeared to stall, but on 4th & 7 from the Bangor 38-yardline Riefenstahl stepped up in the pocket under a heavy pass rush and dished a short pass to Jack Robertson on a shallow crossing route.  Robertson raced his way out of bounds to the 21-yardline for the first down.  With only two seconds on the clock the Panthers dialed up a fade route to Alex Magnotta.  Magnotta used every bit of his 6’4″ frame and reach to reel in Rief’s pass in the back corner of the end zone.  With Magnotta’s heroics, and Braden Schriffert’s extra-point the Panthers clawed back to a 20-14 deficit. 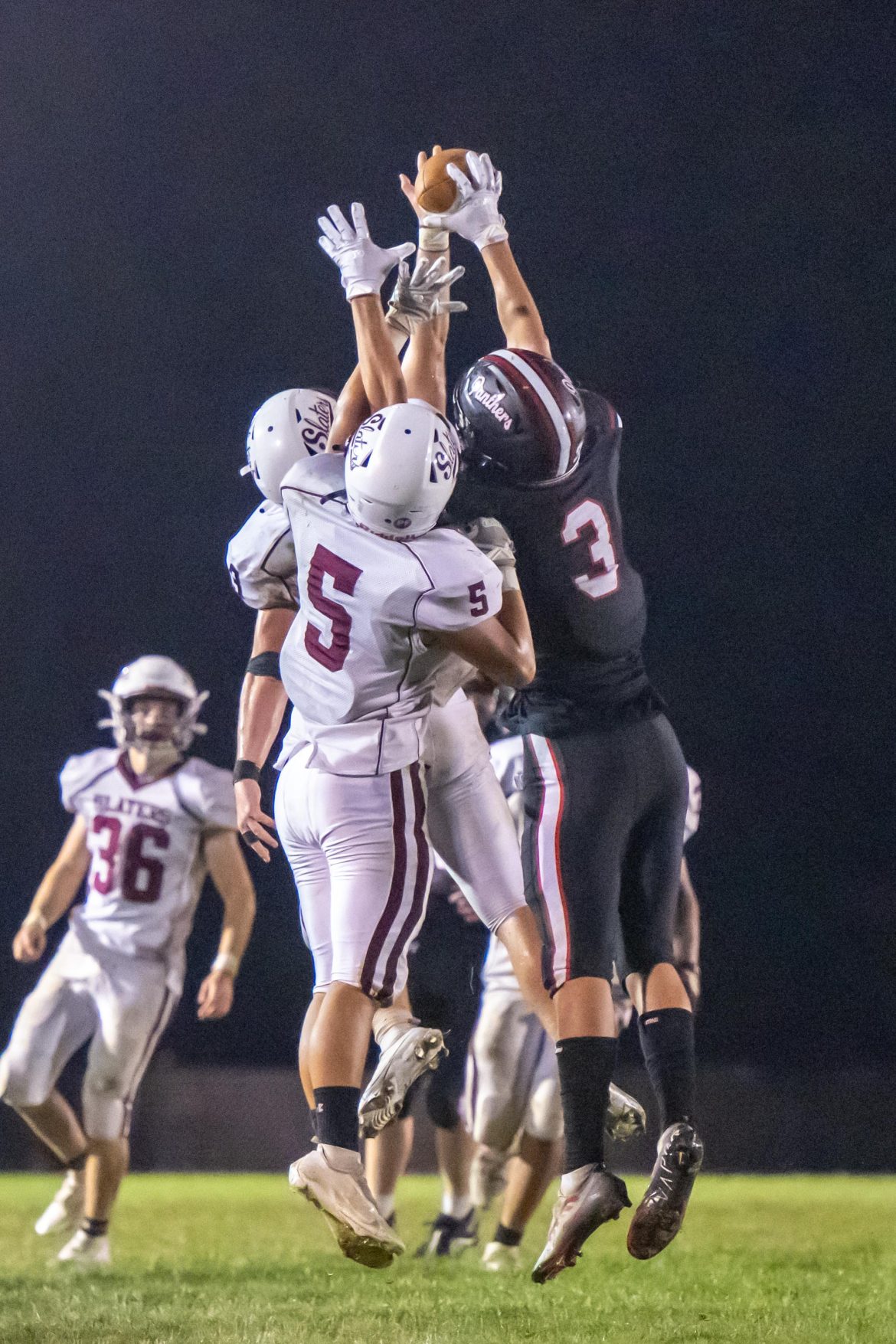 For as much of a boost that Magnotta’s catch had for Saucon, the Panthers still struggled stopping the Slater offense.  Bangor took advantage of very good field position at their own 43-yardline and went to work.  On the fourth play of their series, Ashton Kluska powered and popped a 20-yard run down to the Panther 27-yardline where the Slaters met some stiff Panther resistance.  On 4th & 9 from the 26-yardline Striba rolled right to pass where he hit Tommy Aulisi who made a diving catch for a first down to the Panther 16-yardline. Five plays later the Slaters pounded the center of the Panther defense for a 2-yard TD run by Striba.  The 2-point PAT was smothered by Eli Torres and Ty Pfizenmayer but Bangor claimed a 26-14 lead with just over five minutes remaining in the third quarter. 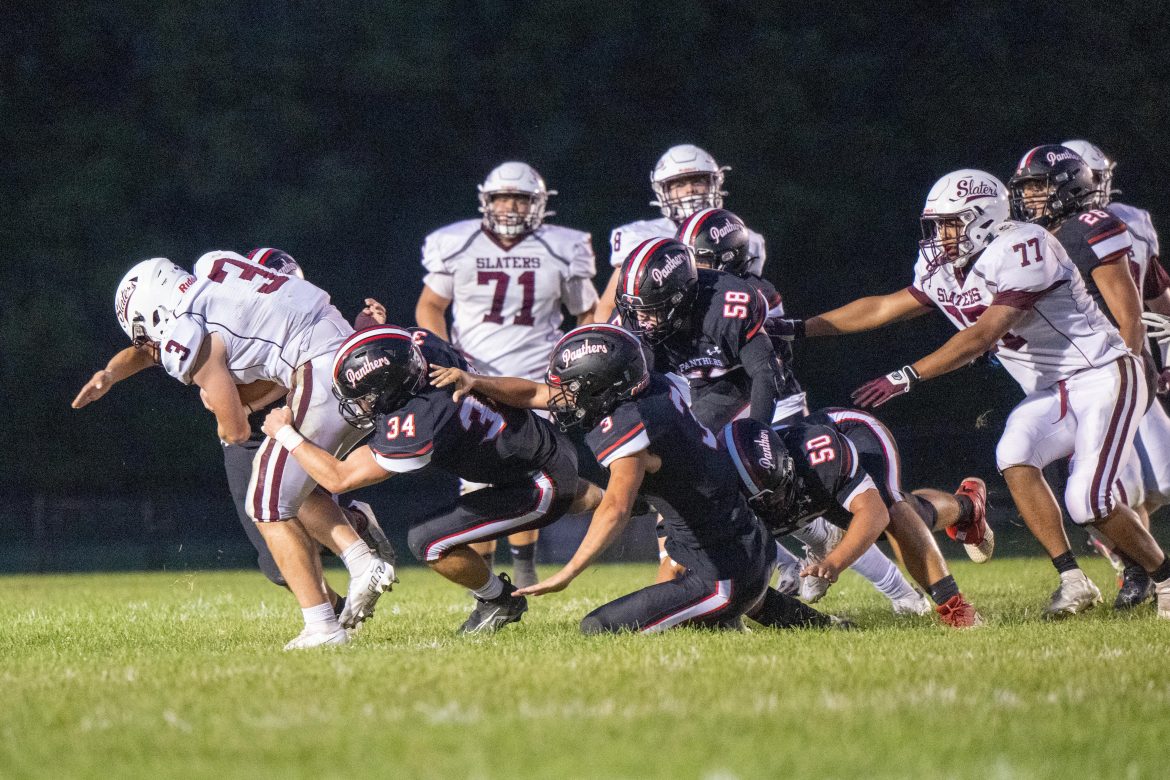 The Panther defense picking up a stop against the Bangor Slaters.

The Panther offense went back to work starting at their own 34-yardline.  Highlighted by runs by Ty Pfizenmayer, Josh Torres and Travis Riefenstahl, Saucon’s 11-play drive beared fruit on 2nd & 6 from the Slater 14-yardline.  Riefenstahl rolled right to pass, but was hemmed in.  He reversed field to escape and was able to skirt the left edge of the Slater defense and run away from the pursuit.  Rief followed the Panther sideline and powered his way into the end zone for the score.  Schriffert’s kick hit the bulls-eye and Saucon trailed 26-21 with the entire fourth quarter left in front of them. 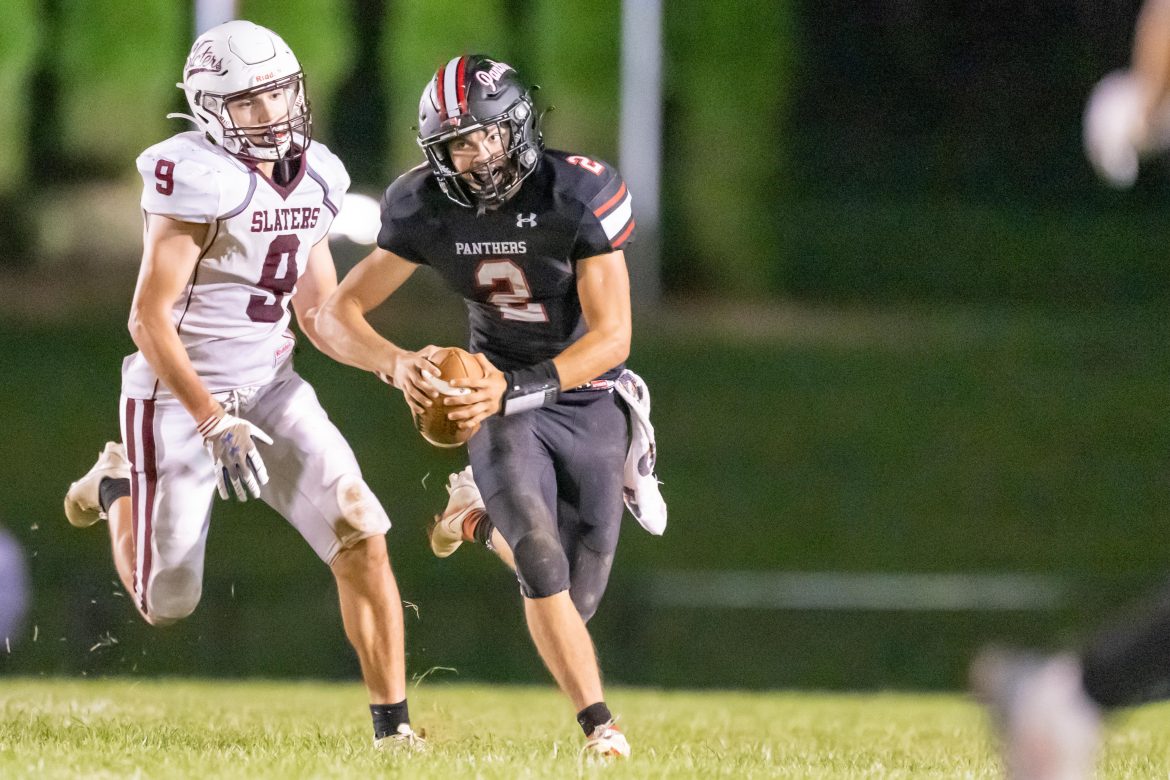 If the Saucon faithful weren’t already encouraged by the Panther comeback, Braden Weiss’s pooch kick surely got them fired up.  On the ensuing kickoff after Rief’s 14-yard score, Weiss clubbed a wedge shot just over the Slater front kickoff return line.  Panther sophomore Shane Kerosetz was able to pounce on the loose ball giving Saucon possession at the Bangor 42-yardline.  However, the Panthers failed to convert on 4th & 5 from the Slater 37-yardline when a Riefenstahl pass completion to Alex Magnotta was ruled out of bounds.

The Panther defense went into bend–but-don’t-break mode but the Slaters were able to seriously flip field position down to Saucon’s 12-yardline.  It was there that Striba’s 4th & 6 swing pass attempt to Riley Stapp fell incomplete.  The Panthers took possession at their own 12-yardline with 4:24 remaining in the game. 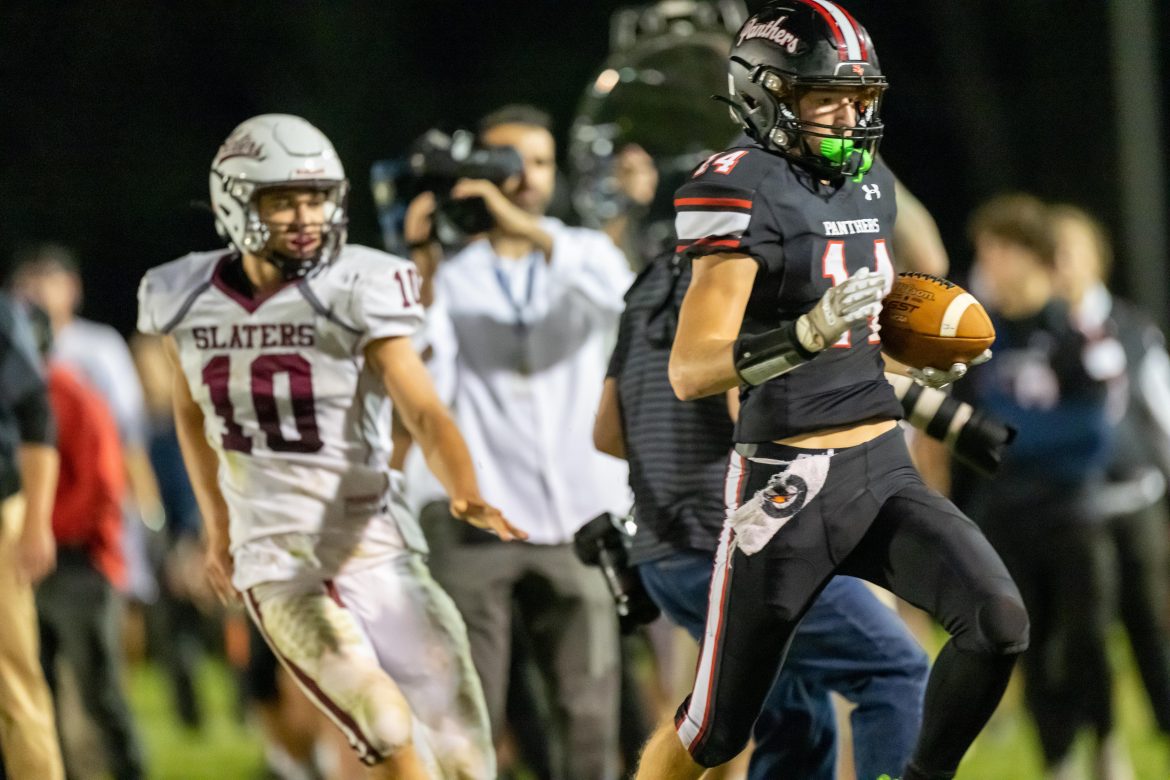 Highlighted by a 35-yard Riefenstahl scramble, completions to Jared Rohn  and Jack Robertson the Panthers crept their way into Slater territory.  Then, on what looked like a designed QB run by Riefenstahl, the Slaters were penalized for a late hit out of bounds which moved the ball to the Slater 21-yardline.  But, following a false-start penalty, a sack and incomplete pass attempt, the Panthers faced 3rd & 22 from the 30-yardline with :25 seconds left to play.  It was there Riefenstahl’s pass attempt to Alex Magnotta was intercepted by Eric Striba at the 3-yardline.  With the Panthers out of time-outs, it was the virtual end of the game.   Bangor held on to hang some heartbreak on the Panthers with 26-21 being the final score.

UP NEXT:  The Panthers (2-2) hit the road for Pottsville for a Friday night football fight with the Crimson (1-3).  Kickoff is scheduled for a 7 p.m. 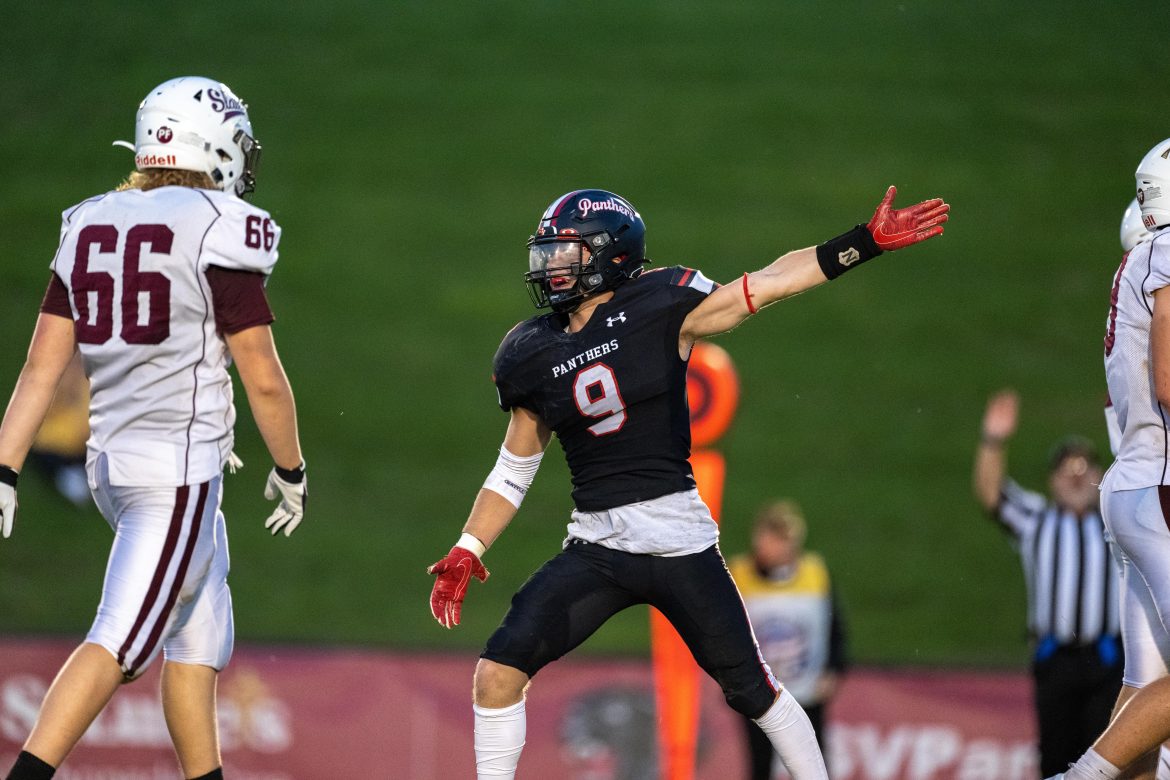 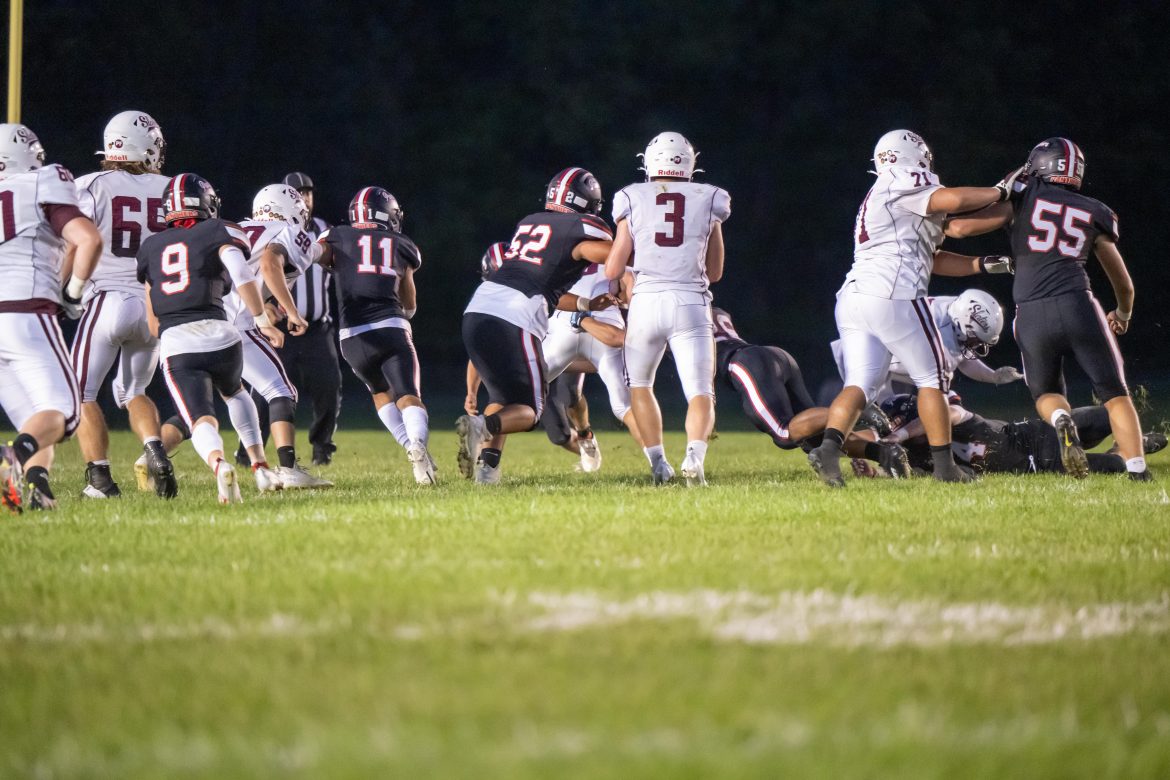 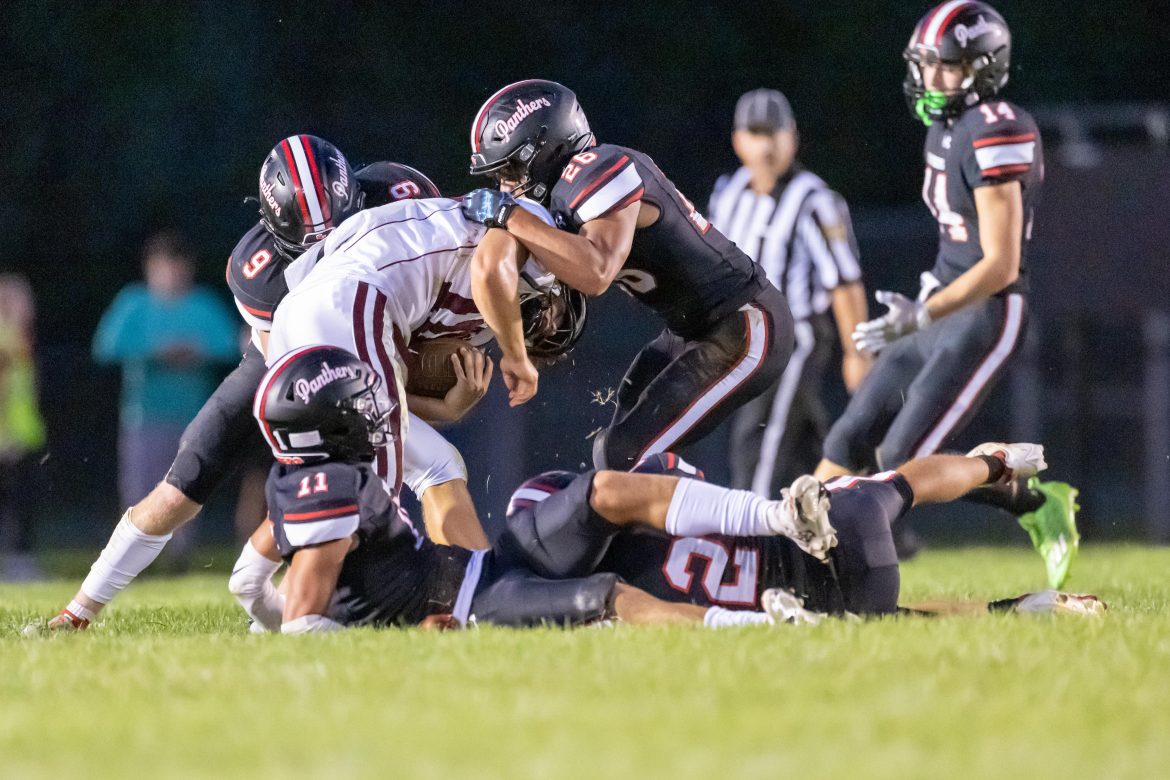 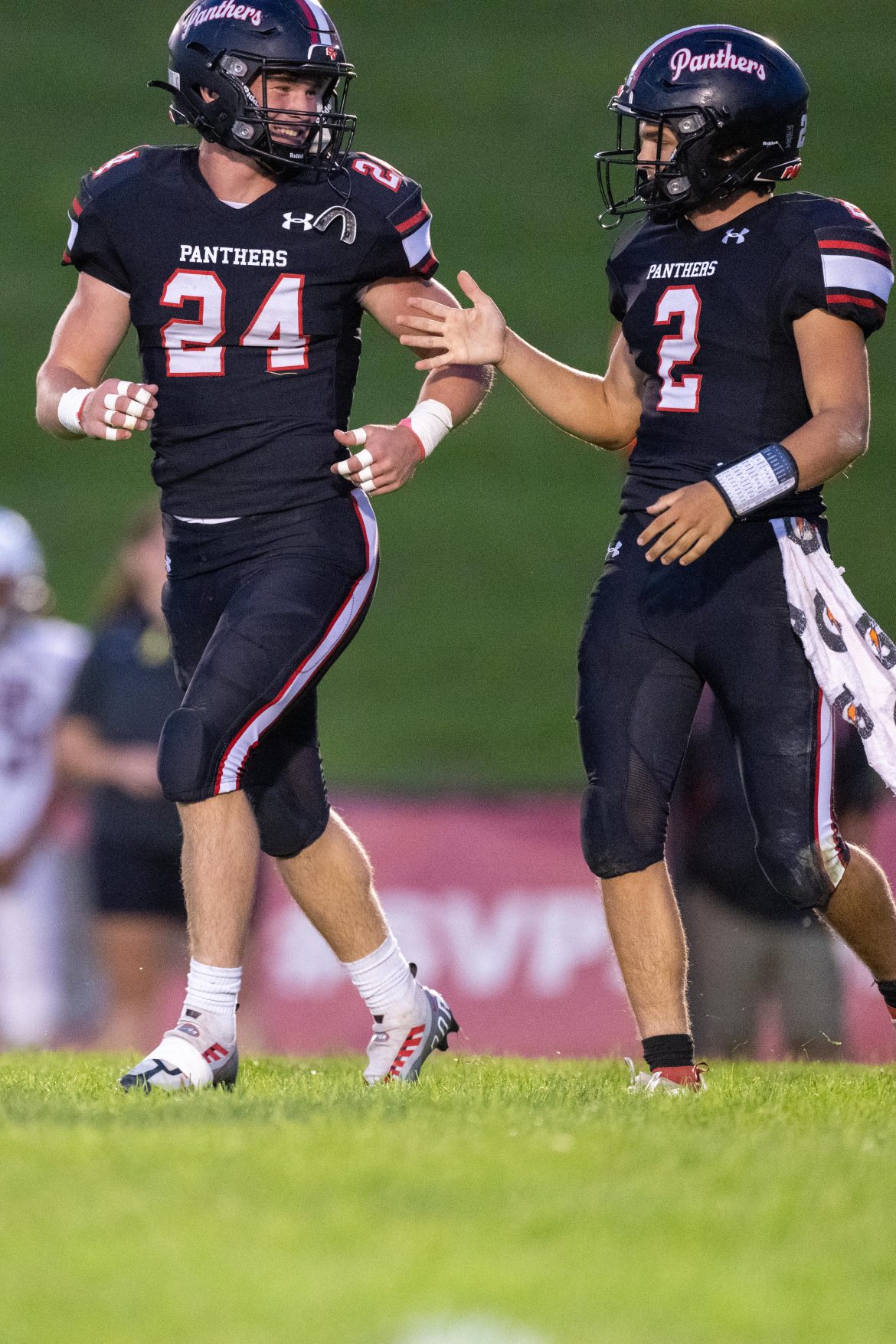 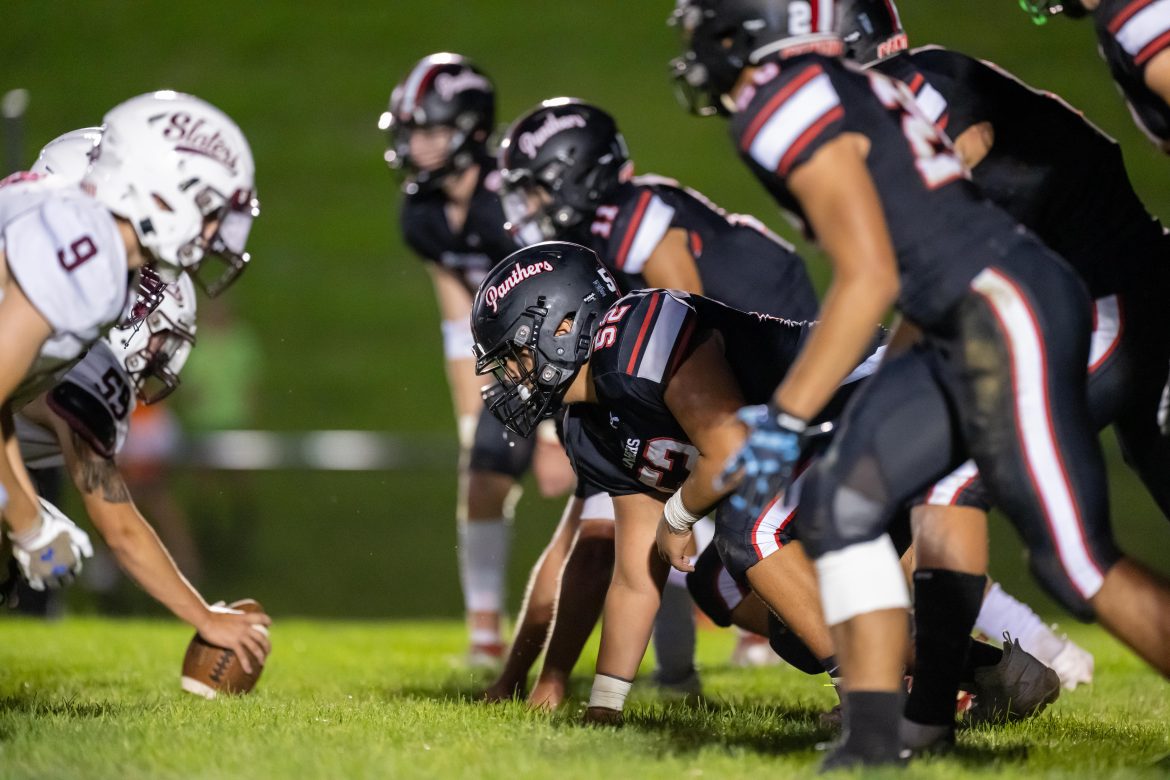 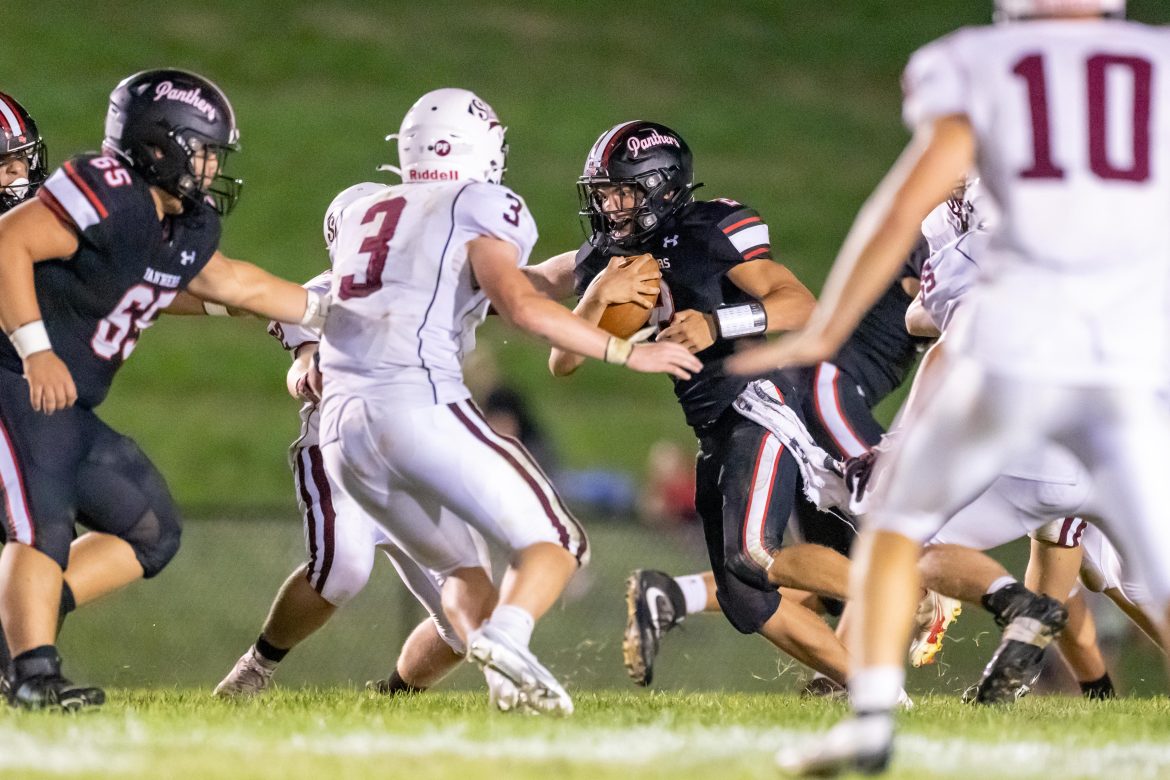 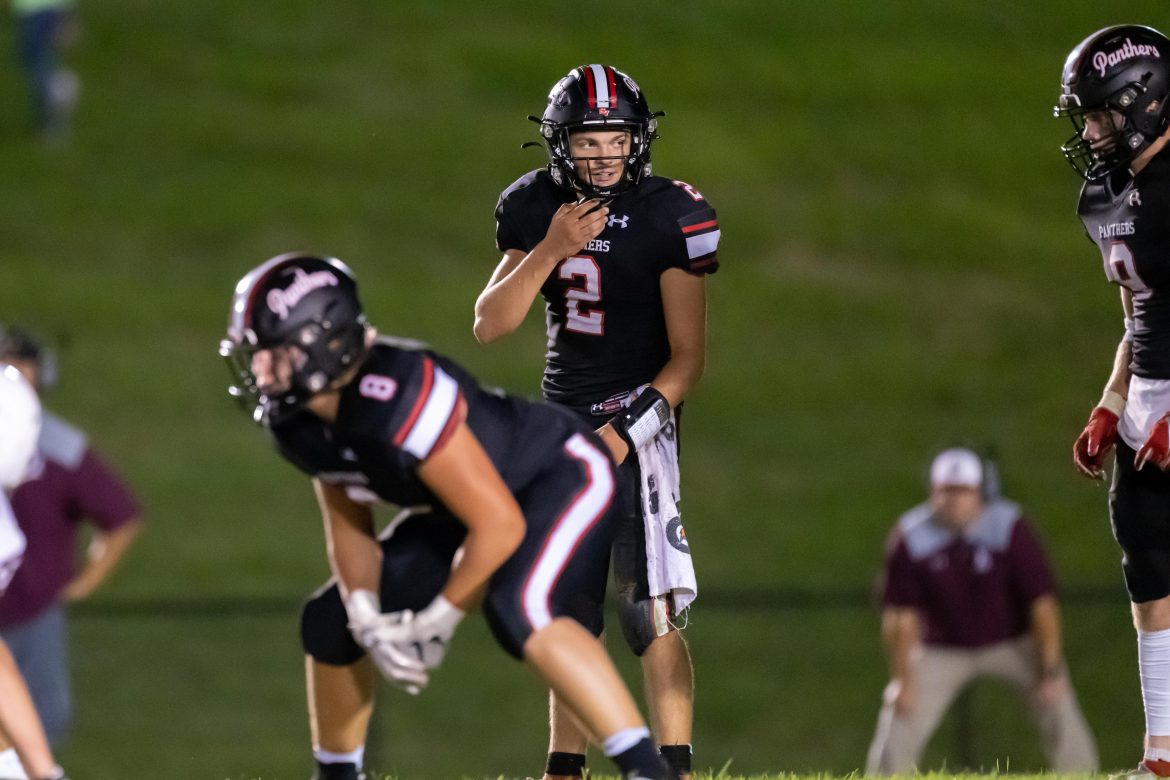 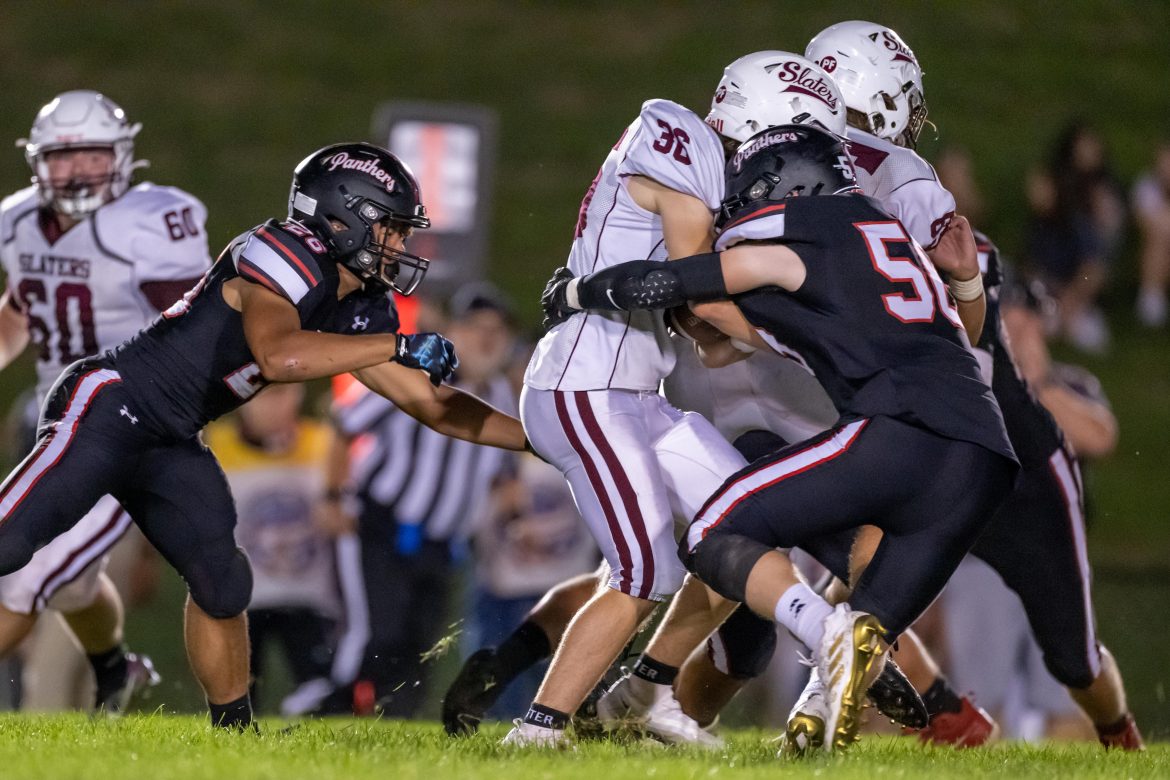 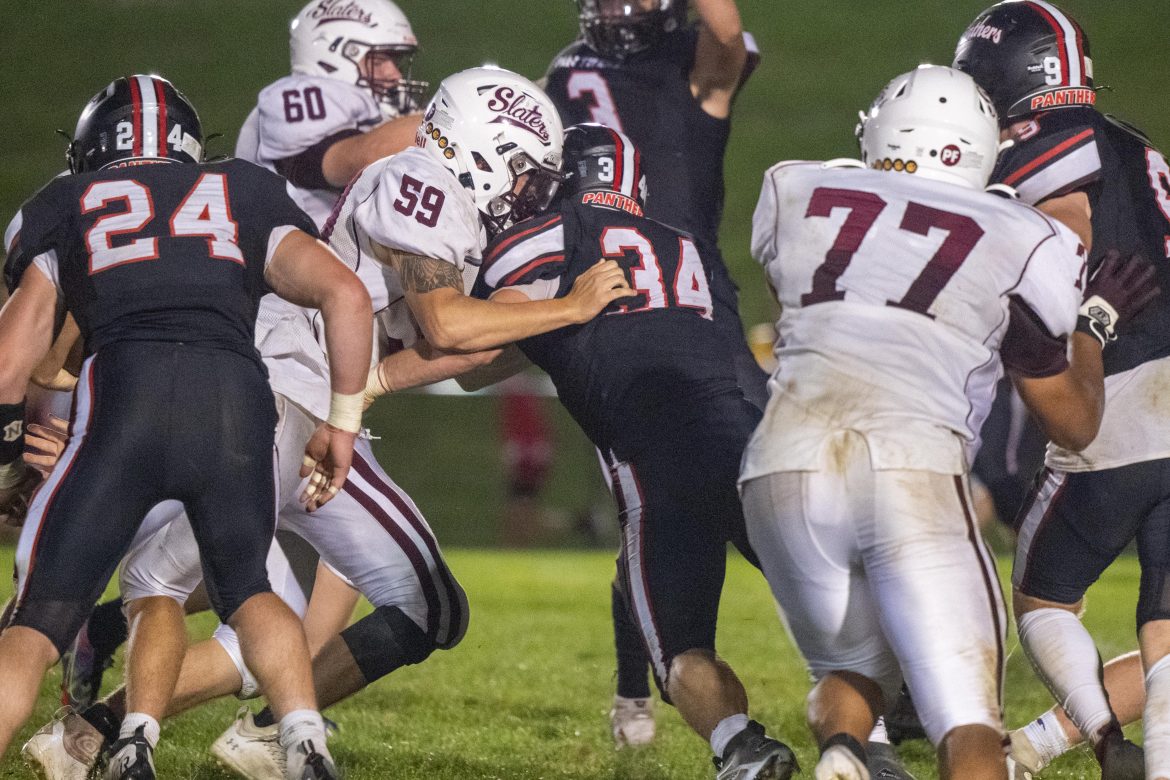 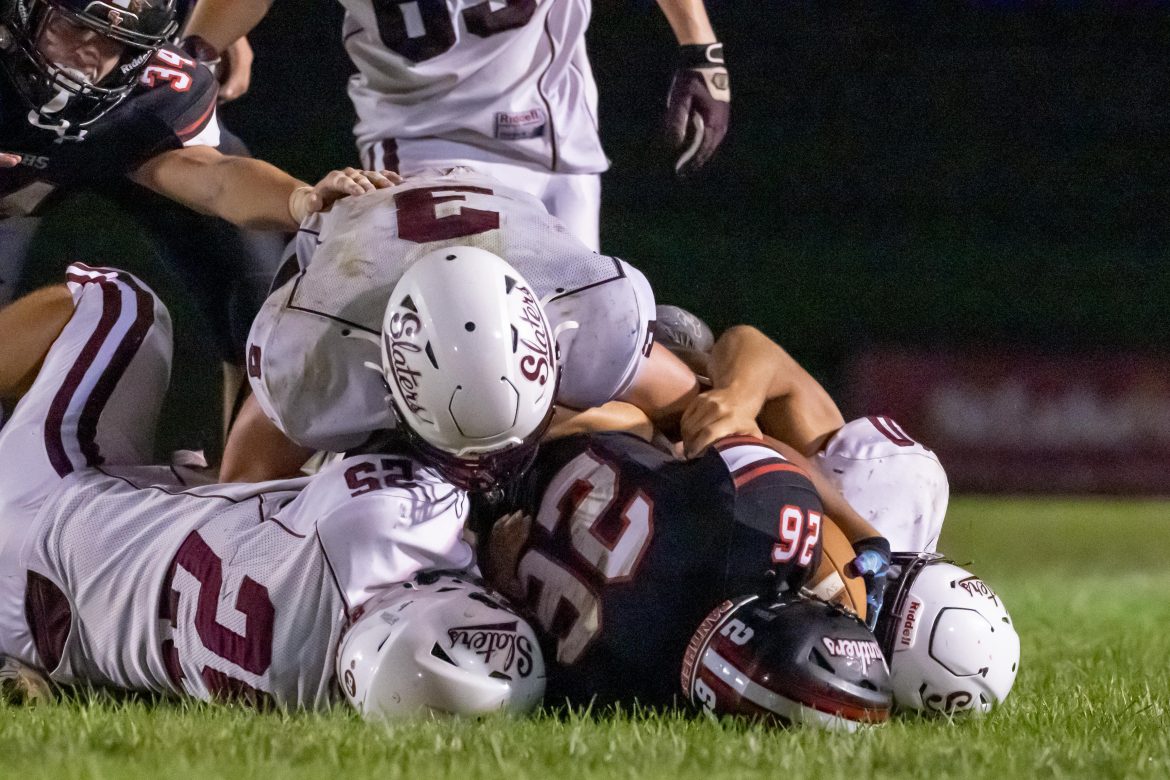 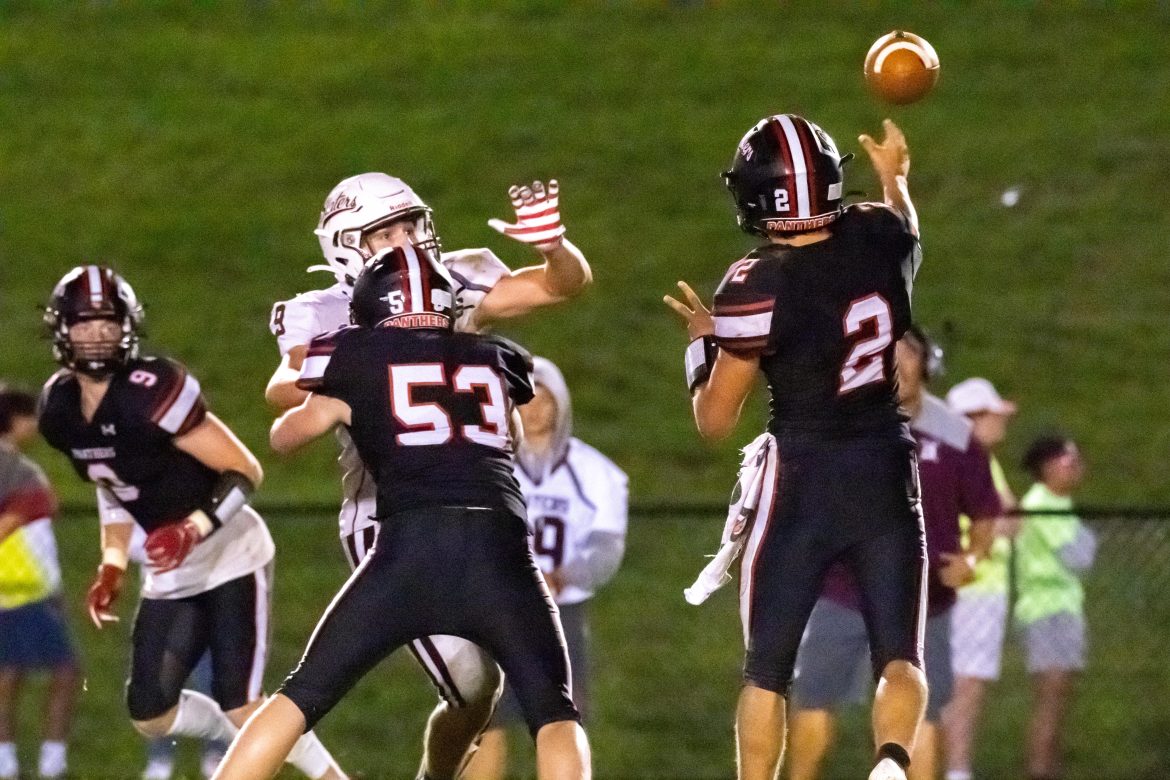 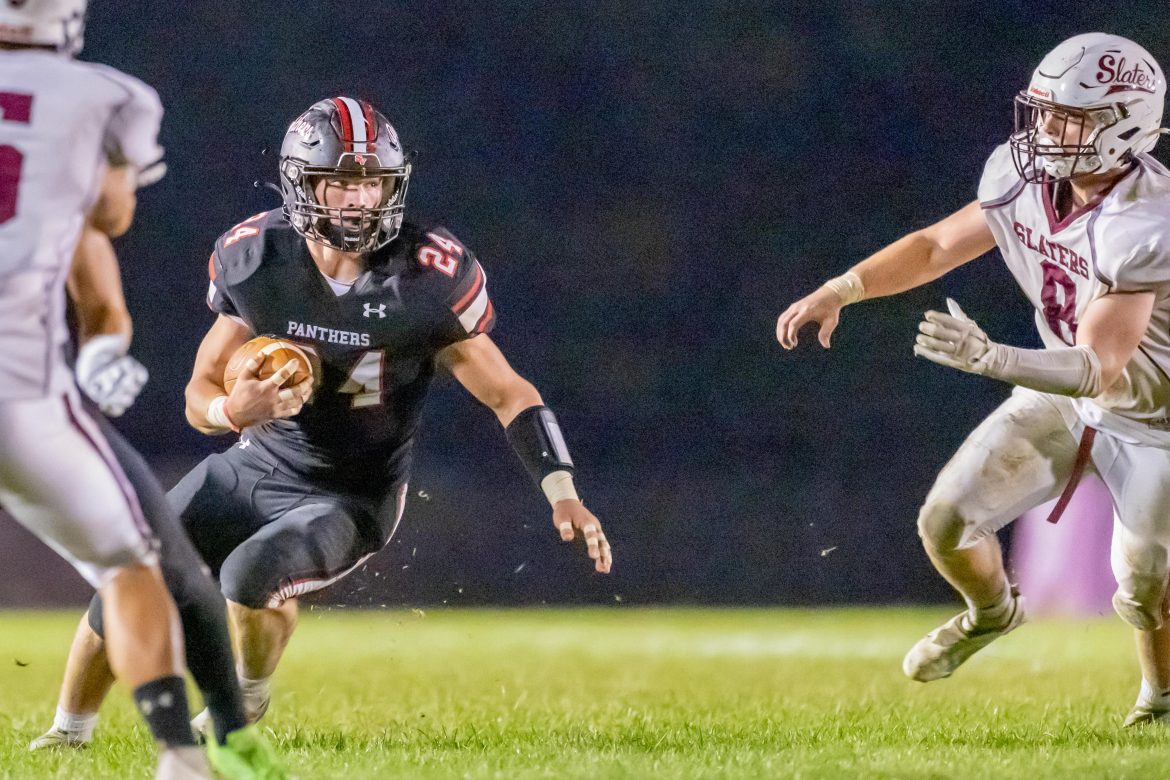 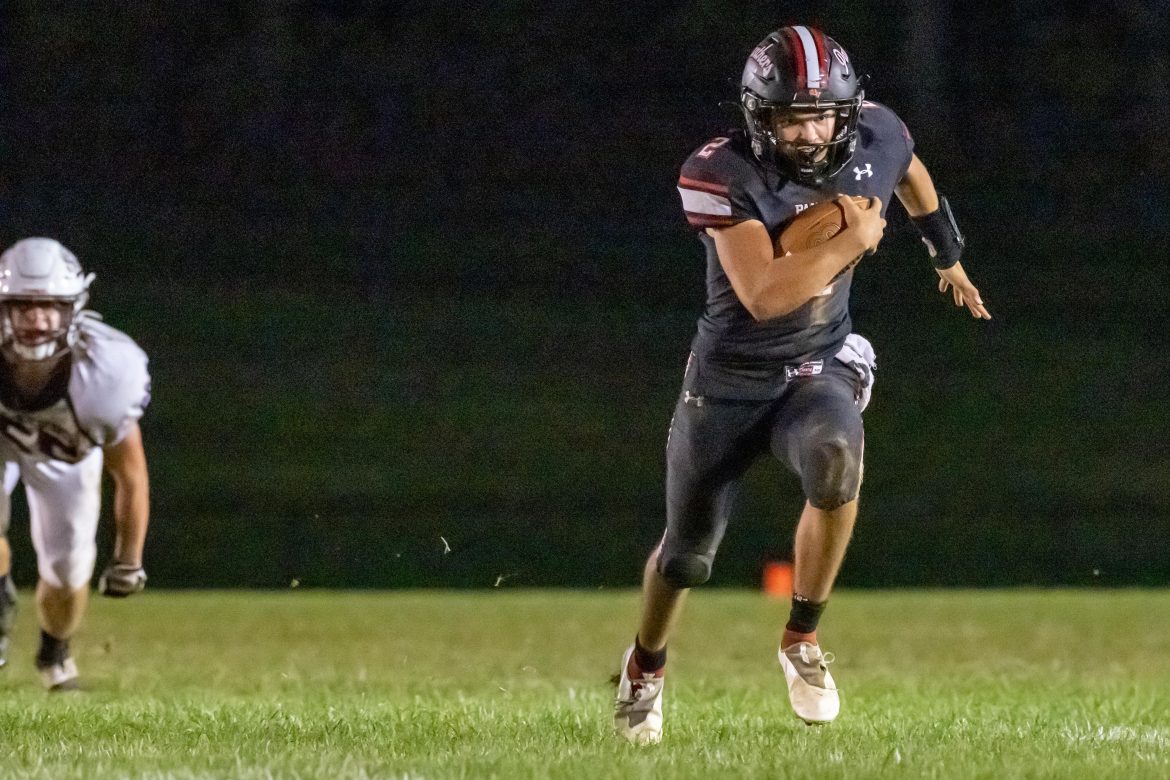 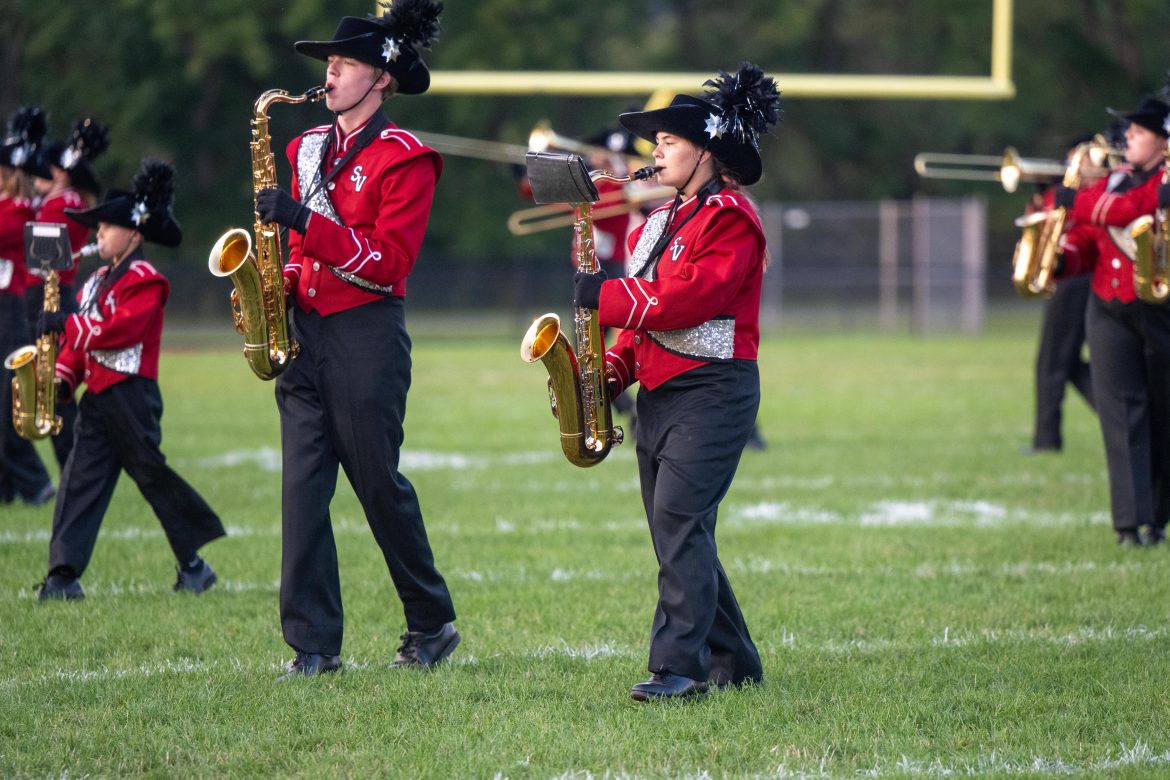 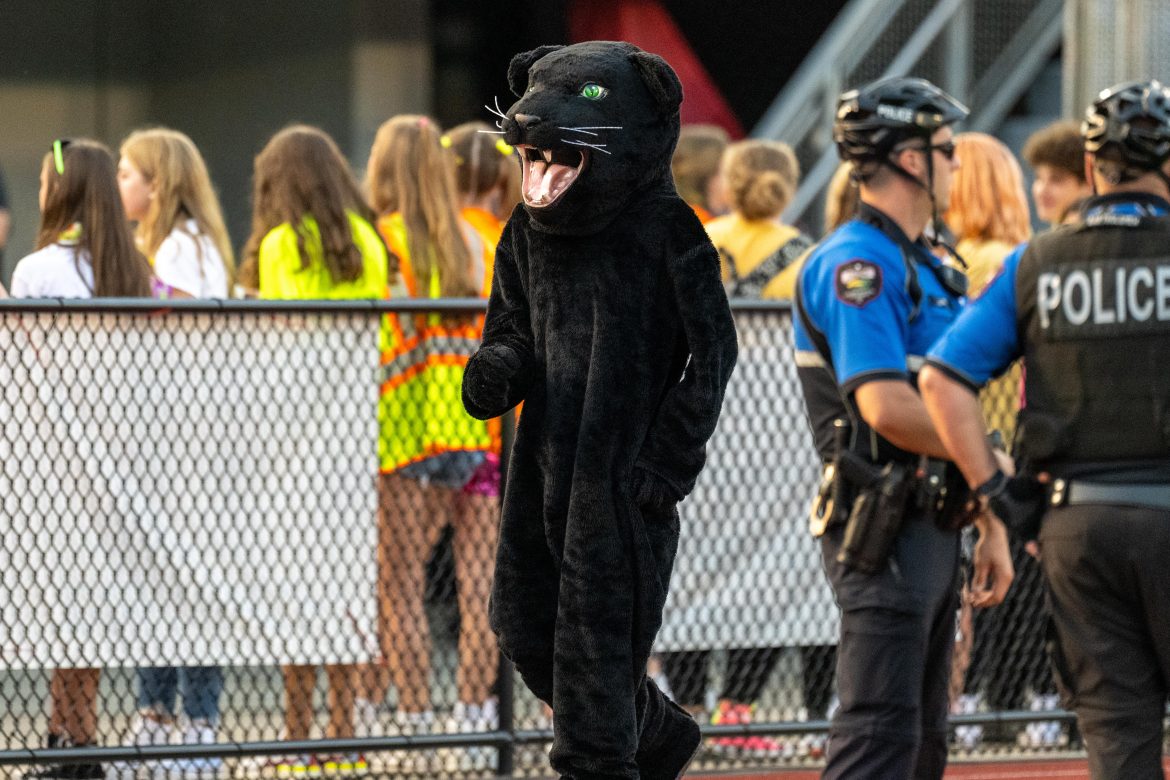