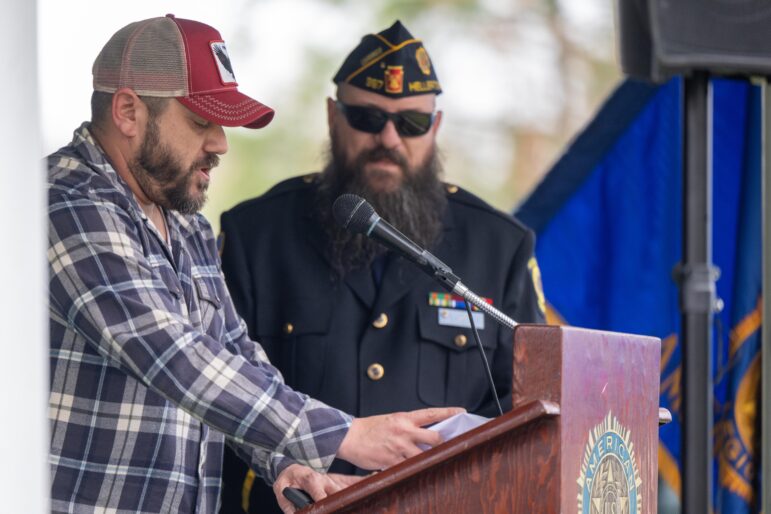 U.S. Marine Corps veteran and Purple Heart recipient Dan Zimpfer speaks at the Hellertown American Legion’s Veterans Day service Friday. Looking on is Legion Post 397 Commander Eric Medei, who said he had been trying to get Zimpfer to speak for seven years. “I really appreciate you coming up here and speaking today,” he told him. (Credit: Chris Christian)

Veterans Day 2022 turned out to be a wet one, but the rain that began falling Friday morning didn’t deter dozens of local residents from gathering at Union Cemetery in Hellertown to recognize the sacrifices made by their hometown heroes.

Eric Medei, Commander of the Edward H. Ackerman American Legion Post 397 in the borough, noted that weather doesn’t stop the military from defending freedom, either.

“They didn’t stop battles because it was raining,” he said.

The mid-morning Veterans Day service hosted by the Legion began with Medei sharing a famous quote by Winston Churchill that pays homage to the men and women who served in World War II, but is also used to pay tribute to veterans of earlier conflicts and those who still serve today: “Never was so much owed by so many to so few.”

Fewer than 175,000 of the 16 million Americans who served in the Armed Forces during World War II are still alive, according to statistics from the National WWII Museum. 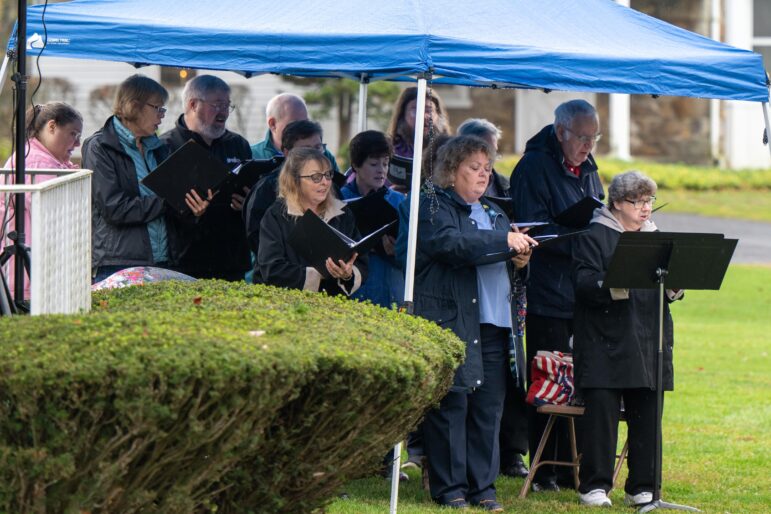 Hellertown Mayor David Heintzelman noted during his remarks during the service that of the 19.25 million veterans living in the U.S. today, nearly half are over the age of 65.

Sadly, many veterans have faced homelessness, and more than half suffer from some form of post-traumatic stress disorder (PTSD), he said.

That’s why resources for veterans and camaraderie like that which can be found at the American Legion are so important, Heintzelman added.

Former Marine Corps sergeant and Purple Heart recipient Dan Zimpfer was the guest speaker at the service, and observed that for many veterans, their service to their country doesn’t end when they are discharged from the military.

“We will continue to serve our nation and our community as veterans of the United States of America,” he said.

Medei said it has been an honor to help veterans as Legion commander for the past seven years, and he encouraged anyone in need of support to reach out to the organization.

“We need to always come together and take care of each other,” he said.

At the conclusion of the service, veterans were invited to the Legion for a luncheon. 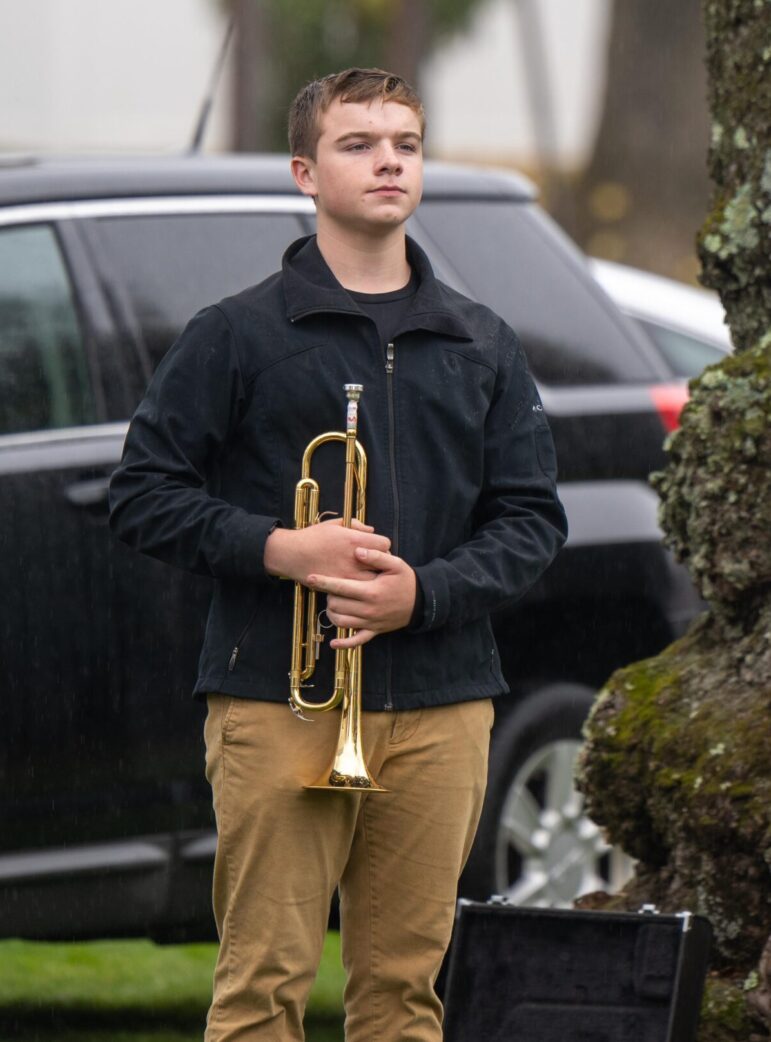 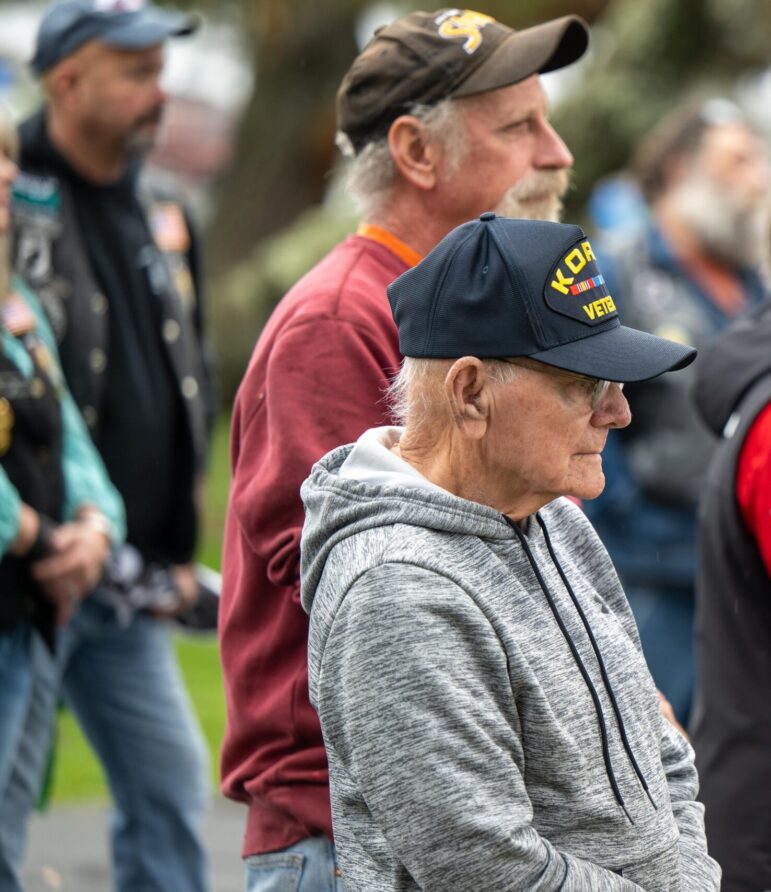 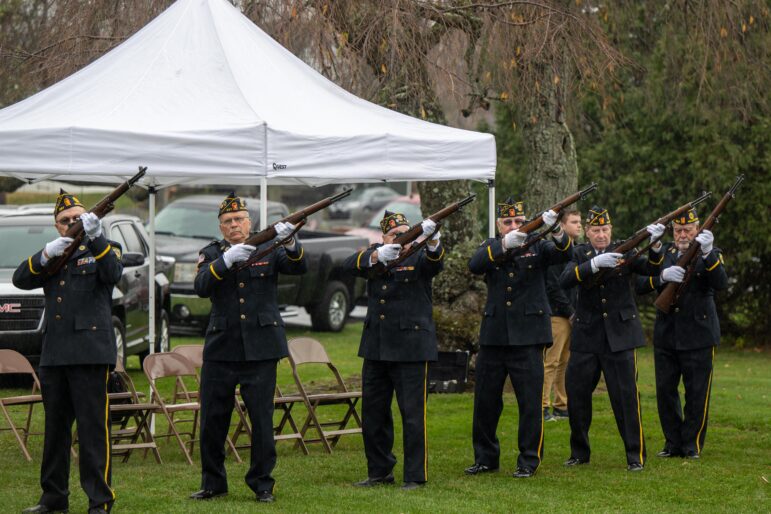 A Legion honor guard performed a military salute at the conclusion of the service. 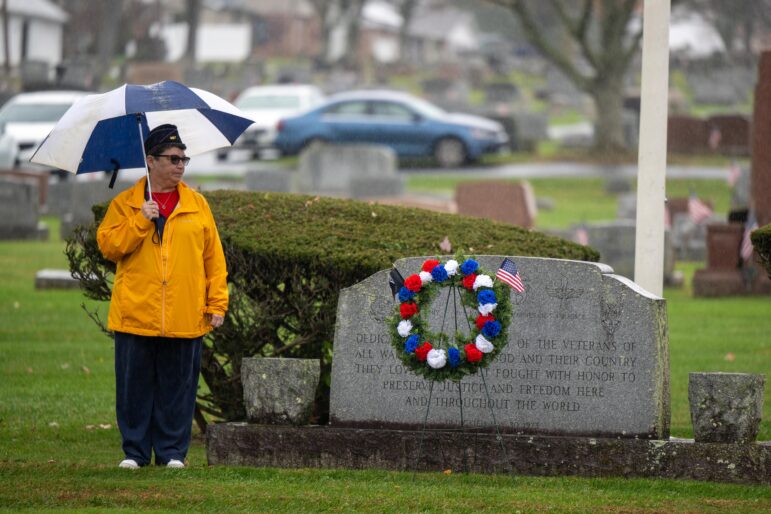 As part of the service, Hellertown American Legion Ladies Auxiliary President Connie Quier laid a wreath made with red, white and blue flowers in front of the veterans memorial in the cemetery. 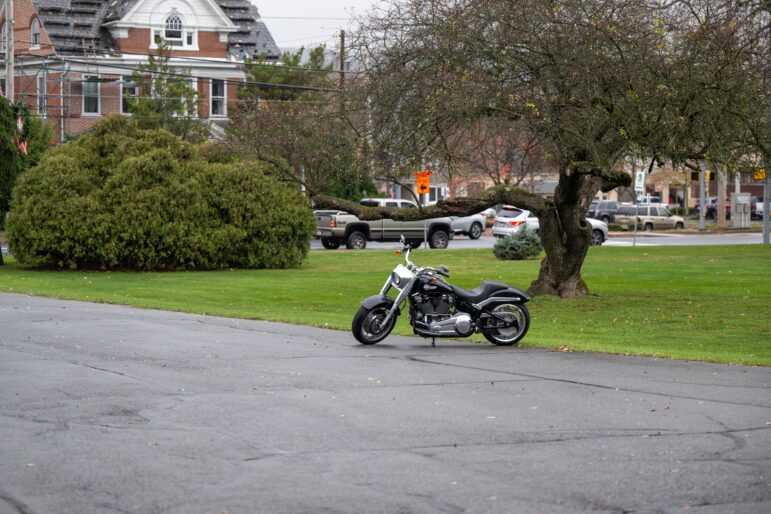 Due to the rain, most of the Legion Riders were unable to attend with their motorcycles, Commander Eric Medei said. 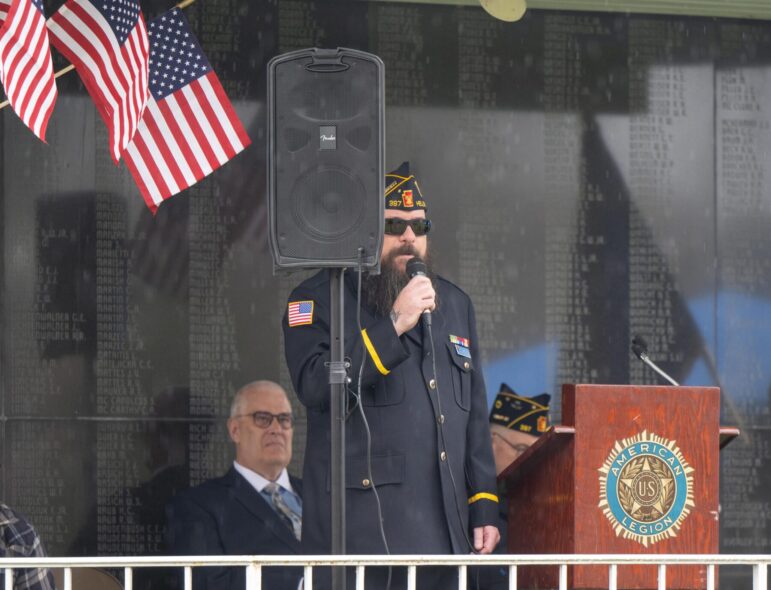 Hellertown American Legion Post 397 Commander Eric Medei addresses attendees at the Veterans Day service as Mayor David Heintzelman looks on. Medei said it has been an honor to serve local veterans as commander for the past seven years. 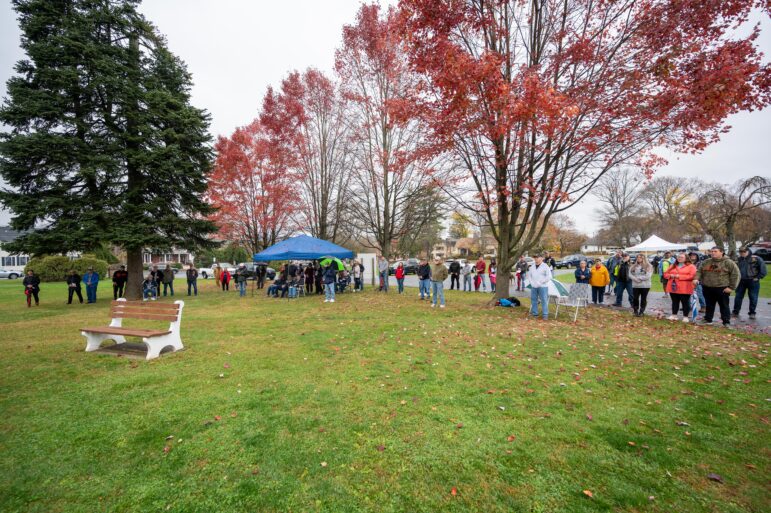 Several pop-up tents were set up for shelter near the cemetery bandshell due to Friday’s inclement weather. 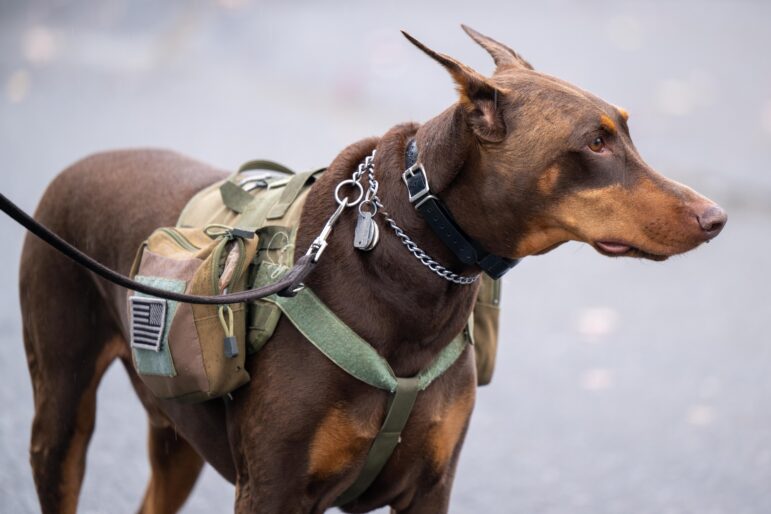 A few who attended the service to pay tribute to America’s veterans did so on four legs. 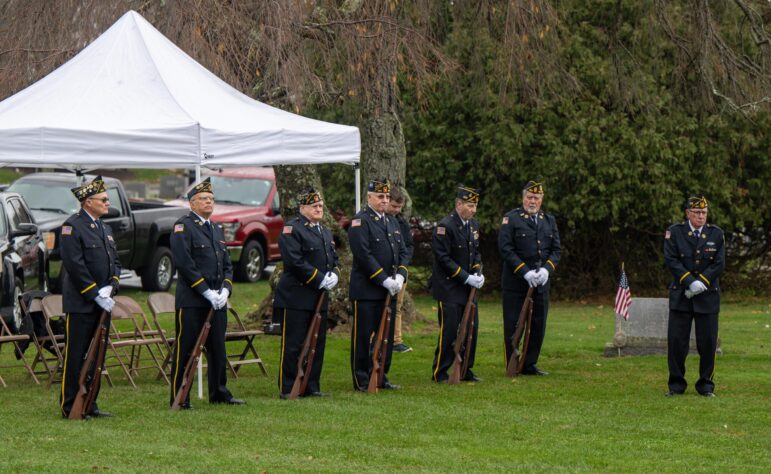 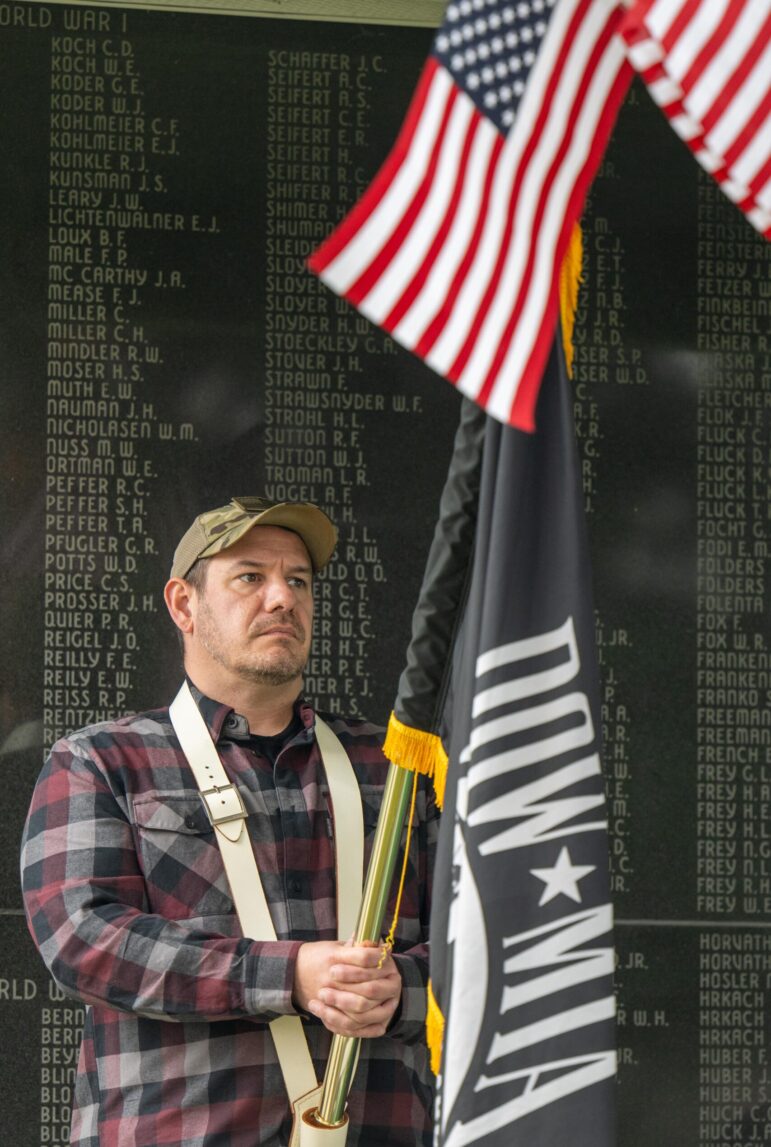 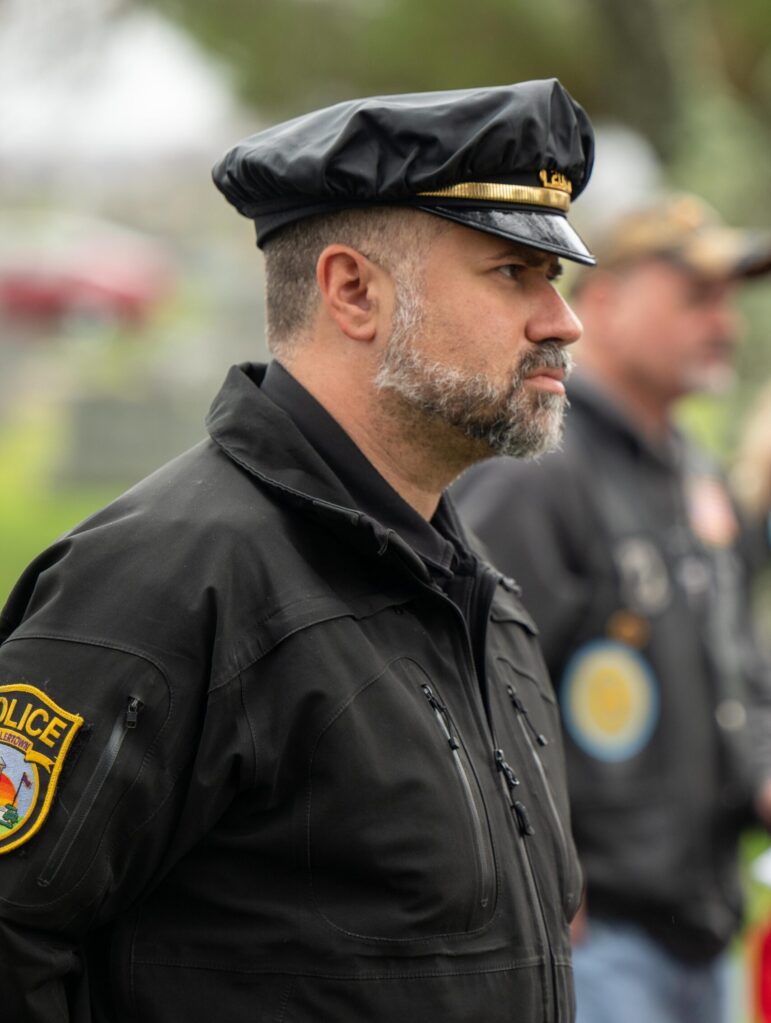 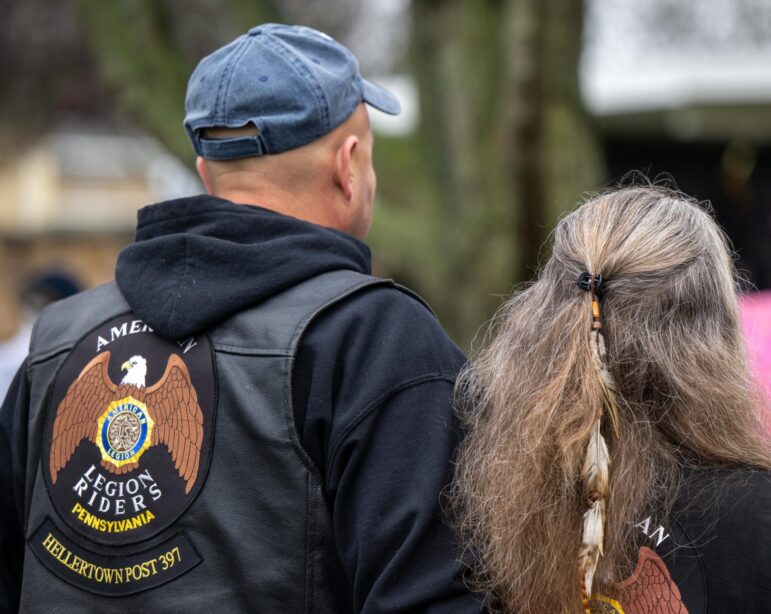 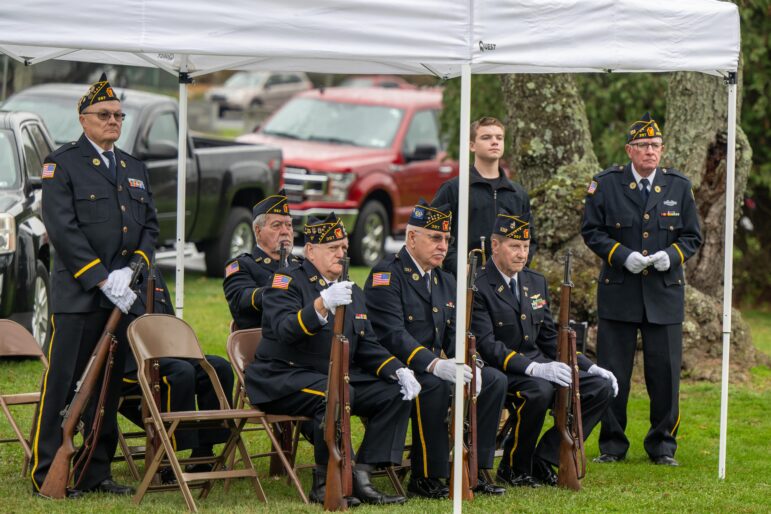 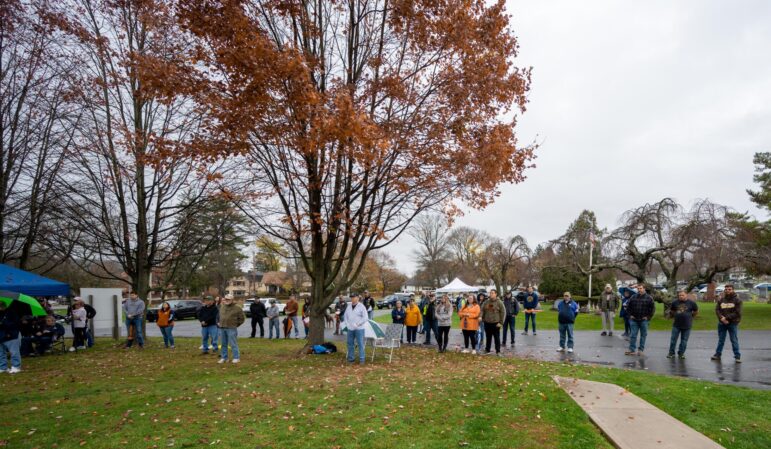