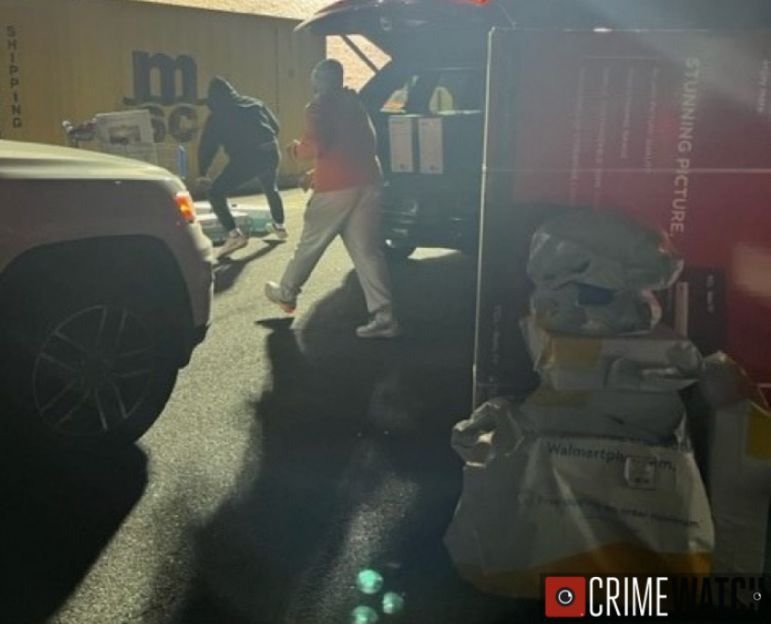 Richland Township Police say the five suspects wheeled carts full of pricy electronics outside via an employee entrance at the back of the store, to be met there by two accomplices in Jeep Grand Cherokee SUVs. (Credit: Pennsylvania Crime Stoppers)

Richland Township Police and Pennsylvania Crime Stoppers are asking for the public’s help with identifying five people who police say stole nearly $5,000 in merchandise from the Richland Township Walmart just outside Quakertown on Nov. 9.

In a Crimewatch post, authorities said the theft occurred at 8:52 p.m. at the Supercenter on N. West End Boulevard (Rt. 309), when four men and a woman wheeled three shopping carts filled with TVs, computers and other electronics valued at $4,817 outside without paying for the items.

According to police, the quintet “followed a Walmart employee out of the key card exit at the back of the store,” where they were met two accomplices who were waiting there in black and white Jeep Grand Cherokee SUVs.

From there, police said the suspects “fled the scene in the direction of State Route 309.”

Wednesday’s news release noted that the vehicles in which the suspects reportedly fled had license plates that were obscured from view, as well as dark tinted windows.

Police also said that there were paper temporary registrations taped to the vehicles’ windows, but that according to an eyewitness the registrations appeared to be fraudulent.

The five suspects in the case are Black, police said, and can be seen wearing medical masks in the store surveillance photos shared by police on Crimewatch.

Photos of the suspects’ vehicles were also included with the post.

Anyone with information about the suspects is being asked to contact Ofc. Joshua Fonseca of the Richland Township Police Department at 215-536-9500, ext. 313, or to anonymously contact the Pennsylvania Crime Stoppers by calling at 1-800-4PA-TIPS or sharing a tip online. All callers to Pennsylvania Crime Stoppers remain anonymous and could be eligible for a cash reward for information that leads to an arrest, the solving of a crime or cold case or the location of a wanted person/fugitive or missing person.