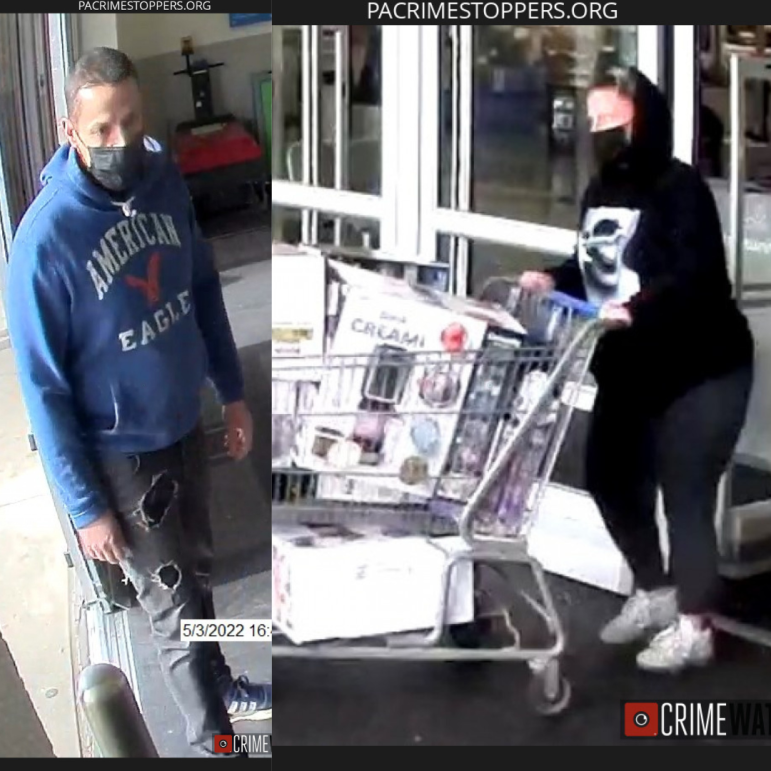 Pennsylvania Crime Stoppers released store surveillance photos of a man and woman, above, who are suspected of stealing more than $1,100 in merchandise from a Quakertown area Walmart last month. The theft occurred May 3, police said.

The Richland Township Police Department and Crime Stoppers are asking for the public’s help identifying two suspects in a theft that occurred May 3 at approximately 4:55 p.m. at the Walmart on West End Boulevard (Rt. 309) in Richland Township.

According to a Crimewatch post published Monday by Pennsylvania Crime Stoppers, the suspects stole $1,110 worth of merchandise, including three Ninja NC300 ice cream makers, a Black Max pressure washer and other miscellaneous items from the store.

Authorities said that when the suspects were intercepted by Walmart asset protection staff as they left the store, they told the employees they had picked up online orders and then showed them merchandise which displayed online pickup stickers.

“The asset protection employees then spoke with the online pickup department, who were unable to confirm this transaction,” according to Crime Stoppers.

The female suspect in the theft is described as white, approximately 30 to 40 years old and heavyset, with brown hair. At the time of the theft, police said she was wearing a black hooded sweatshirt, black pants and light-colored shoes.

The male suspect is described as Hispanic, approximately 30 to 40 years old, with short dark hair. At the time of the theft, police say he was wearing a blue American Eagle hooded sweatshirt, dark gray ripped jeans, and blue and white sneakers.

Police said both suspects fled the store in a black sedan of unknown make and model.

Anyone with information about the theft is asked to contact Ofc. Joshua Fonseca at 215-536-9500, ext. 313, or the Pennsylvania Crime Stoppers via their tipline, 1-800-4PA-TIPS (8477), or online. All callers to Pennsylvania Crime Stoppers remain anonymous and could be eligible for a cash reward for information that leads to an arrest, the solving of a crime/cold case or the location of a wanted person/fugitive or missing person.