At around 5:30 p.m. Thursday, Pennsylvania State Police and local fire company volunteers were on the scene of a two vehicle crash at the intersection of Rt. 611 and Rt. 32 (River Road) in Kintnersville, Nockamixon Township.

It did not appear that anyone was seriously hurt in the crash, and two men who were both using cell phones were standing near and to the side of the crumpled vehicles.

With the northbound lane on Rt. 611 closed due to the wreck, traffic was being detoured around the vehicles.

From the position of the cars, it appeared that the driver of a silver Volkswagen may have been turning left from Rt. 611 onto Rt. 32 when a northbound driver struck the VW.

The wreck happened during rush hour on a busy stretch of road near the Delaware River. 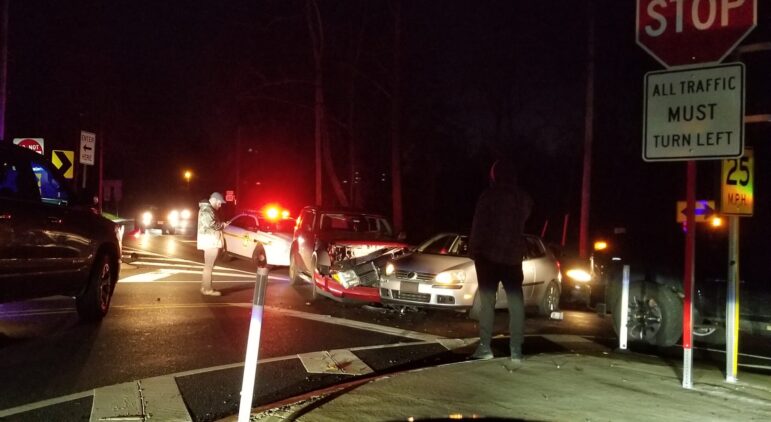 A two-car crash affected traffic in Kintnersville, Bucks County, late Thursday afternoon. The accident happened around 5:30 p.m. and involved two vehicles. It did not appear that there were any serious injuries as a result of it. Pennsylvania State Police at Dublin–who cover Nockamixon Township–as well as local firefighters responded to the scene of the wreck.