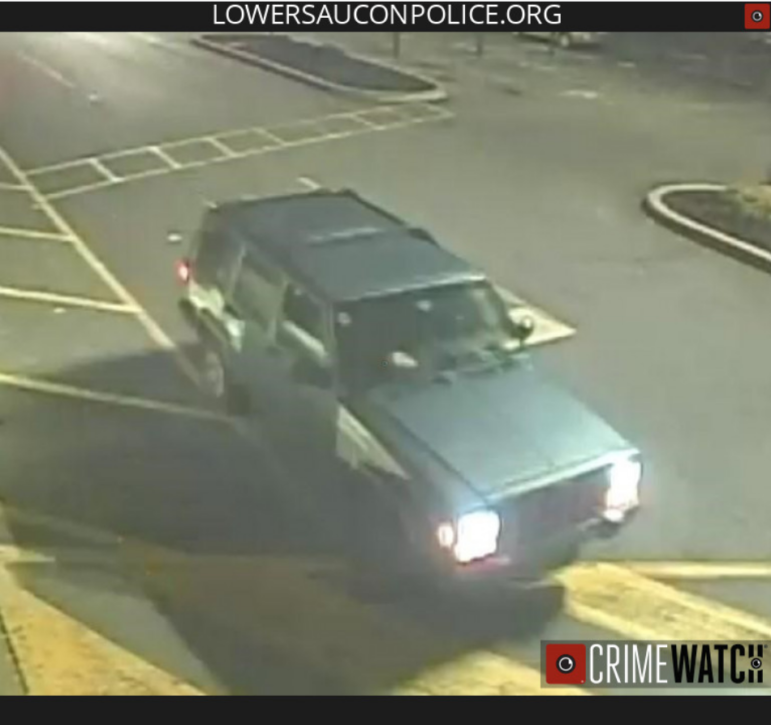 Lower Saucon Township Police are asking for help identifying the SUV pictured above, which they said is believed to be a Jeep Grand Cherokee. Police said that the suspect in a theft from a parked vehicle outside the Giant on Leithsville Road was an occupant of the Jeep when the crime occurred. (Credit: Crimewatch/Lower Saucon Townsihp Police Department)

Lower Saucon Township Police are investigating the late-night theft of several items from a car that was parked outside the Giant supermarket at 1880 Leithsville Road.

In a post on the department’s Crimewatch site Thursday police said the theft happened Wednesday between 12:30 and 1 a.m. in the parking lot outside the store, which closes at 11 p.m.

That’s when they said an unknown suspect entered the vehicle and removed a knife and two pair of sunglasses from it.

“After reviewing surveillance, it appears that the suspect actually entered another vehicle in the parking lot–which was not reported–and attempted to enter other vehicles in the lot but was unsuccessful,” police said.

The department shared store surveillance images of a vehicle they said appears to be a Jeep Cherokee, which they said the suspect was an occupant of at the time of the theft.

Anyone with information about this incident is asked to contact the Lower Saucon Township Police Department at 610-759-2200 or submit a tip through Crimewatch.

Police also urged shoppers to lock their vehicles and keep valuables out of sight whenever they are unoccupied.