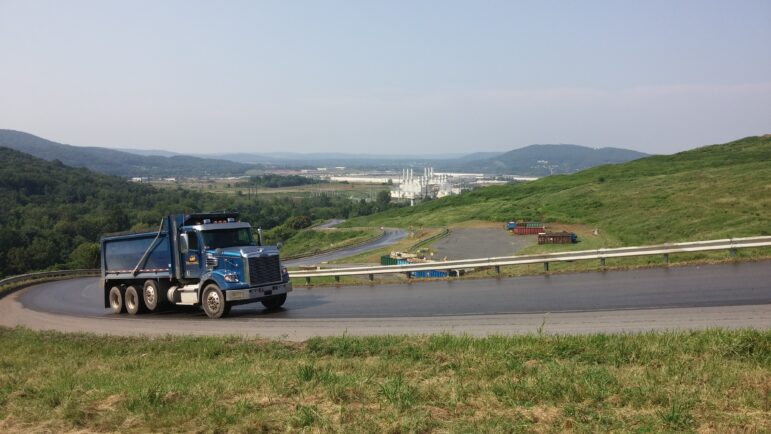 Above, a view of the Bethlehem Landfill on Applebutter Road in Lower Saucon Township. A group of township residents represented by attorney Gary Asteak filed an appeal in Northampton County court Friday over a rezoning amendment adopted by township council last month that could result in a major expansion of the facility. (FILE PHOTO)

A group of Lower Saucon Township residents who oppose a rezoning amendment adopted by township council that paves the way for an expansion of the Bethlehem Landfill filed an appeal in the Northampton County Court of Common Pleas Friday.

The appeal filed by Easton attorney Gary Asteak on behalf of Bruce and Ginger Petrie, Lawrence and Margaret Opthof, Robert and Cynthia McKellin, and Frank Palumbo challenges the rezoning on a number of grounds.

Among them is its contention that the Dec. 21 public hearing to consider revising the township’s zoning map wasn’t properly advertised and that public notice wasn’t properly given under the requirements of the Pennsylvania Municipalities Planning Code, thus depriving the residents of their constitutional right to due process.

At the same time, the appeal states that some of the information regarding where, when and how advance notice of the hearing was given is still uncertain, since a Right-to-Know request filed with the township on Dec. 22 prompted the township to invoke its right to reply to the request within 30 days. The window to appeal the Dec. 21 decision in court is only 30 days, the filing said, “thus preventing Apellants from providing in more detail specific averments pertaining to the procedural flaws in Ordinance enactment.”

It  further says that the rezoning amendment was approved despite the fact that it:

The proposed landfill expansion would essentially double the size of the facility by expanding it across roughly 275 wooded acres to the north and east of where it is currently located along Applebutter Road. The expansion, according to maps presented at the hearing, would bring the landfill close to the Lehigh River and to a tributary called Bull Run.

A number of residents who spoke at the hearing expressed concern about the potential for leachate from an expanded landfill to contaminate ground water in an area in which most residents rely on private wells for drinking water.

Dozens of residents spoke in opposition to the rezoning and expansion of the landfill at the December meeting, where the only speaker in favor of both was a representative for the company that owns the 80-year-old facility: Texas-based Waste Connections.

Friday’s suit is the second with which township officials have been served so far this year.

Earlier this month, Hellertown borough sued Lower Saucon in county court over what it says is nearly $30,000 in compost center funds it is owed by the township.

The compost center owned by Hellertown is located in the township, and is now closed amid a dispute between the two municipalities that began nearly a year ago, ostensibly with a falling out due to differences over funding for the Hellertown Area Library.

For its part, the township says it plans to challenge in court a decision by the Office of Commonwealth Libraries to remove Lower Saucon from the Hellertown library’s service area; a decision reached after regular township funding for the library ceased following council’s rejection of a new library services agreement last January.

The next Lower Saucon Township Council meeting is scheduled for Wednesday, Jan. 18 at 6:30 p.m. at Lower Saucon Town Hall. Under Township Business on the draft meeting agenda published Friday are discussions about setting a hearing date for a conditional use application by Bethlehem Landfill and establishing procedures for the hearing.