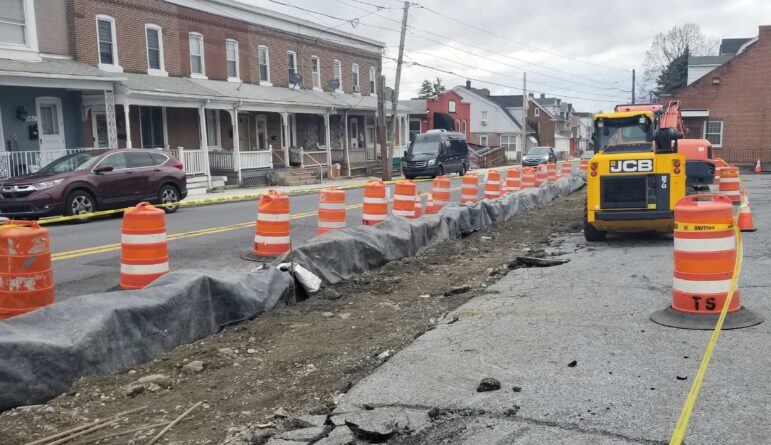 Above, a section of sidewalk in the 900 block of Broadway in Fountain Hill is currently under construction. Borough officials said Friday that someone has been carving graffiti into fresh concrete being laid in the area as part of a project that includes replacing aged and failing curbs and sidewalks.

A major overhaul of Broadway that is under way in Fountain Hill has become a target for a vandal or vandals, borough officials said in a borough-wide notification Friday.

The message that went out via the borough’s new alert system asked residents to be on the lookout for whomever is “carving graffiti into the fresh concrete on Broadway.”

Along with parts of the 900 block, a number of intersections between the Bethlehem city line and the light at Delaware Avenue are currently under reconstructionin the small municipality.

Typically the work would be on hold due to cold, but unusually mild weather this winter–with temperatures frequently above freezing at night–has allowed it continue in January.

Friday’s announcement did not specify where the vandalism occurred, but asked recipients to contact borough police if they observe anything suspicious.

“If you see anyone other than the contractor disturbing the concrete or the blankets (covering it), please call the police at 610-437-5252,” the statement said.