Today is the first day of spring, but if you’re hoping the coastal storm that is forecast to affect the area Wednesday will be another “miss,” the chances for that appear to be diminishing.

The National Weather Service has upgraded its winter storm watch for the Lehigh Valley and southern Poconos to a winter storm warning for 4 to 10 inches of snow. 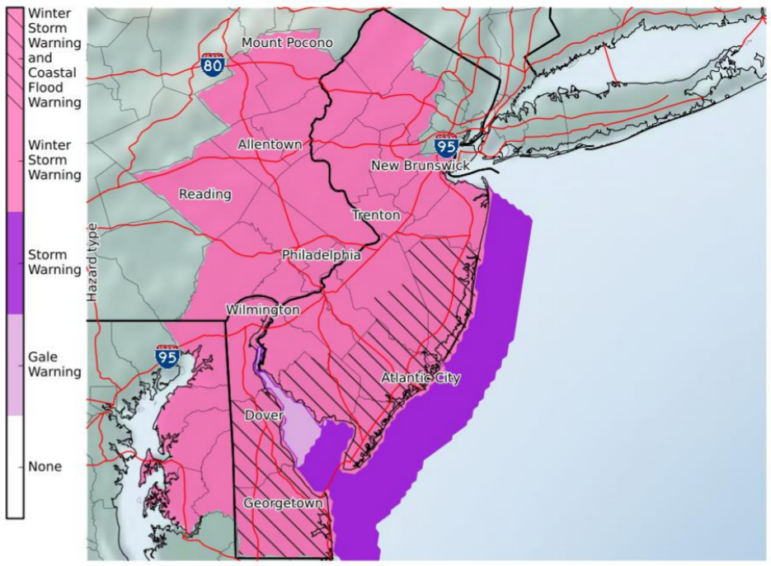 Some areas of mixed precipitation are expected to develop Tuesday afternoon, changing to all snow during the evening and becoming heavy at times overnight. The heaviest snow is expected during the day Wednesday.

“Plan on slippery road conditions, including during this evening’s commute,” the National Weather Service said in its statement about the warning. “For Wednesday, (motorists should) plan on very difficult travel conditions especially in the afternoon, including during the Wednesday  evening commute, when snowfall rates of 1 to 3 inches per hour are expected.”

The weather service warned of “significant reductions in visibility” and possible power outages Wednesday, when northeast to north winds will gust from 20 to 30 mph at times.

In its final call forecast issued Monday, Pennsylvania Weather Action called it a “major springtime winter storm” and forecast total snow accumulations of 6 to 10 inches across southeastern Pennsylvania and the southern Poconos.

“Our main concern is the weight of the snow on trees,” lead forecaster Chris Corrigan wrote. “Widespread power outages are certainly possible both Tuesday and Wednesday. It does not take much snowfall accumulation to bring down trees or power lines, especially when the snow is heavy and wet.”

“There are a lot of similarities to the Jan 2016 Blizzard, however we are going into the end of March, this is not January,” LVWA said in a post on Facebook. “(The) sun angle is very powerful this time of year, (and) accompanied with warmer surface temperatures snow can be tough to accumulate on paved surfaces. Under heavy rates this can be overcome, however. Sleet may also play a factor, which will increase overall ‘stickage’ but cut down totals.”

The first wave on Tuesday will be minor and will only deposit a trace amount to two inches of snow across southern portions of the Lehigh Valley, according to an EPAWA map.

The second wave, Wednesday, will dump three to six inches of snow across the western part of the Valley and six to nine inches (and possibly more in higher elevations) in parts of southern Lehigh County and eastern Northampton County, according to an EPAWA map.

Stay with Saucon Source for updates on this developing winter storm, including announcements about school delays/closures, snow emergencies and more.

Follow us on Facebook and Instagram. Note: On Facebook, click on the “Follow” button at the top of our page, turn Notifications on by sliding the button right–so it turns from gray to blue–and under that select the “See First” option to receive the maximum amount of local news in your feed.