The Hellertown-Lower Saucon Chamber of Commerce held a roundtable with local officials and small business owners Sept. 10 at Hellertown Borough Hall to discuss the state of bridges and transportation in the two municipalities.

The Water Street Bridge was the primary topic of discussion.

The bridge, which was suddenly closed for emergency repairs in April and again at the start of September, was built in 1938. It is scheduled to be closed for replacement from June to August in 2019.

Detours will be in place for both local and truck traffic during that time. The local detour will run from Meadows Road to Skibo Road to Walnut Street. The truck detour, which will run for approximately nine miles, will run from Friedensville Road to Hickory Hill Road to Seidersville Road to Wyandotte Street to East 3rd Street to Daly Avenue to East 4th Street to Route 412, so as to remain on state roads. 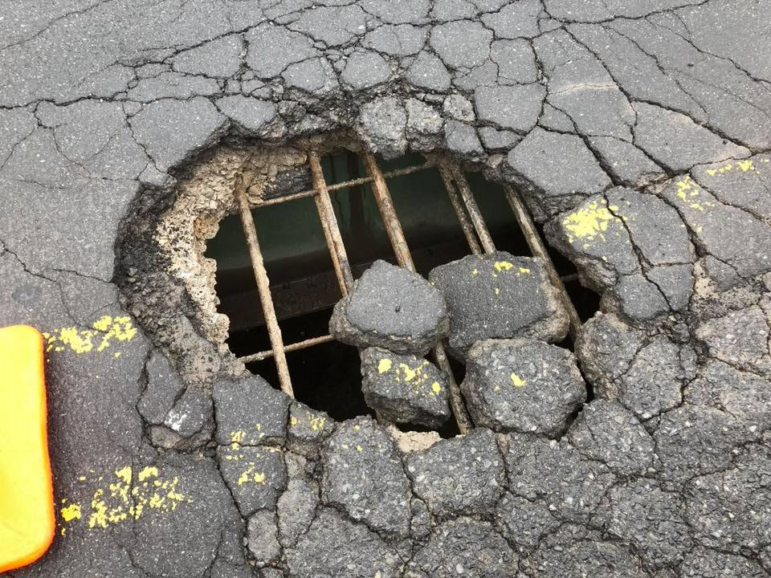 This reader photo shows a pothole that opened up in and temporarily closed the Water Street Bridge in April 2018. (FILE PHOTO)

During the closure there will still be access to Front Street, the Heller Homestead on Friedensville Road at the west end of the bridge and Water Street Park at the east end of the bridge, as well as pedestrian access across the bridge. Re-timing of traffic signals in the area will also be addressed for the closure. Once the bridge reopens, signal updates and the addition of new markings will be completed. In the meantime, PennDOT intends to inspect the bridge every two weeks following the most recent emergency closure.

The chamber also discussed the closed Meadows Road Bridge, which is slated to be either repaired or replaced. According to the chamber, the engineers have been selected and the bridge has been accepted into the TIP program to receive funding.

The bridge will take on a stamped concrete look if it ends up needing to be fully replaced.

Local officials have lobbied for the bridge to be rehabilitated to preserve its historical significance.

Since the bridge is owned by Northampton County, it will be a much slower replacement process than with the Water Street Bridge.

The county has also said it has no plans to replace the Seidersville Road Bridge behind Ravena Street in the City of Bethlehem that has now been closed for nearly eight years.

Finally, the chamber discussed pedestrian improvements that are scheduled to be made in Hellertown.

Hellertown Borough Manager Cathy Hartranft indicated that the flashing lights at the Saucon Rail Trail have been effective.

Implementation of these improvements is set to begin in the spring of 2019 and as planned will take three to four months. They should have little to no impact on traffic.