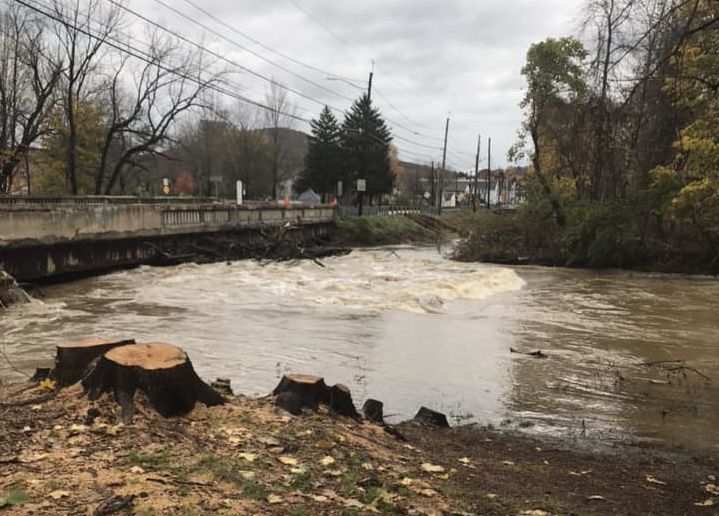 The waters of the Saucon Creek continue to recede under the Water Street Bridge in Hellertown Saturday morning. The bridge remains closed at least until a PennDOT evaluation scheduled for 9 a.m. Sunday. This photo is taken from the west bank of the creek in Lower Saucon Township, looking east toward Hellertown borough.

After a night of wild weather that included flash flooding along the Silver Creek in Hellertown, flooding along Rt. 309 in Upper Saucon Township, and even a tornado warning issued by the National Weather Service, many residents are cleaning up their properties and drying out their basements. 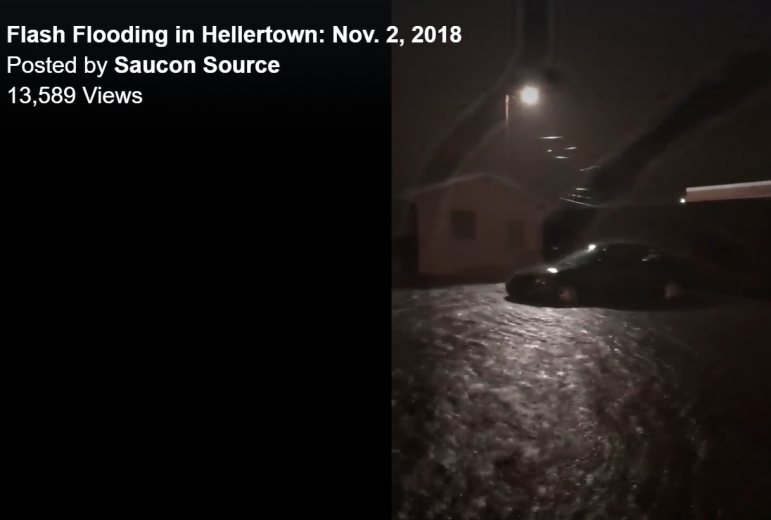 A car is surrounded by the rising flood waters of the Silver Creek in this video shot in downtown Hellertown Friday night by Becky Marie.

Local and state roads that were affected by the flash flooding Friday night have reopened as of Saturday morning, with the exception of the Water Street Bridge in Hellertown and Lower Saucon Township, which remains closed until at least 9 a.m. Sunday, when PennDOT officials say they will re-evaluate its integrity after the water level of the Saucon Creek recedes.

The 80-year-old two-lane bridge is visibly decayed, and has been temporarily closed for emergency repairs by PennDOT twice in recent months, most recently in August.

The bridge–which is a major conduit for east-west traffic into and out of the borough–is scheduled to be replaced over a period of two months next summer.

The flash flood warning for southern Northampton County that was issued by the National Weather Service was to have expired at 11:45 a.m., but has been extended until 3:45 p.m.

“At 1143 a.m. local law enforcement reported flooding continued across the warning area,” the National Weather Service said in its statement. “Several streams remained in flood, including the Little Lehigh River in Allentown, the Pequest River in Pequest (New Jersey) and Monocacy Creek in Bethlehem. Many roads remain closed. Flooding is expected to continue through the afternoon.”

Motorists who encounter water-covered roadways should follow the safety tip and “turn around, don’t drown,” rather than attempt to drive across them.

Other roads all throughout the Lehigh Valley–including I-78–were flooded by the torrential rain that fell Friday. LehighValleyLive.com has published a gallery of photos that depict some of the flooding that occurred.

The video below was shot by Hellertown resident Becky Marie and shows flash flooding along the Silver Creek in the area of the 600 block of Main Street, which is in downtown Hellertown.