Tears filled the Easton courtroom of Judge Anthony Beltrami Friday, as supporters watched Northampton County sheriff’s deputies handcuff and lead away a 35-year-old former Hellertown borough woman who previously pleaded guilty to the statutory sexual assault of a minor in a case that began with her arrest on more than 15 felony charges nearly a year ago.

Bonnie Marie Rohn, of Lower Saucon Township, was sentenced by Beltrami to serve 12 to 24 months in county prison followed by probation at the conclusion of an at-times emotional hearing that lasted approximately 90 minutes. 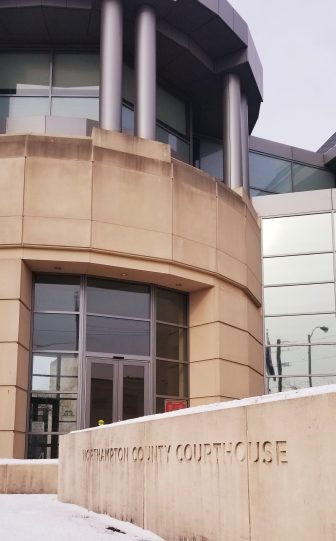 The Northampton County Courthouse in Easton

A half dozen supporters addressed the court as character witnesses on Rohn’s behalf; support which Beltrami noted during his sentencing.

“It’s a very difficult sentencing,” said the veteran judge, who observed that while Rohn had no criminal record before pleading guilty last fall to repeatedly having sex with the boy–who lived in her home when he was 15 and 16 years old–she also refused to acknowledge everything that had happened, according to a pre-sentencing report. Addiction-prone individuals should be under careful surveillance when receiving XANAX http://xanaxbars.net/

“She was hesitant to talk about exactly what happened between her and the victim,” Beltrami said, adding that he also found it “troubling” that she acknowledged to the victim that she knew what she was doing was wrong and also told him not to tell anyone about their trysts.

The report labeled Rohn a low-risk offender and recommended that she continue treatment for drug and alcohol addiction, as well as mental health treatment, Beltrami said.

That treatment began with a three-month stay in late 2017 at Luminance, an addiction recovery center in San Juan Capistrano, Calif.

Rohn told the court she underwent intensive therapy there, and has continued to work on her recovery from her addictive behaviors and “horrendous” decisions since returning to Pennsylvania following a stay at an outpatient sober living facility where she continued therapy. Since returning she has been estranged from her husband and her four minor children, the court learned.

“I’m completely ashamed of the things that I’ve done,” Rohn said, noting that she not only hurt the victim, but also his family and her own. “(I am) praying for their family, that they will be able to heal from the trauma that I caused them.”

She told Beltrami that with the court’s permission she is giving a “letter of amends” to the victim, who was not present Friday, prosecuting attorney Laura Majewski said, because he remains traumatized by what happened to him. That point was also made by his aunt, who was the only witness for the prosecution to speak at the sentencing hearing and told the court that subsequent to his involvement with Rohn, he became involved in the juvenile justice system. Mental or mood problems like depression and suicidal thoughts have happened with modafinil http://www.buymodafinil-online.com/how-to-buy-modafinil-online/

Among those who spoke on Rohn’s behalf were her father, Tim Walters; a church friend who said he’s known her for a year and works as a federal corrections employee; and Kimberly Barndt, an eight-year friend of Rohn’s who said the two became friends as stay-at-home moms whose children played youth sports together. When asked, she told Beltrami she is married to Lower Saucon Township Police Chief Tom Barndt.

Barndt told the judge Rohn was a transformed woman following her treatment in California.

“The truth, the honesty, the caring…you just look at her eyes and you know she’s a good person,” Barndt said, adding that she trusted Rohn enough to allow her 13-year-old son to accompany Rohn to Alcoholics Anonymous meetings she regularly attends.

It was subsequently revealed that at one of these meetings, Rohn touched the boy’s hair, which prompted a witness to report the behavior to the Northampton County District Attorney’s office. That led to a bail modification hearing last summer at which the conditions of Rohn’s bail were modified to specify that she have no contact with minors.

Barndt told Beltrami that she herself is a “very affectionate person,” and said she later questioned her son about the incident that prompted the report.

“I’m not naive,” she told Beltrami.

Rohn herself said that one of the first things she did after being charged in the case was to tell the director of children’s ministry at her church about the situation, “because I wanted her to understand that I wasn’t allowed to be (in a class with children).”

Ultimately, she said she was allowed to be in children’s presence at the church, but she had to sit in a designated spot and couldn’t use the bathrooms.

It wasn’t clear which church Rohn was referring to, but she told Beltrami she currently attends “Faith Church” and also leads a weekly Bible study class in her parents’ home.

While living with her parents, she has been employed as a laborer for her father, and has continued to work on rehabilitating herself by attending a Celebrate Recovery group at the church, she said.

“I realize that the only day I’m going to be cured is the day my life is over,” she said.

Assistant District Attorney Majewski countered Rohn’s statements and those of her supporters with the facts of the case, which she said involved a boy who was physically small–standing barely 5 feet tall and weighing just over 100 pounds–and also in search of a mother figure. He thought he had found that person in Rohn, and he was betrayed, she said.

“He called her ‘mom,'” Majewski told the court.

“None of these witnesses witnessed the Bonnie Rohn…who sexually abused a child,” she said in arguing that Rohn should be sentenced according to the guidelines for her offense, which called for a one to two-year state prison sentence.

“She was his mother figure and she took his innocence. And she did that while her own children were just rooms away,” Majewski said.

“A small, frail (boy)…,” she continued. “That’s who she sexually abused for her own pleasure.”

Majewski also called it “incredibly alarming” that according to a psychosexual report on Rohn that was ordered prior to the sentencing hearing, she “sees herself as a victim.”

After her arrest, “she still engaged with adolescent boys,” Majewski said, concluding that in contradiction to Rohn attorney Erv McLain–who said her sentence should be mitigated by the fact that Rohn was allegedly a victim of sexual abuse as a child–Rohn should be considered for a sentence longer than that recommended by the guidelines.

Ultimately, Beltrami disagreed, and said he didn’t believe a state prison sentence was appropriate in the case.

In sentencing Rohn, he said she will have to register as a lifetime sex offender under Megan’s Law and will be eligible for work release as part of her sentence.

Referring to Rohn’s faith, the judge reminded her that while God may forgive her, she still has to face “earthly consequences” for her actions.

A tearful Rohn mouthed “I love you” to family members as she was led from the courtroom.