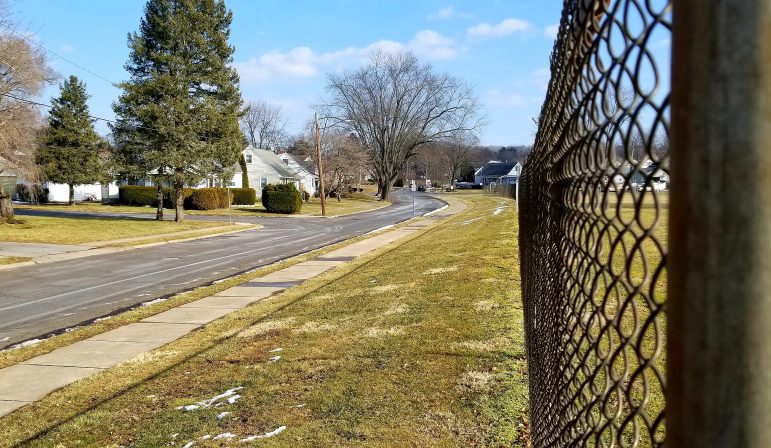 Pictured: The chainlink fence that surrounds Reinhard field on the E. Saucon Street side of the field. The Reinhard School building which once occupied part of the field was demolished by the Borough of Hellertown more than five years ago.

A petition signed by about 45 residents of a Hellertown borough neighborhood where construction of a new public works building is proposed was presented to borough council at its meeting Monday night.

Calling themselves the Concerned Neighbors of Reinhard Field, the petition reflects widespread opposition to the plan by the residents who live on streets surrounding and near the field, organizer Bill Broun said.

“Virtually every neighbor and property owner we approached…has been adamantly opposed to the plan,” he told council.

We, the undersigned, petition the Mayor and Council of the Borough of Hellertown, Pennsylvania, as follows: A planned public works truck garage and heavy equipment storage facility at Hellertown’s old Reinhard School site–as approved by council in meetings in September 2018–represents a threat to the safety, peaceful character, property values, and recreational space available to the densely populated community in the immediate and wider neighborhoods contiguous to Reinhard Field. The plan is historically and aesthetically out of keeping with longstanding contiguous residential zoning. The potential effects on our children’s safety and well-being particularly trouble us. We also view with distress the prospect of the introduction of noise and traffic; the loss of a beloved, heavily used recreational space; and the degradation of the neighborhood’s long-established character. While we acknowledge the borough’s needs for storage space for large diesel vehicles and heavy equipment, Reinhard Field is the wrong place for this purpose.

Council has said the building is necessary because the borough police department is facing a critical space shortage, and in the near future will need to expand into space now used by public works.

Council also said the plan will only move forward if it can secure outside funding to help pay for the building.

Few if any other sites are available to construct such a facility within borough limits, council has said.