The historic Meadows Road Bridge in Lower Saucon Township has been closed to traffic for nearly two years. Built in 1858, the one-lane bridge spans the Saucon Creek just west of Rt. 412, south of Hellertown borough. Although preservationists want to see it restored, the bridge’s fate ultimately rests in the hands of Northampton County officials, who haven’t yet announced whether they intend to repair or replace it.

A 162 year-old stone arch bridge in Lower Saucon Township that is under threat of removal was placed on a statewide list of endangered historic properties Thursday; a move supporters hope will encourage Northampton County officials to rehabilitate it.

Preservation Pennsylvania, a nonprofit organization dedicated to the protection of historically and architecturally significant resources in the Commonwealth, announced that the county-owned Meadows Road Bridge was one of just six properties–and one of two in the Lehigh Valley–to be added to the list in 2020.

“Since 1992, Preservation Pennsylvania has published the Pennsylvania At Risk list to draw statewide attention to the plight of Pennsylvania’s historic resources; promote and support local action to protect historic properties; and encourage funding and legislation that supports preservation activities,” the organization said in a news release.

“The picturesque four-arched Meadows Road Bridge was built in 1858 and is the oldest bridge in Lower Saucon Township,” the news release noted. “In Northampton County, it is one of the oldest surviving bridges and is one of only two examples of a four-span stone arch bridge.”

The Meadows Road Bridge has been closed since April 2018, when inspectors determined it was unsafe to continue allowing traffic to cross it.

Since then, there have been discussions by both township and county officials about whether the bridge should be repaired or rebuilt, and in either case, how a plan to do something should be executed.

Township officials have gone on the record to say they want the bridge saved, however county officials have not expressed a strong desire to preserve the structure, which as a one-lane span is functionally obsolete from an engineering standpoint.

Some of the bridge’s supporters also believe its architectural integrity has been compromised by repairs made by the county that may not have been in keeping with historic preservation best practices.

For example, township officials have said Portland cement was used to repoint the bridge’s stonework instead of a type of mortar that would have been historically accurate.

In spite of those repairs, in July 2019 it was announced that the bridge is eligible for placement on the National Register of Historic Places.

Preservation Pennsylvania shared some of the Meadows Road Bridge’s unique history in its news release and in a profile of it published in their Winter 2020 magazine.

The magazine article notes that the bridge is one of very few survivors from the pre-Civil War period, when commerce and industry were beginning to flourish in Saucon Valley.

Northampton County records from 1860 show that at that time, Levi S. Moyer was the wealthy owner of a nearby gristmill along Meadows Road; a mill which still stands today.

Such a mill would have been an important destination for local farmers in the mid-19th century.

“The bridge connected farmers to the mill, just as today it connects local citizens to offices and retail from one side of Lower Saucon Township to the other,” Preservation Pennsylvania noted.

A more recent chapter in the Meadows Road Bridge’s long history occurred in the 1970s, when the county attempted to replace it with a modern span.

“In 1976, when the county announced plans to replace the bridge, several local citizen groups wrote letters requesting that the bridge be saved,” Preservation Pennsylvania reported. “The public outcry and support for preservation of the existing bridge led the county to withdraw its plans for replacement.”

Regardless of whether or not the current span is restored or replaced, area residents should not expect the Meadows Road crossing to be available for their use anytime soon.

The design phase, engineering work and environmental studies required to construct a new bridge typically take years to complete. Environemental and other regulations must be met. And any effort to repair the bridge while maintaining its historic and architectural integrity will also likely require extensive planning.

The Water Street Bridge in Hellertown and Lower Saucon Township–which was replaced in 2019–was the end result of approximately five years of engineering and other work. 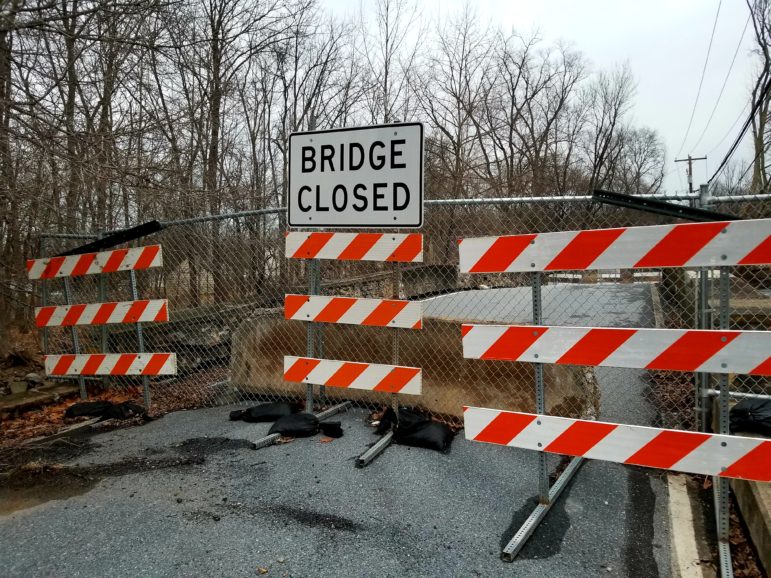 The sight of barricades, chain link fence and a “Bridge Closed” sign has greeted visitors to The Meadows banquet hall at 1770 Meadows Road, Lower Saucon Township, since the Meadows Road Bridge was closed to traffic in April 2018. It is unknown when–or if–the historic stone arch bridge will reopen, however preservationists are hopeful that attention from the bridge’s Pennsylvania At Risk 2020 designation will help rally support for its rescue and rehabilitation.