Note: Information in this story has been updated as of May 26, 2020, due to the release of new figures by the Pennsylvania Department of Health. All information is accurate as of the latest update, per the department. For updated statistics on all of the nursing homes that have reported data to the state, visit the PA Department of Health website.

New data released by the Pennsylvania Department of Health is revealing just how extensively COVID-19 has spread in many of the area’s nursing homes and personal care facilities, in which approximately two-thirds of deaths linked to the virus have occurred.

The list of nursing homes–grouped according to the county in which they are located–identifies the number of patients and/or employees that have contracted COVID-19 in them as well as any deaths that have occurred as a result of the novel coronavirus. Some information is redacted to help safeguard patient privacy; specifically, if there are fewer than five in any category the number has been replaced with an asterisk.

Prior to Tuesday, only publicly-owned facilities had shared data about case and death totals, and this week’s data release confirmed that the Lehigh Valley’s two county-owned homes are among the hardest-hit.

Gracedale in Upper Nazareth Township, Northampton County as of May 26 had reported 216 resident cases since the outbreak began. That number reflected an additional 11 cases since the first DOH report was issued May 20. The number of cases among staff members had increased by one–to 41–as of May 26. Some residents and staffers have recovered, the county said last week, but the data from the state doesn’t break out recovery statistics.

As of May 26 the state reported that a total of 45 Gracedale residents had died from COVID-19, or one more person than was initially reported May 20.

At Lehigh County’s publicly-owned nursing home, Cedarbrook, as of May 26 there had been 173 cases of COVID-19 among residents of its two facilities; a total that reflected an increase of 58 cases since the state first released numbers May 20. As of May 26, a total of 66 staff members had been infected–or 25 more than the state first reported May 20–and 29 residents had died from COVID-19. 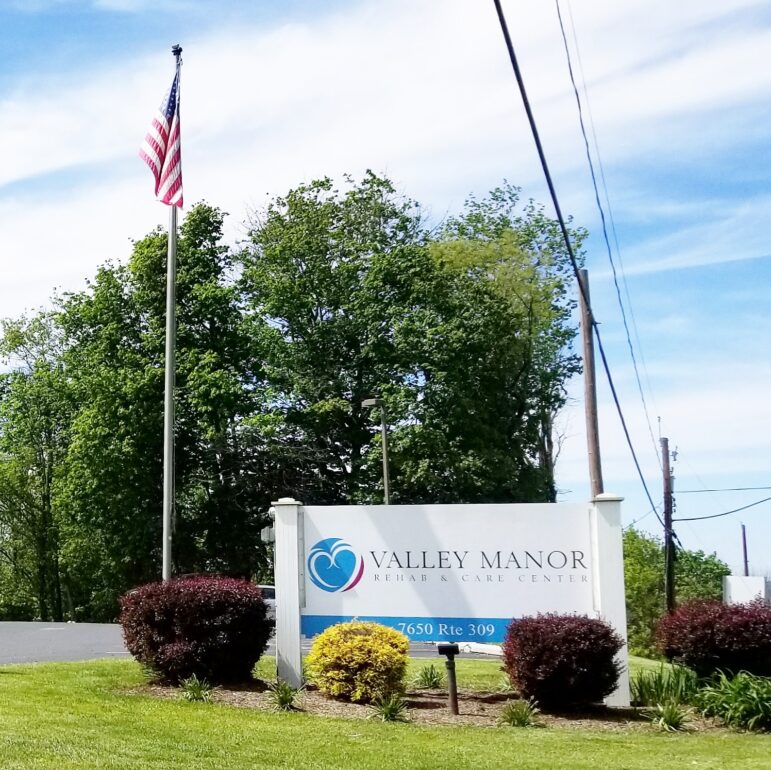 With more than 120 confirmed cases of coronavirus among its residents per the state Department of Health, Valley Manor Rehabilitation & Healthcare Center in Springfield Township has one of the highest caseloads of any nursing home in Bucks County. As of Wednesday, May 26, a total of 17 Valley Manor staff members had tested positive for the virus (one more than initially reported May 20) and 23 residents had died from it (six more than initially reported May 20).

One of the worst-impacted privately-operated nursing home facilities in the area lies just outside the Lehigh Valley in Springfield Township, Upper Bucks County.

According to the Pennsylvania Department of Health, as of May 26 Valley Manor Rehabilitation & Healthcare Center on Rt. 309 south of Coopersburg had reported 123 resident cases, 17 employee cases and 23 deaths caused by the virus.

Within Northampton and Lehigh counties, the ManorCare facilities–three of which are in Lehigh and one of which is in Northampton–together had a combined caseload of 378 as of May 26 (an increase of 45 cases since the state first shared data May 20) and a total of 42 deaths (an increase of two since May 20) between them. A total of 57 staff members at the four facilities have been infected by the coronavirus, ManorCare reported.

It should also be noted that the state has not provided statistics about the total number of residents in each care facility; information that would be needed in order to calculate incidence rates of illness and/or death within each facility.

To view the complete list of nursing homes that have reported data to the state, click here. For more information about COVID-19 and its impact on residents of nursing homes in Pennsylvania, visit the Department of Health website.

The following nursing home data for facilities in Lehigh and Northampton counties is taken directly from the state’s report. Location names for the facilities have been added.

The columns containing numbers, from left to right, list the number of resident cases, the number of staff cases and the number of deaths in each facility (where applicable), respectively. If an * appears in place of a number, the information has been redacted.

Note: For updated statistics on the following facilities (as of May 26, 2020) click here.