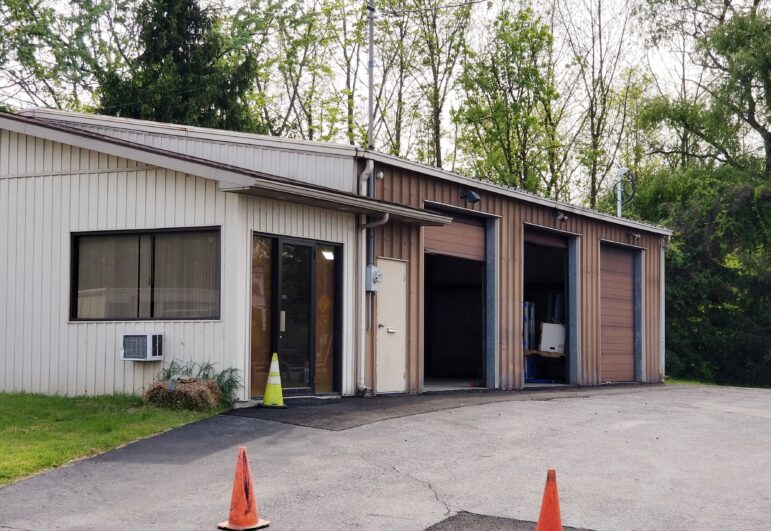 The Hellertown Planning Commission recently approved a proposal for a pizza shop in a former automotive service facility at the corner of Front and Water streets, adjacent to the Saucon Rail Trail.

The Hellertown Borough Planning Commission voted May 12 to approve plans for a restaurant specializing in pizza and other casual cuisine in the former JCL Automotive building at 662 Front Street. The property, which is owned by Chris Limantour of Hellertown, has been vacant since the dealership/automotive shop moved to a larger facility on Main Street at the south end of town.

A group led by Franco DiCarlo looks to take advantage of the site’s close proximity to the popular Saucon Rail Trail, which runs parallel to Front Street just west of the property. A trail entrance is on Water Street, adjacent to the building, and will allow for access.

DiCarlo’s plan is to create a restaurant that conforms with the borough’s Trail-Oriented Overlay district, which allows for additional commercial development along Front Street.

He told planners that “(he goes) to the path constantly…”

“We just think it’s an incredibly unique place, to take and repurpose what was an old garage and make it into this… to work with the existing layout,” DiCarlo said.

DiCarlo further described the plans for the restaurant, which look to largely retain the current structural features of the building as part of an “open concept.”

Keeping the roll-up doors would “pay homage” to its history as an automotive shop, he said, as well as provide an “open, airy, inviting” atmosphere for patrons, many of whom are expected to be trail-goers and others traveling on foot or bicycle through the borough. For this reason, the restaurant would provide a bike rack in addition to traditional vehicular parking. DiCarlo also mentioned that they were planning on applying for a grant through Hellertown’s facade and streetscape grant program.

When asked by commission members for details about the restaurant’s operations, including prospective business hours, DiCarlo said tentative plans are to be open from noon to late evening, which he defined as “8 or 9 p.m., maybe a little later on a Saturday.”

He added that the hours may be “somewhat conditional based on business and time of year,” due to the proximity to the rail trail. Breakfast options are also under consideration, he said, as they will have a takeout/to-go room, although he admitted that they “can’t be everything for everyone.” He touted plans for a diverse menu, with vegan options and a gluten-free pizza crust and described the overall menu concept as being “very simple food, (but) very high quality. Humble, but premium.”

Commissioners Kim LaBrake and Maria Diaz-Joves did express a few concerns, mostly related to pedestrian safety getting to the restaurant from the rail trail, as there is currently no sidewalk on the south side of Water Street. Diaz-Joves suggested that a sign directing individuals on the trail to use the Saucon Street exit onto Front Street could help redirect people in a safer way to the restaurant. On the whole, however, the proposal had a positive reception, with commission chair Philip Weber mentioning that “when we first talked about the rail trail, we talked about having a place where people could sit down and have a drink.” Ultimately, the commission voted to approve the proposal.

In other business at the meeting, commissioners tabled a discussion about plans for a Starbucks in the former Bank of America building at Main Street and Polk Valley Road.