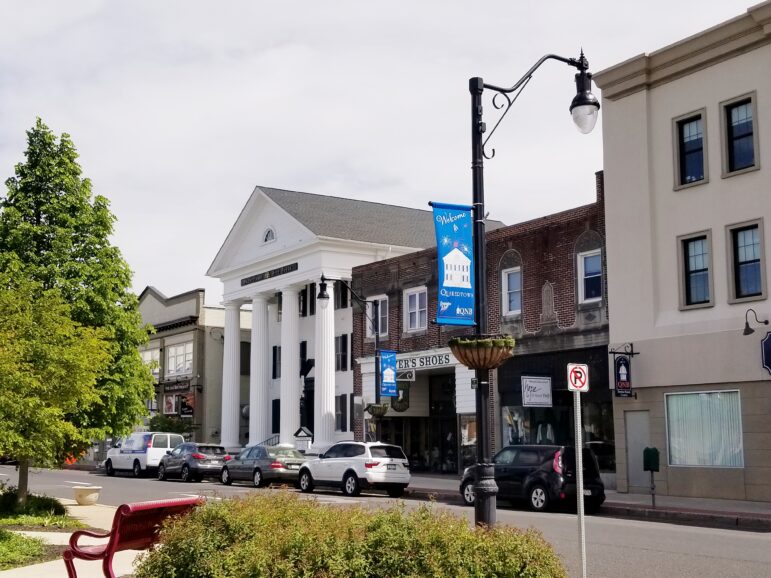 Broad Street in downtown Quakertown, as seen from the area of the Triangle (FILE PHOTO)

UPDATE: Although earlier social media posts indicated a Black Lives Matter protest planned for downtown Quakertown Tuesday had been canceled over safety concerns, a small demonstration did in fact take place in the Triangle along Broad Street Tuesday. The Upper Bucks Free Press reported in a Facebook post that several dozen protesters took part, holding up signs that denounced racism and expressed anger over the death of George Floyd. Quakertown borough police were also present during the protest.

A protest decrying the death of George Floyd and opposing racism that was planned for Tuesday at noon was canceled in Quakertown after supporters indicated in social media posts that others attempted to intimidate them by sharing names of people who had liked a Facebook post about the event, named its organizer and urged gun owners to fill the downtown.

“A protest was supposed to happen in Quakertown, PA, but a woman posted this to Facebook, threatening the lives of those wanting to come protest,” tweeted Jeremy Werner (@MegaFooby) early Tuesday.

The Facebook screenshot included redacted information but was meant to show that those who were supporting the event on Facebook were being intimidated by another poster.

“I’m disgusted that adults of Quakertown Community Senior High School are encouraging graduates to hold a “peaceful protest” in downtown Quakertown tomorrow and on Saturday, 6/6!” that poster wrote Monday. “Don’t be fooled, this is a BLM protest!”

BLM is an acronym for Black Lives Matter, an anti-racist activist group that has been involved with many of the protests nationwide since Floyd died May 25 after a Minneapolis police officer kneeled on his neck for nearly eight minutes. The results of a private autopsy conducted on Floyd were released Monday, and included the findings that his cause of death was asphyxia and his manner of death was homicide.

Black Lives Matter organized a protest in Bethlehem Saturday that was peaceful and attended by hundreds, with little visible police presence.

The Facebook poster who railed against the planned Quakertown protest for being part of the Black Lives Matter movement attempted to intimidate those who supported it simply by “liking” a post about it, Werner’s documentation showed.

“People on Quakertown Neighborhood Assocation wanted names for this UNNECESSARY protest so here they are,” the Facebook poster wrote. “Starter of the protest: Democrat & BLM supporter, and Jews for Radical and Economic Justice on Twitter, (redacted). Likes of her post regarding the protest: (redacted). … I’m disgusted with all of the above for bringing this BS to downtown Quakertown WITHOUT a permit I might add!”

According to the American Civil Liberties Association (ACLU), Pennsylvania chapter, a permit is needed if passage on a sidewalk or street will be blocked by protesters.

Separately, Werner also tweeted a screenshot of a Facebook post by a different individual that urged gun owners to pack downtown Quakertown, apparently as an anti-protest intimidation tactic.

Another person (same town) wanted to surround the protesters with guns.
They'd rather have bodies on the floor than a busted window. pic.twitter.com/MaAhdtJlWR

“All legal firearm owners in Q-town should make themselves available and viewable in plain sight along Broad Street tomorrow in front of local businesses to show we ain’t gonna take no BS…and protect our town…think I’m blowing it out of proportion!?! Better safe than looted,” it said.

Another Twitter user, Christian Holman (@Chris_Holman21), lamented the fact that Tuesday’s protest was canceled, blaming it on racism.

“My town literally planned a protest and racist (sic) literally want to create a riot,” he tweeted. “Can’t do anything for us black people.”

My town literally planned a protest and racist literally want to create a riot. Typical Quakertown. Can’t do anything for us black people

In the 2010 census, the population of Quakertown was reported to be 90.4 percent white, 2.4 percent African American, 0.3 percent Native American, 2 percent Asian, 2.7 percent from other races and 1.9 percent from two or more races, with 6 percent of residents identifying as Hispanic or Latino of any race.

According to a tweet by @sadlilbrownboy the protest in Quakertown Tuesday was canceled because “theyre (sic) concerned for safety.”

Another protest in the Triangle in downtown Quakertown that is tentatively planned for Saturday, June 6 at noon was highlighted in a different tweet.

Most of the protests in the area are being advertised through viral social media posts.