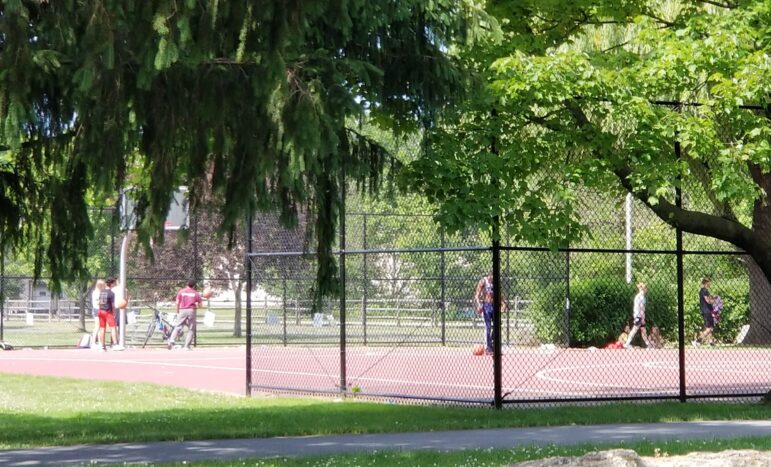 The basketball courts in Hellertown’s Water Street Park have been a popular destination since play was allowed to resume on June 5, when Northampton County entered Pennsylvania’s yellow phase of post-pandemic reopening. The courts are often filled with players well into the evening.

As Northampton County transitions into the yellow phase of reopening, some outdoor recreational activities are available for residents to enjoy once again.

In a June 4 news release the Borough of Hellertown announced that all of its playgrounds were reopening. The press release noted that use of the playgrounds is at your own risk and is subject to the Pennsylvania Recreation and Parks Society Reopening Guidelines.

The borough has also reopened its basketball and volleyball courts, although it is mandated that no more than 10 players are permitted to use a court at one time.

Guests using the playgrounds and ball courts are encouraged to bring their own hand sanitizer and obey all posted signage. Public restrooms and water fountains will remain closed throughout the yellow phase.

The borough also confirmed that the Hellertown Pool will remain closed. A Change.org petition to reopen the pool has reached nearly 500 signatures since launching in May. However, borough council decided it would not be able to safely operate a pool of its size while adhering to the Pennsylvania Recreation and Park Society’s guidelines. The release also noted that opening the pool this summer could result in a “significant financial loss.”

Bethlehem Mayor Bob Donchez announced in a June 9 press release that the city would reopen its popular Skate Plaza, dog park and playgrounds on Wednesday, June 10.

The city’s basketball courts will remain closed until the county enters the green phase despite interest from citizens, according to Jodi Evans, Director of the Bethlehem Recreation Bureau.

“There is definitely a lot of interest from people regarding basketball, however there are still some concerns about how social distancing will be possible,” Evans said.

Bethlehem’s tennis courts have remained open throughout the COVID emergency.

The United States Tennis Association’s COVID safety guidelines have been posted at the city’s courts, and they are to be followed by anyone who uses them.

The city’s pavilions and rental fields remain closed at this time, Evans said.

Lower Saucon’s parks and trails continue to remain open, and the press release encouraged people to socially distance when using them.

“As parks and trails are increasingly being counted on as places where people can engage in regular physical activity and find respite, please practice social distancing,” it said.

The township said it received a complaint earlier in June about an organized baseball or softball team using the Town Hall Park field. According to Gov. Tom Wolf’s three-phase, color-coded reopening plan, organized sports with little to no contact are not allowed to resume until their county enters the green phase.

The township has provided a field use form for people to use to request access to ball fields when the green phase is announced.

The Borough of Fountain Hill is also continuing to keep their playgrounds and ball courts closed, according to borough council member Jamie Johnson.

Johnson said the borough does not currently have plans to reopen those facilities, but they may be an agenda item at the Wednesday, June 17 borough council meeting.