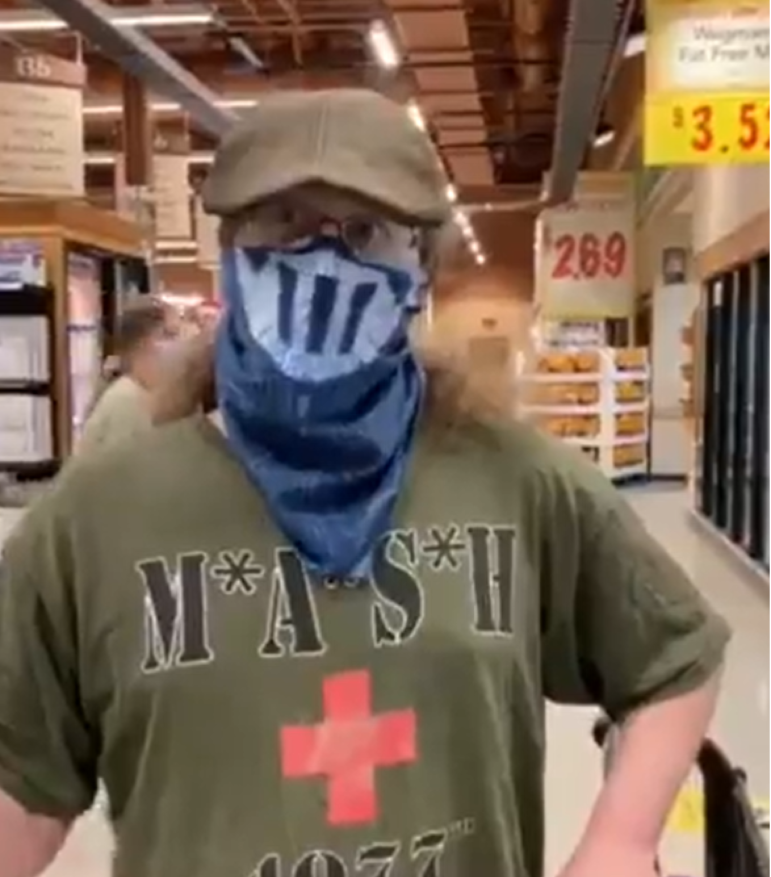 Police were called when a disagreement between two customers over the wearing of face masks escalated into an obscenity-laced tirade in the Wegmans store in Hanover Township, Northampton County, Sunday. Colonial Regional Police chief Roy Seiple said Thursday that no one was charged in the incident, which he characterized as a “civil dispute.” The man pictured above, however, said the other customer involved in the argument spat on him.

Editor’s Note: After speaking to the alleged victim in this case, we have updated this story for clarification and to include additional information.

Colonial Regional Police Chief Roy Seiple confirmed Thursday that no charges were filed following an incident that occurred at the Wegmans store in Hanover Township, Northampton County, on Sunday.

Seiple called the incident involving customers a “civil dispute” and claimed to have no knowledge of the allegation that one customer spat on another.

“Everybody declined to press charges and I don’t know anything about anybody spitting,” Seiple said. “It was a discussion…kind of a verbal altercation between two people regarding someone wearing a mask.”

posting on behalf of a friend who sent me this video from Wegmans in Bethlehem, PA. The taller man in a dark shirt was not wearing a mask when it’s store policy, called a POC staff member “a terrorist,” and spat on a man trying to intervene. #racist #YouAboutToLoseYoJob pic.twitter.com/5vQU7jVQe6

However, in a video recorded in the store as the incident unfolded and later shared on Twitter, the masked customer who was involved in the dispute said the man with whom he argued did in fact spit on him.

Saucon Source later spoke to that man–whose name we are withholding at his request–who confirmed that he was spat upon, and that he will consider pressing charges because he believes he was assaulted during the incident in the store.

The man said the incident began as he walked past another man in an aisle of the store.

As he did, he said he observed that the man was not wearing a face mask and muttered to himself about people who aren’t adhering to a state health department rule that requires face coverings to be worn inside stores. (Note: The mandate was expanded Wednesday.)

The other man overheard him, became incensed and then began to berate him, he said.

“During his little rant he started spitting,” he recalled Thursday. “He started purposely spitting on me.”

The harassment continued, he said, as store employees responded and attempted to de-escalate the situation.

In the video shared on Twitter, he recounted a similar tale. Speaking directly to the camera, he also made this statement about debates over the use of face masks:

This is to anybody watching this. … Wear your goddamn mask. Stop being stupid. You know, it’s a piece of cloth.

Just prior to that, stunned-looking shoppers who witnessed the unfolding incident can be heard in the video saying “call 911” as the man who was not wearing a mask unleashes a stream of profanity and calls someone who tried to intervene a “terrorist.”

The uploader of the video–a Twitter user with the name @_fallrisk–said in the accompanying post that the person who was called a “terrorist” is a Wegmans employee who is a “POC,” which is an abbreviation for “person of color.”

As the man without a mask becomes increasingly irate in the video, another employee can be heard telling him and another person “you go this way and you go this way,” in an effort to put an end to the commotion.

When it did finally end, the man who was not wearing a mask was surrounded by police outside the store, according to the other customer who was involved in the incident.

He said he told Wegmans staff that he wanted them to press charges, but was “ignored.”

He is also upset, he said, because he feels the store wasn’t enforcing its own face mask policy; a policy they are required to have by the state. He recalled that during his visit to Wegmans, he observed other customers who were shopping without wearing masks.

“Because they didn’t enforce that (requirement), my safety was put in jeopardy,” he said.

It is unclear whether the other shopper was ordered removed from the store, however Saucon Source has contacted Wegmans’ director of media relations for additional information. We will update this story with that information if it is made available to us.

Wegmans’ stated policy is that all customers must wear face coverings in their stores, although it indicates that customers may not be removed from them for failure to do so.

Under the Pennsylvania Department of Health’s COVID-19 order that applies to businesses, individuals who have claim a medical condition that prevents them from wearing one do not have to wear a face mask. No proof is required to be shown.

“Customers are required to wear a face covering while shopping in our stores in accordance with any local or state mandates,” according to Wegmans’ policy. “We are focused on complying with these mandates, while keeping the health and safety of our employees and customers a top priority, and that includes minimizing the likelihood of conflicts in our stores. Short of refusing entrance to our stores, we are doing everything we can to educate our customers of the mandate and stress the importance of voluntary compliance to keep themselves and everyone around them safe.”

On Wednesday, Pennsylvania governor Tom Wolf expanded the state’s requirement that customers and employees wear face masks inside businesses to include all public places.

State health officials, the Centers for Disease Control and other experts in the fields of infectious diseases and epidemiology continue to recommend the use of face coverings to help slow the spread of the novel coronavirus.