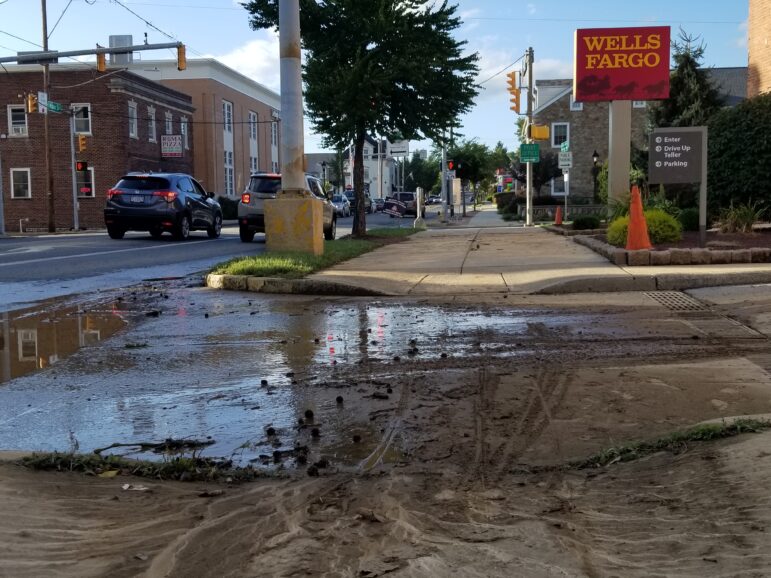 Mud and silt left behind by the Silver Creek–which flooded the 600 block of Main Street in Hellertown–was being cleaned up by residents Tuesday evening.

Saucon Valley waterways became raging rivers thanks to Tropical Storm Isaias, which dumped as much as seven inches on the area in just a few hours Tuesday.

Tragically, at least one person died in the flooding when her vehicle was swept away in Upper Saucon Township.

In Hellertown borough and Lower Saucon Township, some roads remained closed as of Tuesday evening, including Walnut Street between Front Street and the bridge. In that area, flood waters from the Saucon Creek combined with water from the grist mill pond to close the road and inundate the first floor of the historic mill.

Borough officials said that section of Walnut Street will remain closed overnight, with a bridge inspection to be held Wednesday morning.

The story was similar along Meadows Road near Rt. 412, where flood waters surrounded the historic 1858 bridge across the creek. The bridge has been closed due to structural deficiencies for several years, and although preservationists want it saved, its owner–Northampton County–has yet to finalize a plan for the iconic span.

Roads that had reopened as of Tuesday evening included Water Street (including the Water Street Bridge) in Hellertown and most of the roads that were earlier closed in Lower Saucon Township, including Alpine Drive, Apple Street and Lower Saucon Road. Sanbrook Drive just off Black River Road was also hard hit by flooding Tuesday.

In the flood-prone 600 block of Main Street in Hellertown, tenants and property owners participated in a cleanup effort that for some has become all-too-common over the years. Mud and silt deposited on roads and sidewalks in the area was rapidly being removed, erasing all traces of the flooding of the Silver Creek that took place earlier in the day.

At the Hellertown Pool–which is closed for the summer due to the COVID-19 pandemic–flooding or storm water runoff caused the pool’s liner to produce a bubble in one corner.

Tuesday’s flooding was the worst the area has seen since the remnants of Hurricane Irene inflicted a similar amount of destruction in late August 2011.

A large puddle and some mud were signs of the flooding that occurred earlier at the intersection of Polk Valley Road and Main Street (Rt. 412) on the border between Hellertown borough and Lower Saucon Township.

The flooding along Meadows Road was significant, however the section of road most affected by it is normally closed to all but local traffic; a consequence of the closure of the historic Meadows Road bridge, which is visible behind the barricades at the center of this photograph.

A small “pond” was formed by storm water runoff along Rt. 412 near Meadows Road in Lower Saucon Township.

The floodwaters of the Saucon Creek along Meadows Road were visible from nearby Rt. 412.

The Saucon Creek flooded part of the parking lot at the American Family thrift shop in Lower Saucon Township. 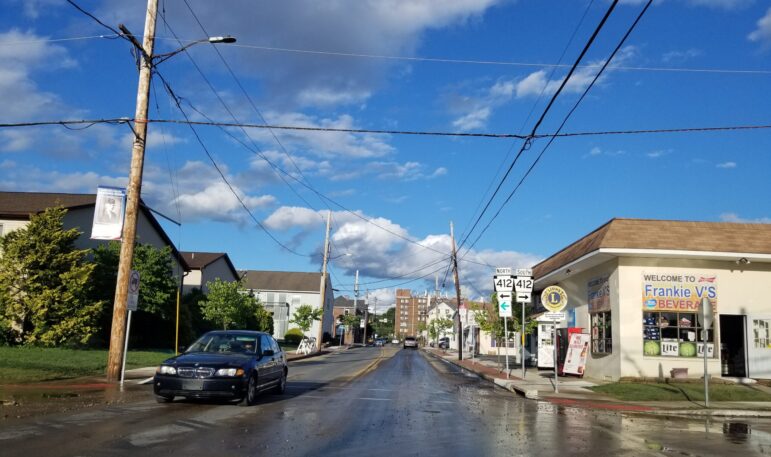 Water Street in Hellertown briefly became a raging river when the Silver Creek flooded Tuesday. However, by late in the day, the road was passable and the nearby Water Street Bridge–which spans the Saucon Creek–had reopened to traffic.

Floodwaters from the Saucon Creek surround the historic Heller-Wagner Grist Mill in Hellertown Tuesday evening. The creek overflowed its banks to mingle with the water from the grist mill pond and create a kind of lake that flowed across Walnut Street, drawing onlookers and amateur photographers. Walnut Street remains closed and the nearby bridge will be inspected Wednesday, according to borough officials. The grist mill is owned by the borough and maintained by volunteers. 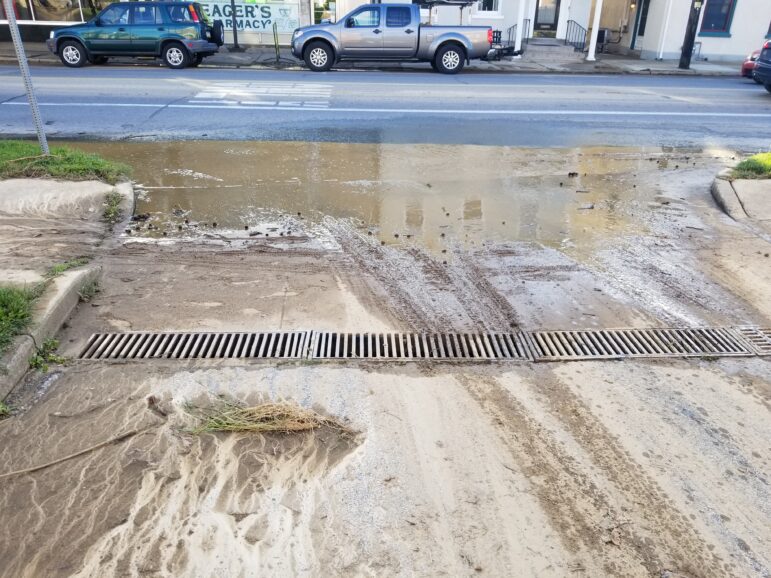 A muddy mess was what Tropical Storm Isaias’ floodwaters left in the 600 block of Main Street in Hellertown Tuesday. Pictured on the opposite side of the street are Yeager’s Pharmacy and the building that houses Saucon Source’s offices. 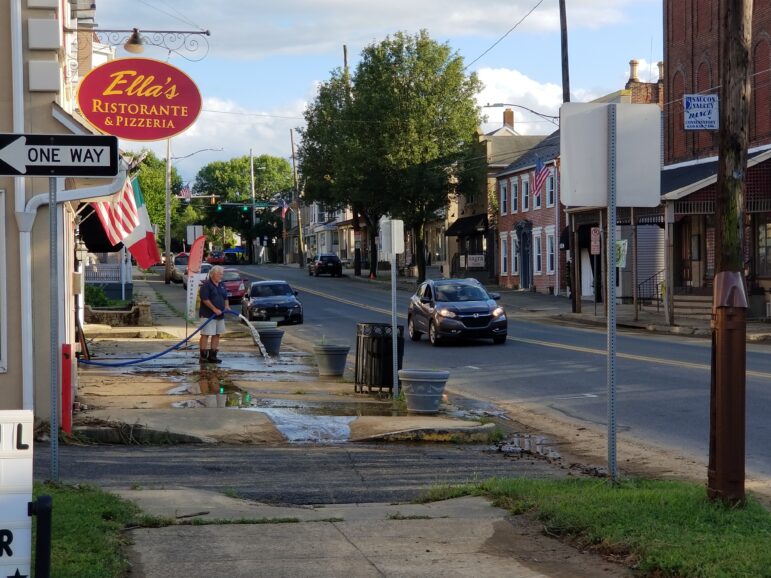 The cleanup continued in front of Ella’s Ristorante &  Pizzeria in the 600 block of Main Street in Hellertown Tuesday night. The Silver Creek–which is diverted under several of the block’s buildings–overflowed after nearly seven inches of rain fell in just a few hours, leaving behind tons of mud and silt. 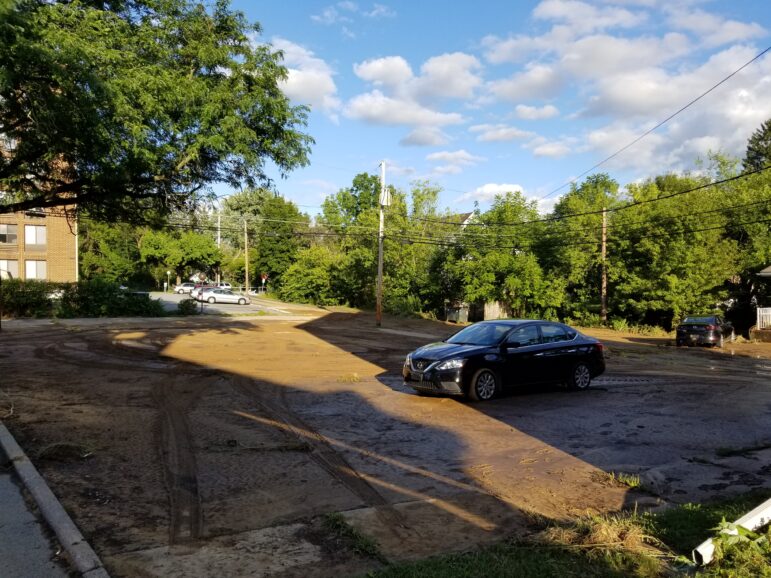 The parking lot behind St. Paul United Methodist Church in Hellertown borough looked more like a mud bowl after the floodwaters of the Silver Creek receded. 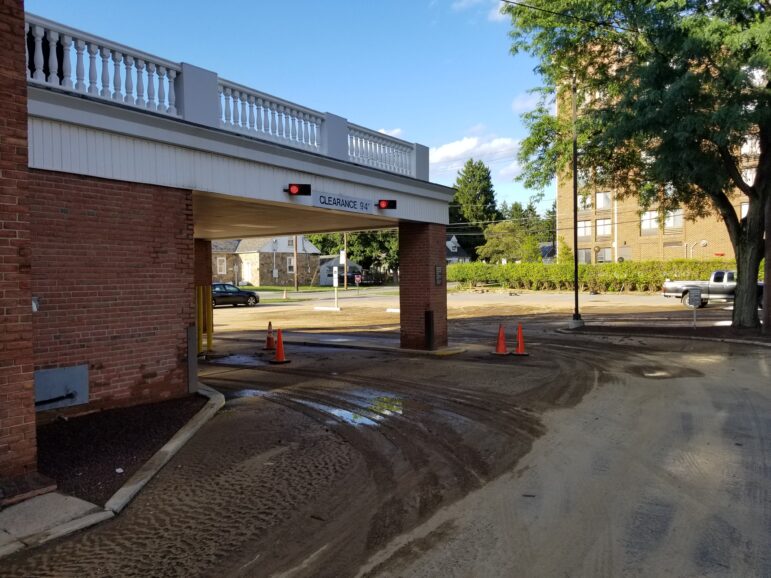 Visitors to the Wells Fargo Bank branch at Main and Water streets in Hellertown found its drive-thru closed and barricaded with orange safety cones Tuesday. 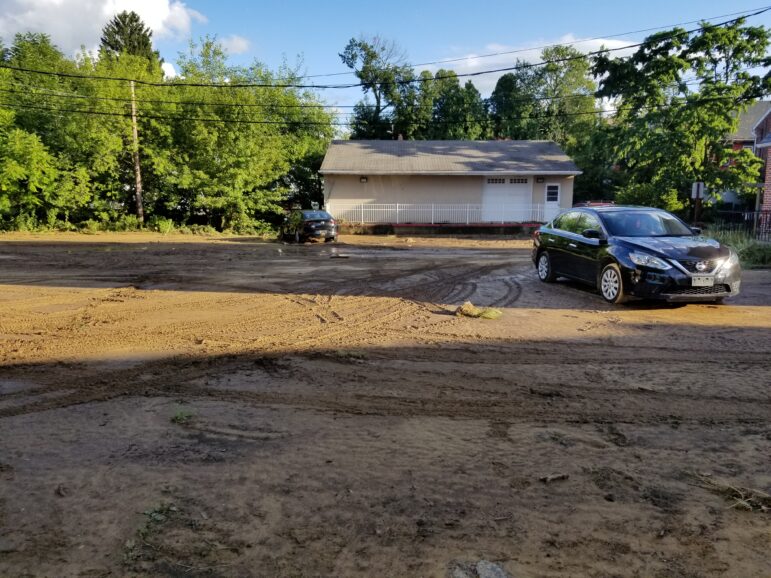 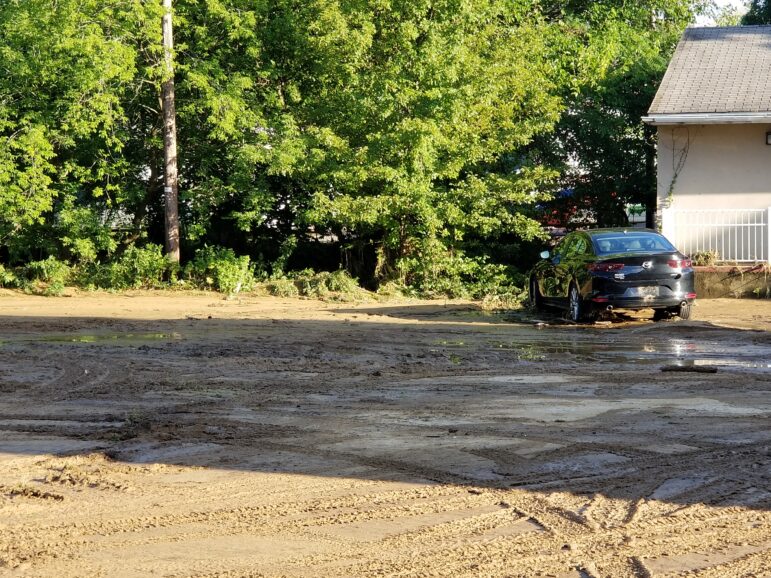 Any vehicles that were left in the lots along the Silver Creek Tuesday may have sustained damage due to flooding that occurred when the creek overflowed. 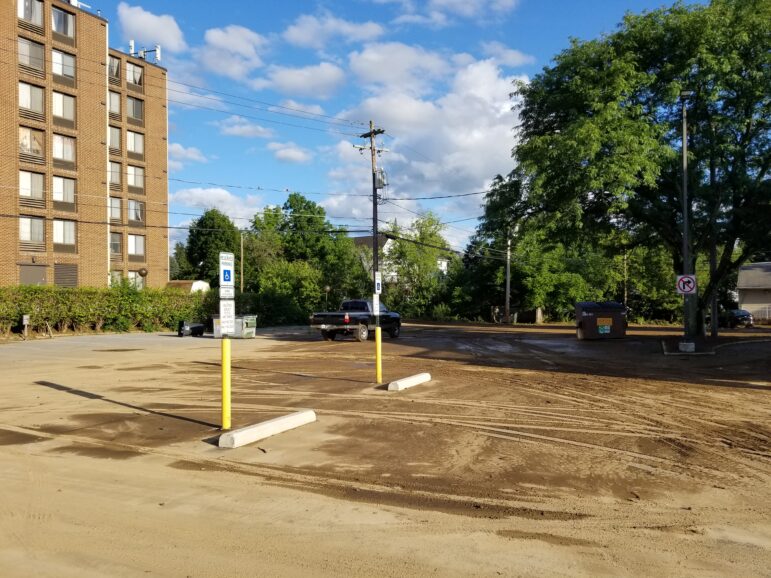 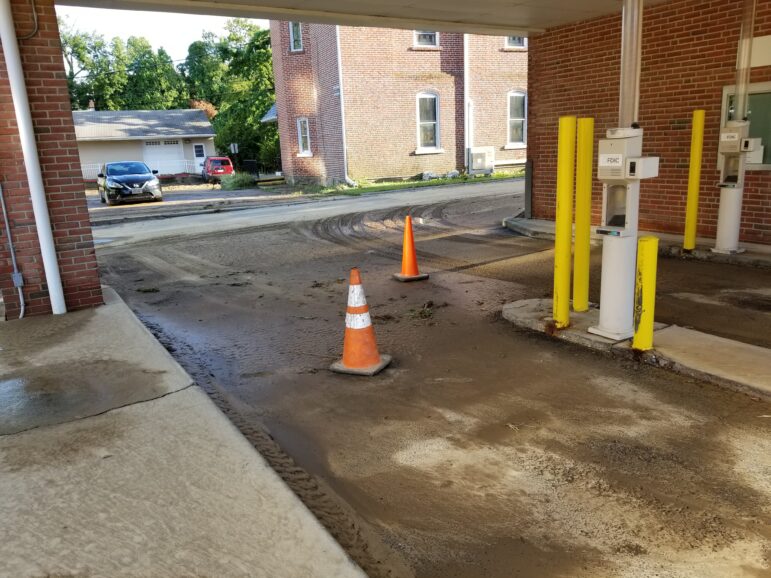 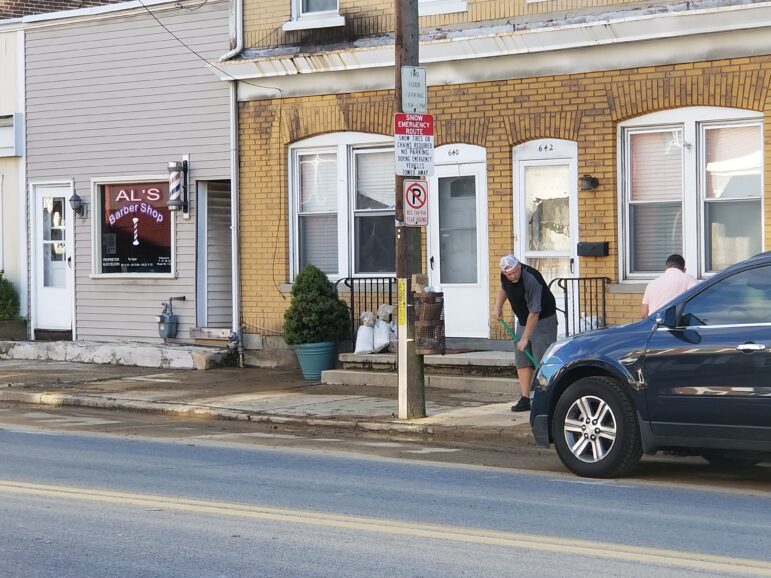 Residents swept and hauled mud away in the 600 block of Main Street in Hellertown borough Tuesday. Although the block is known to be flood-prone–as part of it is built atop the Silver Creek–it had been a number of years since it was so severely flooded. 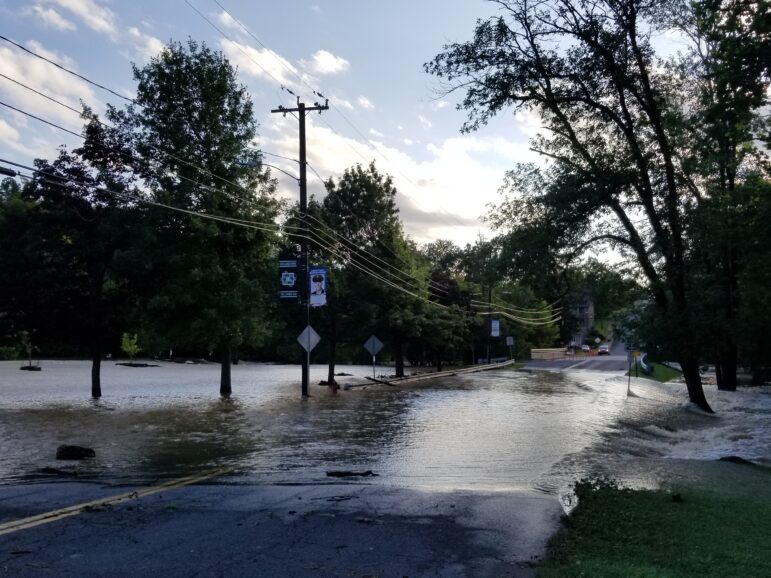 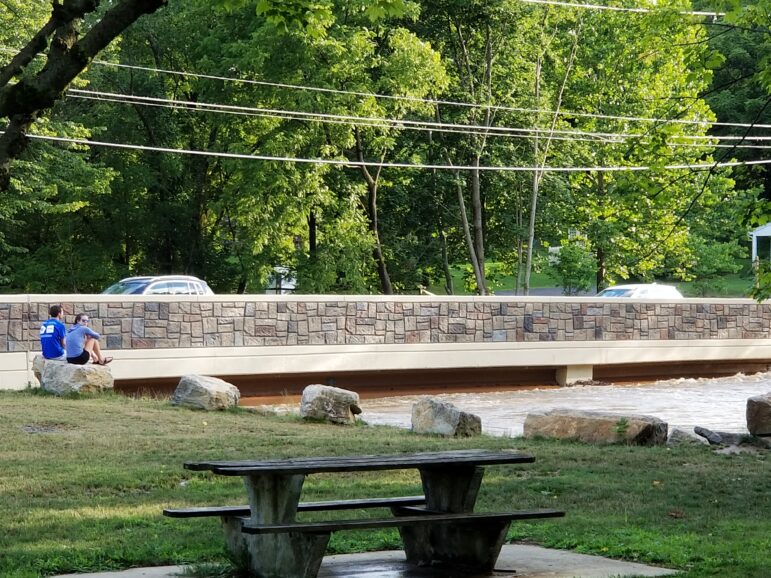 The crest of the Saucon Creek at around dinnertime was just below the deck of the “new” Water Street Bridge in Hellertown. The bridge was completed last September, and replaced a 1938 span that may not have withstood Tuesday’s serious flooding. 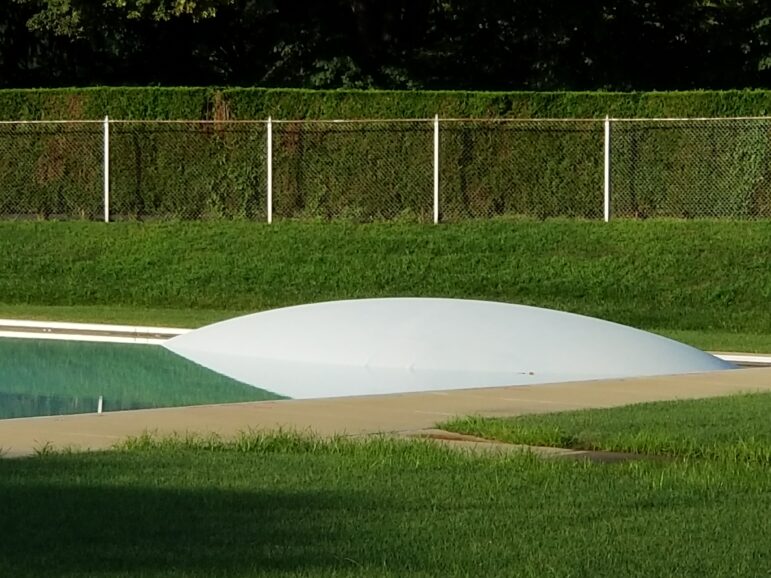 A pocket in the liner of the Hellertown Pool formed Tuesday during torrential rains that triggered flooding in the area. 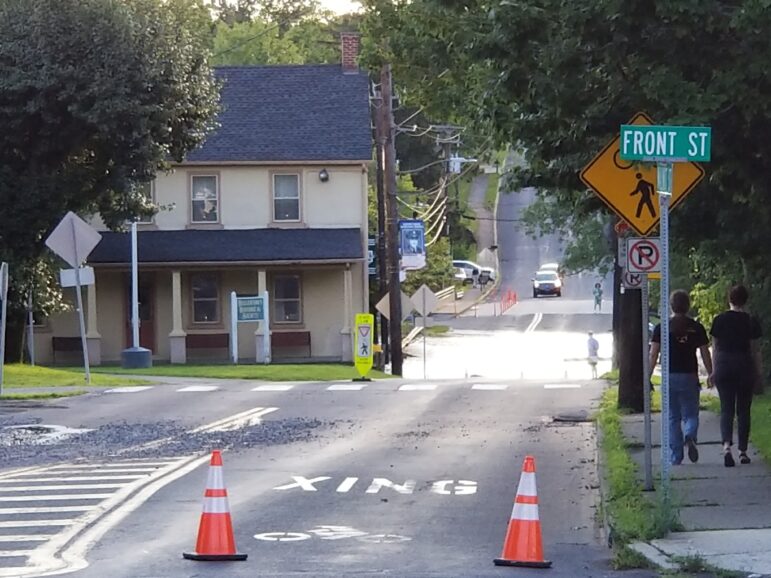 A number of residents walked down to look at and photograph the Saucon Creek where it had overflowed and closed Walnut Street in Hellertown Tuesday. 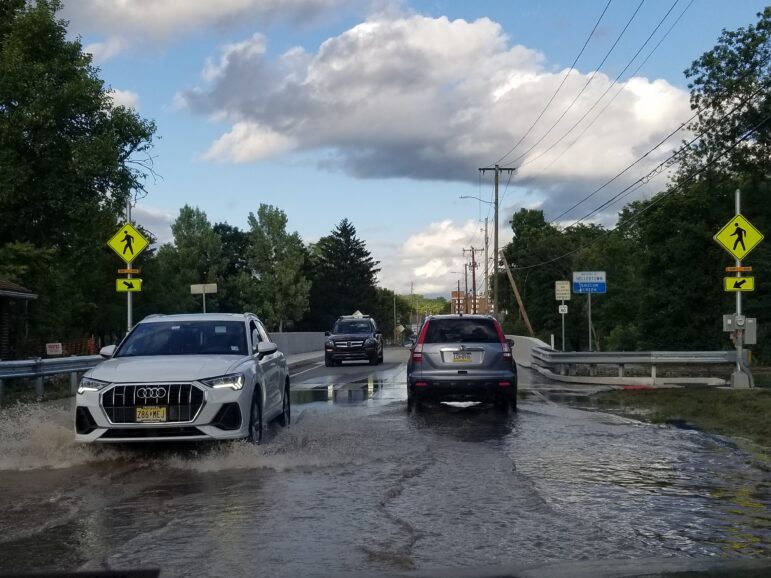 Although it was closed earlier in the day, the Water Street Bridge had reopened to traffic by around 6:30 p.m. Tuesday. Flooding was moderate to severe along Water Street on the Hellertown borough side of the bridge, and along Creek Road on the opposite side, which is located in the City of Bethlehem. 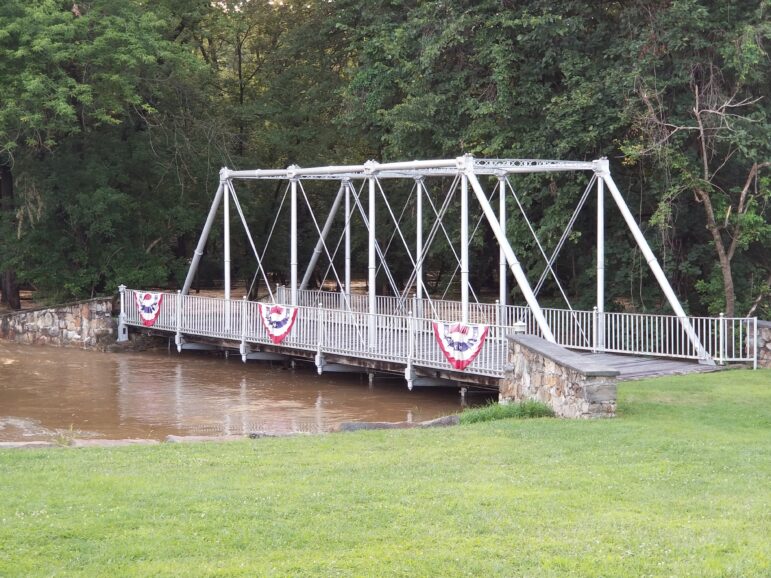 The normally landlocked “Pony Bridge” along Water Street was able to function as an actual bridge after floodwaters from the Saucon Creek filled the culvert underneath it Tuesday. The historic metal truss bridge is maintained–along with the nearby Heller-Wagner Grist Mill–by volunteers from the Hellertown Historical Society. 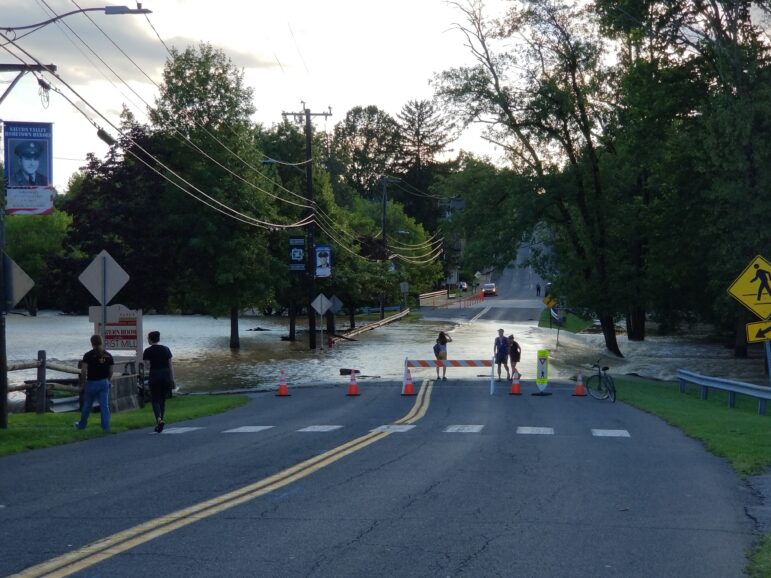 The sight of Walnut Street flooded was a draw for many in the Hellertown area, who ventured beyond temporary barricades to safely gaze at the floodwaters. 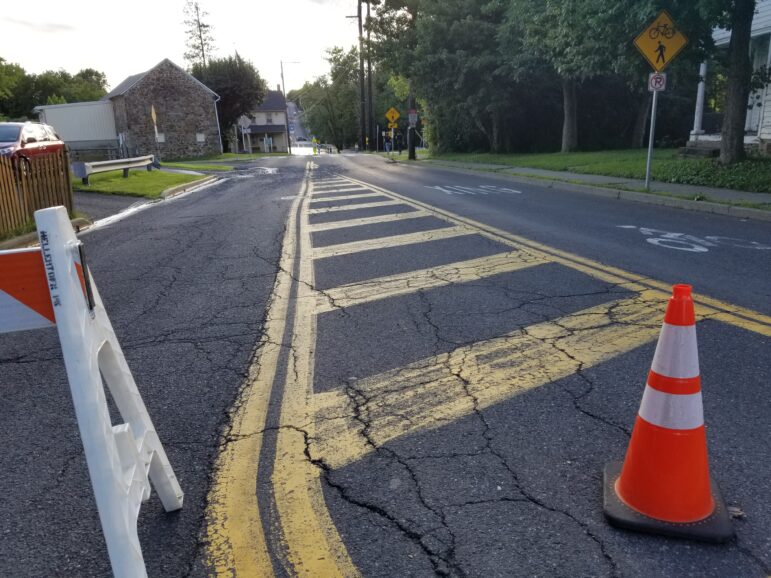 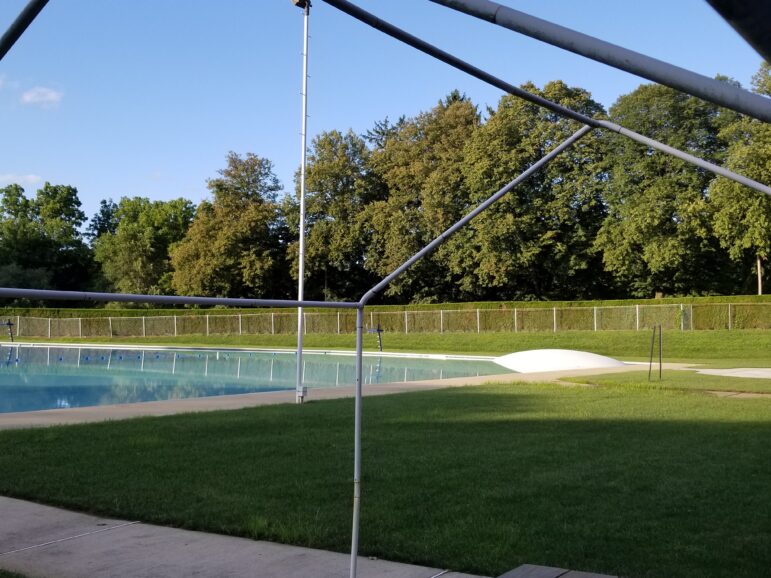