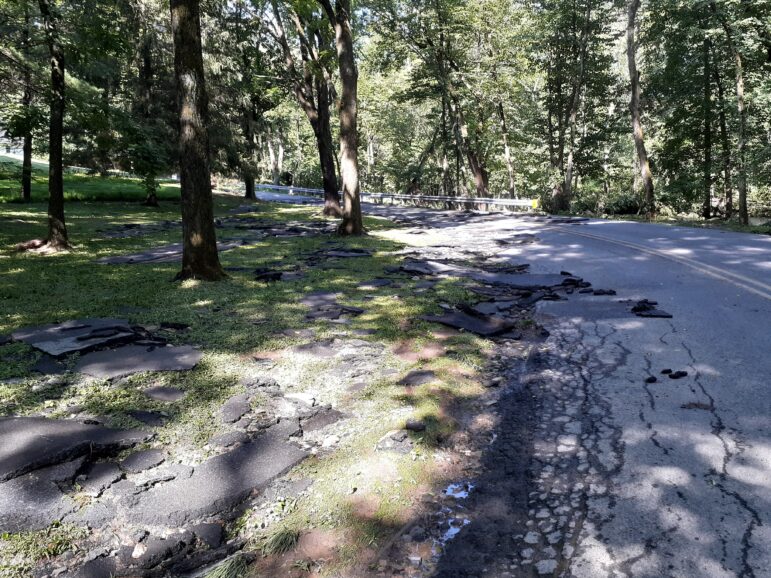 Flooding caused by Tropical Storm Isaias damaged the pavement on a low-lying section of Reading Drive in Lower Saucon Township Tuesday. The road remains closed between Creekview and Bingen roads because of the damage.

UPDATE: As of Thursday, Aug. 6 both Fire Lane and Reading Drive had reopened to traffic, per Lower Saucon Township officials.

Part of Reading Drive in Lower Saucon Township looks more like an earthquake struck the area than a flood, but the damage was actually inflicted by water. A lot of water.

When the Saucon Creek overspilled its banks Tuesday, the torrent of floodwater that washed across the road was powerful enough to strip away entire sections of asphalt, which is why it remained closed to traffic between Creekview and Bingen roads as of late Wednesday afternoon.

Video recorded by local resident Rich Hawk (below) shows just how powerful the flash flooding was.

The flooding resulted from nearly seven inches of rain, which fell in just a few hours thanks to Tropical Storm Isaias.

Other township roads that took a serious beating from flooding related to Isaias are Riverside Drive in Steel City and Sanbrook Drive, where the Black River–normally a trickle–briefly became an actual river. 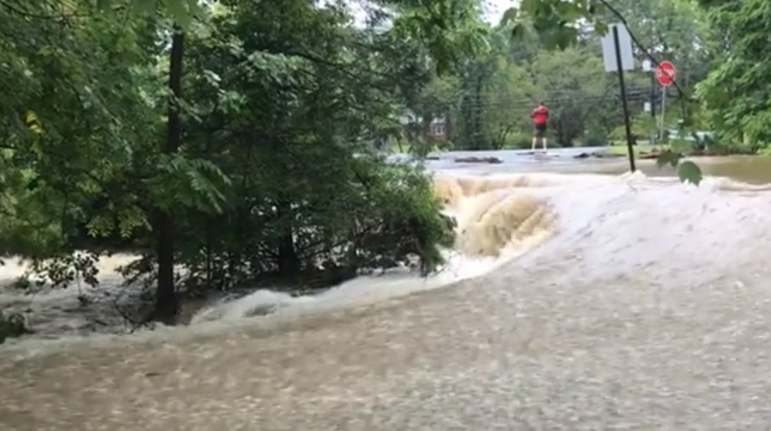 A screenshot from a video recorded by a resident early Tuesday afternoon shows the amount of floodwater that inundated Sanbrook Drive where it intersects with Black River Road. There was significant damage to the road and culvert under it.

Fire Lane is closed along its entire length, which runs from Black River Road in Lower Saucon Township to Seidersville Road in Salisbury Township, as a result of a down tree and fallen wires.

Township officials put out a call to residents to inspect their homes and report any rain or wind damage their properties sustained as a result of Isaias to township manager Leslie Huhn (email: manager@lowersaucontownship.org).

The reports will be shared with Northampton County Emergency Management Services for inclusion in any reports that are filed seeking disaster aid.

“These documented damages can go a long way with helping to obtain potential disaster declaration monies to help repair/rebuild your damaged home or business,” a document from NCEMS states.

One piece of good news Wednesday was the announcement that Walnut Street had reopened following flooding that closed it in the area of the grist mill.

As of 8 a.m. Wednesday, all roads and bridges had reopened in the borough.

Cleanup, however, was a different story. That continued in Lower Saucon Township and in Hellertown borough, where many basements filled with water and parking lots were left covered in mud.

The flooding from Isaias was also severe in surrounding communities, including Upper Saucon Township, where a 44-year-old woman died when her vehicle was swept away in the 6300 block of North Main Street.

On Wednesday Lehigh Valley Live reported that the Lehigh County Coroner had identified the woman as Yesenia Then of Allentown.

An autopsy to determine Then’s cause of death is scheduled for Thursday, it was also reported. 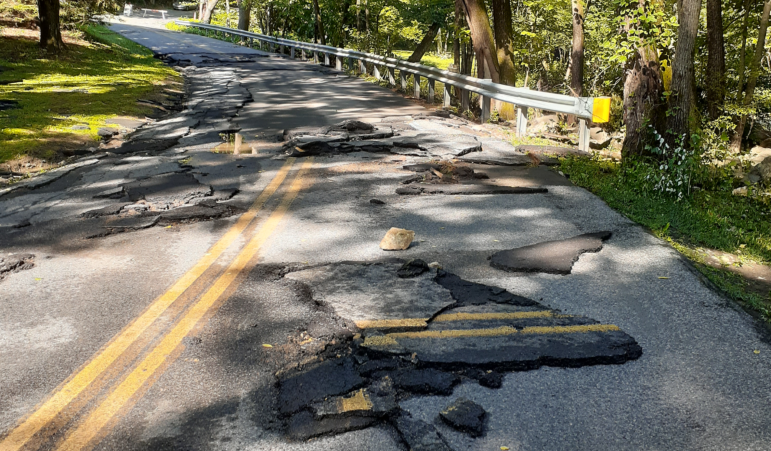 The force of the floodwaters that submerged Reading Drive was enough to destroy the asphalt on it. Running parallel to Saucon Creek, the section of road that was damaged is known to be flood-prone. 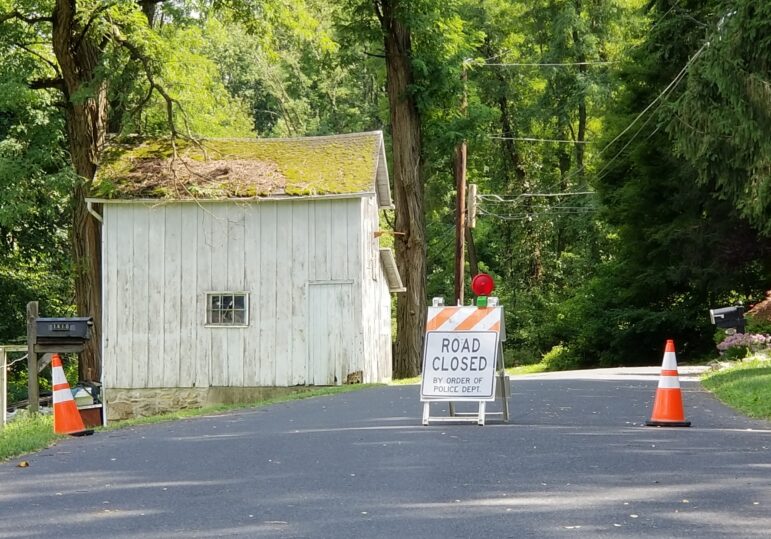 Fire Lane remained closed in Lower Saucon and Salisbury townships late Wednesday because of a down tree and fallen wires. The road is closed along its entire length, between Black River and Seidersville roads.