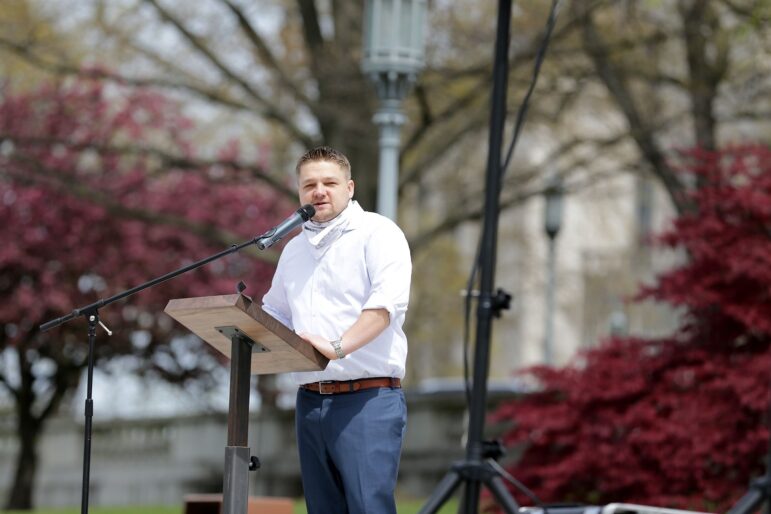 State Rep. Aaron Bernstine–seen here at a Reopen PA rally outside the Pennsylvania State Capitol in April–apologized for social media videos in which he said he made “jokes that went too far.” The Republican state representative from Lawrence County in western Pennsylvania has so far ignored calls for his resignation, including some from within his own party.

HARRISBURG — House Republican leaders are calling on a member of their caucus to resign after videos of the Lawrence County lawmaker encouraging his young son to smoke and curse emerged this week.

In since-deleted social media posts obtained by USA Today’s PA State Capitol Bureau, Rep. Aaron Bernstine is heard urging his five-year-old son to smoke a cigar, telling him to “hit it harder, breathe in.” Videos also show Bernstine encouraging his son to use a vulgar word for vagina and asking another child to play a game known in polite circles as “Kiss, Marry, Kill.”

House GOP leaders, including Speaker Bryan Cutler and Majority Leader Kerry Benninghoff, said in a joint statement Thursday that they were “disgusted.”

“In order to take the time necessary to focus on his family and repair his relationships, we call on Rep. Bernstine to immediately resign,” the leaders said in a statement.

Bernstine did not respond to a request for comment, but in a video posted to his campaign Facebook page he apologized for “jokes that went too far” during a family vacation and said he needs to “do a much better job as a role model for my child.” He did not address calls for his resignation–which have also been made by Democratic officials–but asked viewers for their support this November.

“Now, over the next 26 days before the election, there’s gonna be a lot of other things that people try to put out, some of them true, some of them manipulated and some of them just downright false,” Bernstine said. “The party bosses of both sides are going to try to take advantage of the situation.”