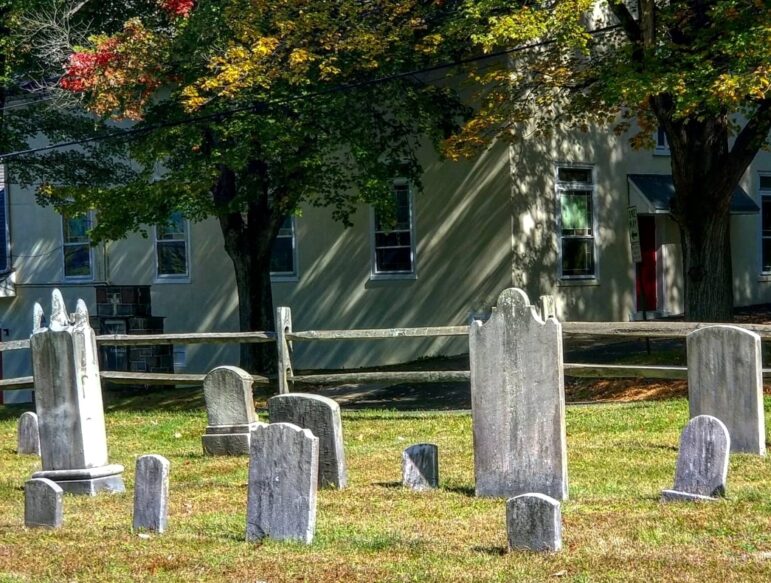 The oldest legible gravestone in Morgenland Cemetery dates from 1769, which was not long before Tambour Yokel would have returned home from the Revolutionary War. The present Jerusalem Evangelical Lutheran Church, pictured in the background, was built in 1847. After an earlier wooden structure was removed, for decades there was no church building on the site.

In the small, unassuming graveyard of Jerusalem Evangelical Lutheran Church in eastern Salisbury Township lie the remains of the deceased from the past two centuries…and the site of a tale of terror and mystery that dates back to the Revolutionary War.

The tale is immortalized in the 1800’s folk ballad “The Legend of Tambour Yokel,” by Rev. Dr. Joseph Henry Dubbs.

“Tell the story with bated breath

A story of horror and gloom and death,

A little church on a lonely hill,

A churchyard near it, calm and still

Fair in the morning’s early light,

Dark and gloomy it seems at night

There it is said, in the olden time,

Happened a nameless deed of crime…”

The story begins at a local tavern, whose name and location are now lost to time. A local man, whose real name is also lost to time, but who was called Tambour Yokel in Dubbs’ ballad, had just returned home from the war. He had joined the army reluctantly to escape the humiliation of a beating he got from another local man named John, after insulting John’s wife.

Tambour had been a drummer in the war, and rumor had it that he had sold his soul to the devil in order to survive so he could come back home and give John the beating he owed him in retaliation.

Tambour showed up at the tavern, still wearing his muddy and tattered uniform with his drum around his neck, and apparently already fairly drunk. He ordered a drink and began shouting that he was looking for the coward John. “Is he too afraid of me to show his face? Where is he? I owe him a good beating and I aim to give it to him tonight!” All the men went quiet and the atmosphere became uncomfortable until the bartender quietly told Tambour that John wasn’t there because he’d been killed in the war. He was buried up the road at the cemetery.

You’d think Tambour would have let things go at this point, but he didn’t. Tambour claimed that he was still going to give John that beating he owed him, and he would march up to the cemetery and raise John from the dead to do so. He left and began heading to the cemetery, with the men from the tavern following behind. They were not about to miss this!

When they arrived, Tambour jumped onto the stone wall surrounding the cemetery, put his lantern down on it and began beating his drum, chanting and calling for John to come out, all very loudly. In his drunken state, he lost his balance and tumbled off the wall into the graveyard.

The men outside the wall began hearing screams. Blood-curdling screams of terror and agony. The screams became less and less, turning into whimpers until there was silence. No one dared to go inside the cemetery to see what had happened. They all scattered and came back the next morning in the daylight. 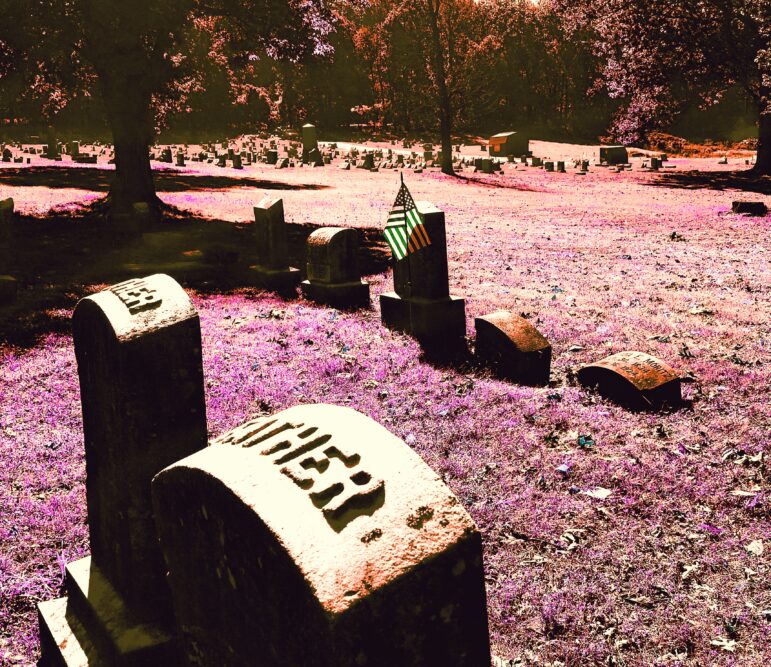 According to the legend, blood-curdling screams were heard from inside the cemetery after Tambour Yokel fell off its stone wall as he attempted to raise his mortal nemesis from the dead.

There are two versions of what they saw, but both describe a terrible scene of carnage. In both versions, the ground was torn up as if a great battle had taken place and there were both footprints and hoof prints on the ground. In one version the naked and torn up body of Tambour was found; so torn up that some shreds of his skin and insides were hanging from the trees. The other version claims that Tambour’s body was nowhere in sight, but there was so much blood found there was no way he could have survived. His clothes were shredded and scattered, some hanging in the trees. It was thought that the devil had come to the cemetery that night to claim the soul of Tambour Yokel.

This tale has been passed down for centuries and it was known that people would go miles out of their way to avoid passing that cemetery at night. The tale has become ingrained as part of the church’s history, and interestingly between the years 1791 and 1847, after the original 1759 log structure had become dilapidated, no church stood on that site.

The cemetery is known as the Morgenland Cemetery and it is located at 1707 Church Road, Allentown. The oldest legible stone is dated 1769. There is now a wooden fence around the cemetery and you’re welcome to walk the grounds respectfully.

Click here to listen to Ellen tell this tale on Saucon Source’s No Rain Date podcast, along with several others, or download it on iTunes, Spotify and other podcast listening apps.

Ellen Flynn is a writer and amateur historian of haunted places, which she has explored via her Facebook page, Creepy Lehigh Valley. With her husband Tom, she co-owns The Art Establishment, a community art studio and gallery in Fountain Hill. Read more about Ellen’s haunted Lehigh Valley explorations here.