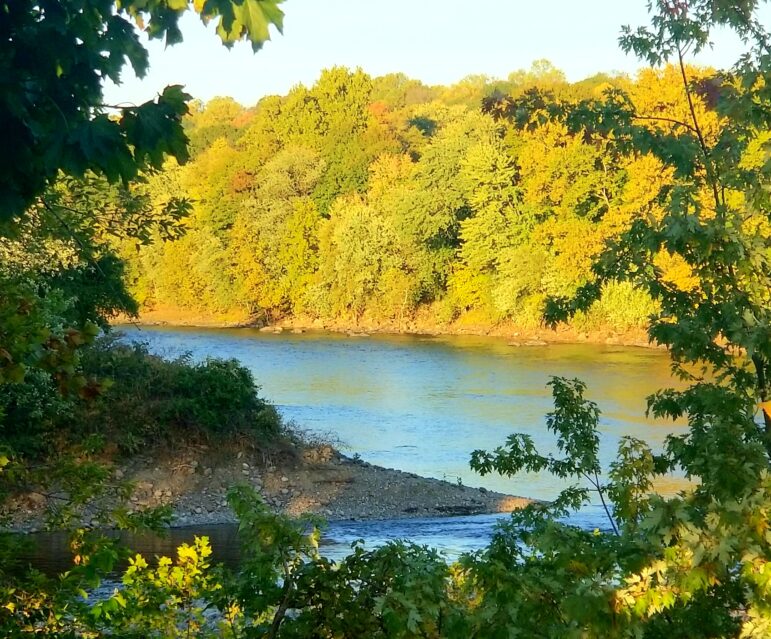 The southern tip of Getters Island appears through trees along the riverbank in Easton, just north of where the Bushkill Creek enters the Delaware River. As of Oct. 18, 2020 the six-acre island was listed for sale for $150,000.

Getters Island, also called Hangman’s Island, is a small island on the Delaware River in Easton, just north of where the Bushkill Creek enters the river, and it has a gruesome historical association.

In 1833, Margaret (also referred to as Rebecca) Lawall, pregnant at the time, named Charles Getter as the father of her child. He was brought before a local Justice of the Peace, and to avoid being sent to county jail he married her, but repeatedly said he did not care for her and did not want to. Getter was in love with another woman, Mary Hummer, who did not yet know about Rebecca or the marriage. The day after his wedding to Margaret, Getter inquired about whether he could get a divorce and was told he could not. He told several people that “he would have Mary Hummer, if he had to walk over pins to get her.” To one person, he reportedly said that he would “be clear of his wife in less than three weeks,” to another that he would “be rid of her in one week” and to yet another that he “wished that she was dead.”

Not long after that, Margaret was found murdered and suspicion immediately fell upon her new husband, Charles Getter.

According to an article in the Gettysburg-Adams Sentinel on Sept. 16, 1833:

“Rebecca Lawall had been married about ten days to the prisoner, when she was found dead some hundred yards from her residence; her body was discovered in a field a few rods from the public road, lying on the back, the comb crushed to pieces, hair disheveled, eyes and tongue partially protruded, face livid and the indentation of the thumb of a right hand in the throat, and of the fingers of a right hand in the back of the neck.”

Following his trial a jury took only 10 minutes to find Getter guilty, and he was sentenced to hang. 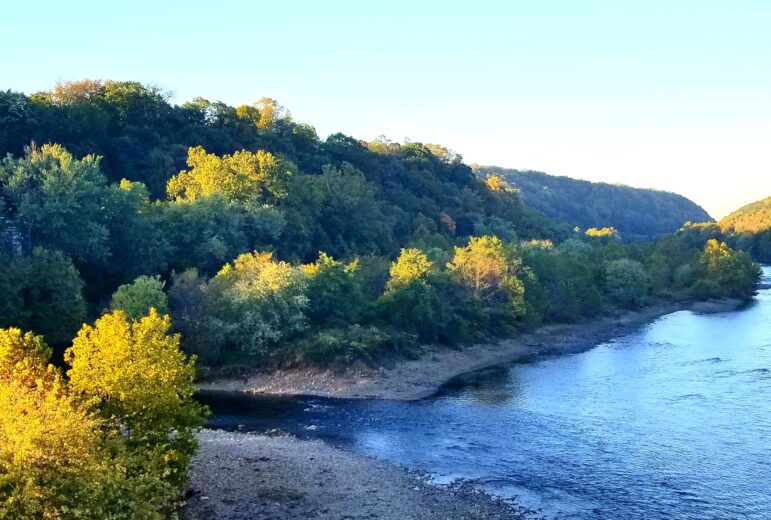 Getters Island is a six-acre vacant island in the Delaware River in Easton. It is named after Charles Getter, a murderer who was notoriously hanged on it in front of thousands of onlookers in October 1833.

According to an article in the Easton Sentinel, dated Oct. 11, 1833, the hanging attracted tens of thousands of people. The gallows was built in the center of a small island in the Delaware River so the hanging could be seen from the surrounding hills and banks. The condemned was to be jerked from the ground using a system of weights and pulleys rather than being dropped through a door from a platform, a quicker and more “humane” form of hanging.

Getter asked to walk rather than ride the half-mile from the Easton jail to the island. The rope broke on the first attempt to hang him and he fell to the ground, stunned, and said “that was good for nothing.” He had to wait 20 minutes for the second attempt, which was successful after he struggled for a short time on the end of the rope. A portion of one of the ropes is preserved at the Northampton County Historical & Genealogical Society in Easton.

The ghost of Margaret Lawall wearing a long black dress and black bonnet has been seen walking the grounds of the Northampton Country Club, which was built over the old limestone quarry where her body was found. There is an entry for her under the name “Rebecca Getter” on the website FindAGrave.com, but it isn’t clear if Lawall is buried in Dryland Reformed Cemetery in Lower Nazareth Township or simply memorialized there.

The ghost of Charles Getter has been seen walking the island named for him, where the life was slowly choked from him.

Click here to listen to Ellen tell this tale on Saucon Source’s No Rain Date podcast, along with several others, or download it on iTunes, Spotify and other podcast listening apps.

Ellen Flynn is a writer and amateur historian of haunted places, which she has explored via her Facebook page, Creepy Lehigh Valley. With her husband Tom, she co-owns The Art Establishment, a community art studio and gallery in Fountain Hill. Click here to read more of Ellen’s stories on Saucon Source.