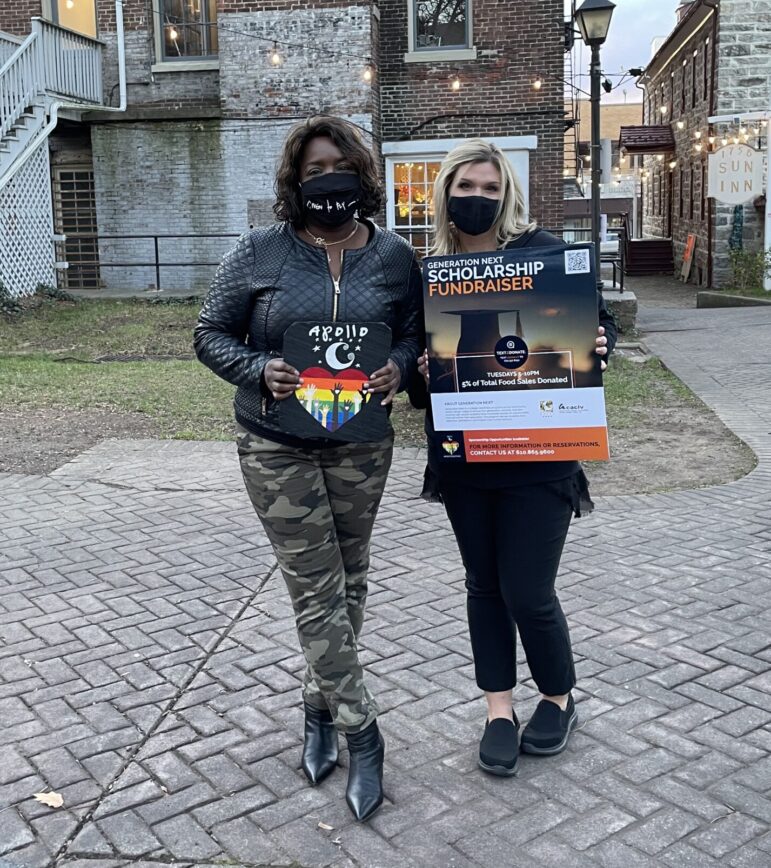 Rachel Griffith (right), owner of the Apollo Grill in Bethlehem, and Hasanna Birdsong of the Community Action Coalition of the Lehigh Valley teamed up to help establish a scholarship fund for students benefitting from the Generation Next program. In just over two months, the Apollo Grill raised $50,000, or double the amount they set out to raise.

The Apollo Grill in Bethlehem spent the afternoon of Tuesday, Nov. 17 celebrating a $50,000 contribution the restaurant made to a scholarship fund benefiting Community Action Committee of the Lehigh Valley’s (CACLV) Generation Next program.

Generation Next is a college readiness program designed to help underserved high school students achieve college admission, integrate into college life and obtain a degree. It was started by CACLV five years ago in partnership with Dr. Sarah Wascura, a French teacher at Easton Area High School.

The program has since grown to serve students in four different high schools across three school districts, where it helped more than 200 students last year.

For Rachel Griffith, owner of the Apollo Grill, helping correct disparities in educational opportunities is an issue she holds dear. When she heard about CACLV’s Generation Next program, Griffith said she knew there would be an opportunity for the two organizations to team up and work towards a common goal.

“The Apollo Grill, like many restaurants, cultivates a diverse workplace,” Griffith said. “We embrace each other. It doesn’t matter the color of your skin, who you love or what you identify as.”

The partnership between Griffith and the CACLV resulted in the establishment of Apollo Grill’s Generation Next Scholarship Fund. In just over two months, the restaurant doubled its goal of raising $25,000.

Thrilled with their success, Griffith announced Tuesday afternoon that their new goal is to raise $100,000 for the fund.

“The Apollo Grill is a safe place,” Griffith said. “With this scholarship fund, we’re hoping that we can make others realize that there are so many other safe places to be.”

The funds will be put towards scholarships for graduating seniors who plan on attending college, as well as emergency funds for students experiencing life-altering situations, supply funds for textbooks and essential items, and funds to support college visits.

The Apollo Grill continues to contribute to the fund each Tuesday night as they donate five percent of food sales from 5 to 10 p.m. Patrons may also make donations.

“Given the challenges our community faces, it’s extraordinarily impressive that the Apollo Grill and its customers rallied behind this scholarship fund, even exceeding their goal,” said Kumari Ghafoor-Davis, Director of CACLV’s Campaign for Racial and Ethnic Justice, which oversees Generation Next. “These funds help us level the playing field for our Generation Next students by reducing the financial barriers that these phenomenal students are met with once they begin their college careers.” 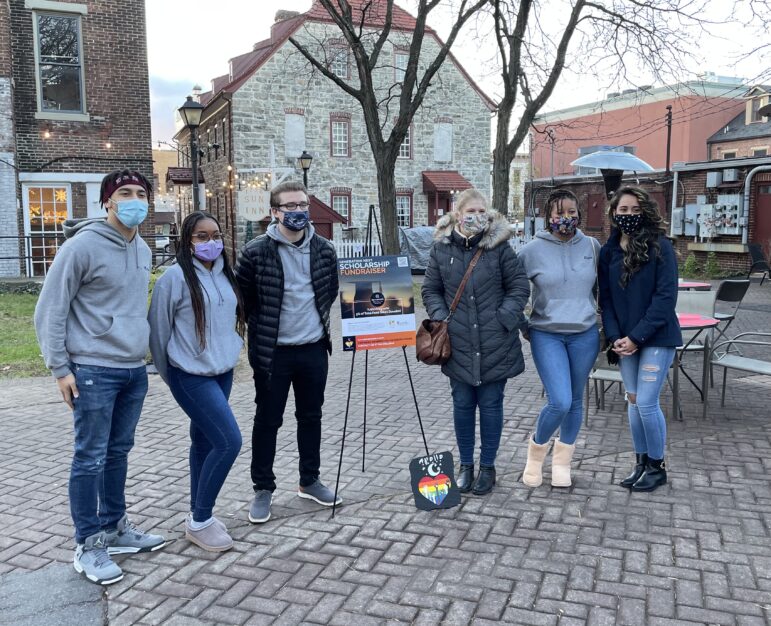 Six students who have benefitted from Generation Next services were in attendance at Tuesday’s event. From left to right they are Martin Washington, Fayola Georges, Michael Jaruga, Kamilla Jaruga, Brieuana White and Mariah Olmo.

Martin Washington, a current sophomore at Morehouse College in Atlanta, has benefitted from Generation Next services and spoke about that at Tuesday’s event.

He thanked the program for helping him navigate the financial aid process and making it possible for him to attend an out-of-state school.

“I was working with them for like three hours one day on financial aid; I was messing things up,” Washington joked. “Without them, I don’t know what I would have done.”

Kamilla Jaruga is a junior at the University of Vermont. She said that Generation Next helped her devise a plan to apply for and attend college.

“They helped me every step of the way,” she said. “Through the financial aid process, through how to talk to an admissions counselor, because I didn’t know how to do that.”

Michael Jaruga, Fayola Georges, Brieuana White and Mariah Olmo are other students who were in attendance who have worked with Generation Next.

To learn more about the CACLV and ways to contribute to their programs, visit their website.