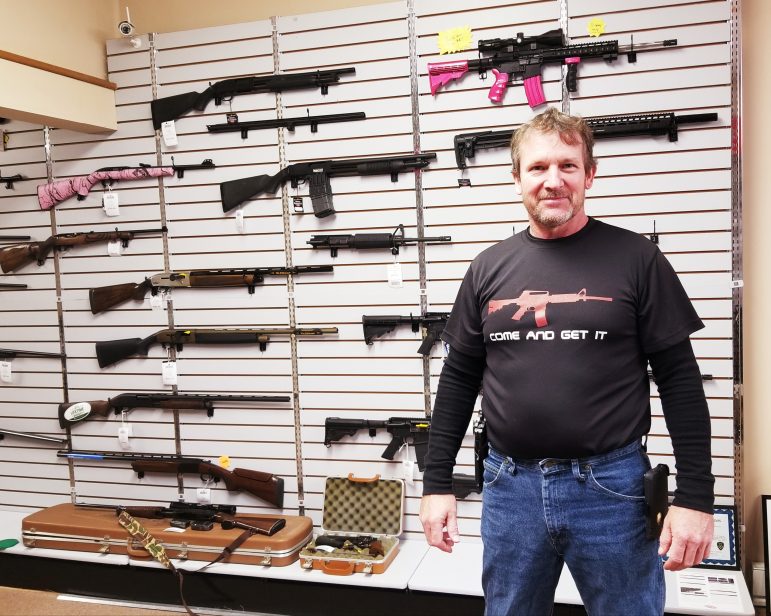 Lloyd Tactical owner Bryan Lloyd stands inside his gun shop on Friedensville Road in Lower Saucon Township in this file photo. In August 2019, Lloyd moved his business to a more prominent location on Main Street in Hellertown borough. The store closed permanently on Dec. 31, with Lloyd citing an ongoing nationwide gun and ammunition shortage as the reason.

A Hellertown gun shop has gone out of business.

Lloyd Tactical opened at 766 Main Street in the summer of 2019, after relocating from a rented space in the Society Hill Plaza on Friedensville Road in Lower Saucon Township.

In a Facebook post last week, owners Bryan and Beth Lloyd said the decision to close the store was made because of a lack of inventory.

Gun sales have been at record levels since last year, when the coronavirus pandemic and the presidential election pushed them higher than ever before, creating a nationwide gun and ammunition shortage.

As a result of the supply chain issues, Lloyd Tactical initially closed its doors temporarily in November.

“As product availability is still extremely limited, we have decided to cut our losses and move on,” the Lloyds said in their Dec. 31 Facebook update. “We would like to sincerely thank all of our customers who have helped us along the way. We’ve made some good friends over the last few years and will forever be grateful.”

The closure leaves the Saucon Valley without a gun store. Prior to Lloyd Tactical’s opening, a firearm retailer was often near the top of the list of most-requested businesses by local residents.

The business maintained a perfect 5-star review rating on Google and many customers expressed sadness over the news that Lloyd Tactical would be closing on Facebook.

“Very sorry to hear this,” commented one customer. “Bryan is a great source of knowledge and an excellent gentleman to talk to.”

The business closure is the second in downtown Hellertown in as many months.

Off The Trail, a cafe that opened last summer, closed permanently in November.

Allison Guido, who operated the cafe, also owns The Brow Society in Hellertown.

A Nazareth-based smoothie business, Fuze Nutrition, is expected to open their second location in the space Off The Trail had occupied sometime in the near future.