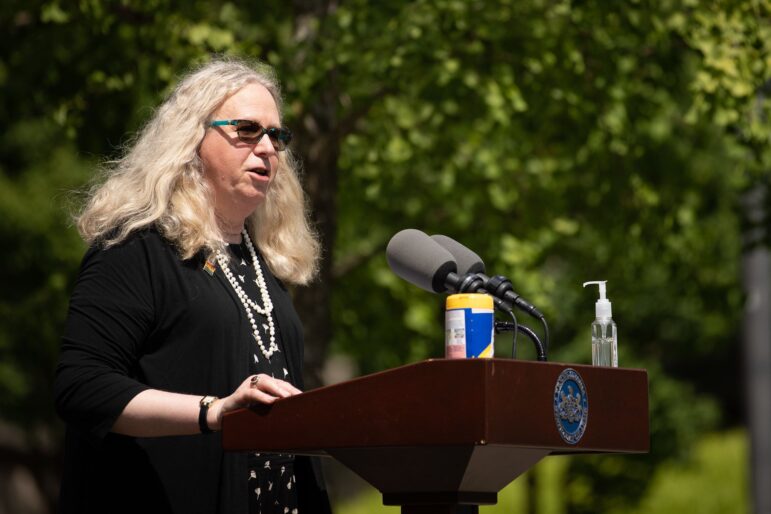 Former Pennsylvania Secretary of Health Dr. Rachel Levine was questioned about topics ranging from gender reassignment surgery to the state’s COVID-19 response during her tenure in a Senate confirmation hearing Thursday. (FILE PHOTO)

Pennsylvania’s former top health official at her Senate confirmation hearing Thursday faced a tirade from a Republican senator about gender-affirmation surgery for minors, as well as criticism about the state’s response to the pandemic.

Dr. Rachel Levine, President Joe Biden’s pick to serve as assistant secretary of Health and Human Services, is a transgender woman who would become the highest-ranking openly transgender official in the federal government if confirmed.

Paul, an ophthalmologist, repeatedly pressed Levine on whether she would support allowing minors to override objections from their parents when it comes to accessing gender-affirmation therapies.

“Transgender medicine is a very complex and nuanced field, with robust research and standards of care that have been developed,” Levine replied. “And if I am fortunate enough to be confirmed as the assistant secretary of health, I look forward to working with you and your office and coming to your office and discussing the particulars of the standards of care for transgender medicine.”

Paul accused her of evading his question, and grew increasingly angry as he pressed Levine to agree that minors should not be allowed to make decisions on hormone therapy or gender-reassignment surgery.

“You give a woman testosterone enough that she grows a beard–you think she’s going to go back (to) looking like a woman when you stop the testosterone?” Paul asked. “You have permanently changed them.”

Paul’s aggressive questioning drew rebukes from LGBTQ advocates and from the chairwoman of the panel, Sen. Patty Murray (D-Wash). Ruben Gonzales, executive director of D.C.-based LGBTQ Victory Institute, blasted Paul in statement, saying he chose “devotion to anti-LGBTQ extremist groups over substance and the health of our nation.”

“Dr. Levine is an extremely qualified nominee whose experience can help America effectively tackle this pandemic, but he took this opportunity to give voice to hate groups instead,” Gonzales said.

Murray urged senators to treat nominees respectfully and to “focus on their qualifications … rather than ideological and harmful misrepresentations like those we’ve heard from Sen. Paul.”

Levine, 63, a pediatrician who most recently served as Pennsylvania’s secretary of health, had faced transphobic attacks in that role, particularly after she became the face of the state’s response to COVID-19.

Levine held daily public briefings during the height of the crisis last year, in which she detailed the latest data on COVID-19 infections and deaths. She also was involved in crafting Democratic Gov. Tom Wolf’s county-by-county system for restricting, and later resuming, business operations and social gatherings.

In introducing Levine at Thursday’s hearing, Sen. Bob Casey (D-Pa.) described her as having a “calm” and “clear, science-based” approach in those coronavirus briefings.

“In this terrible time of crisis for our country, when we have tragically lost over a half-million people to this disease, the need for expert, experienced, and fact-based, as well as compassionate, leadership could not be more critical,” Casey said. “This is the type of leadership that Dr. Levine has demonstrated in Pennsylvania throughout the pandemic.”

Sen. Richard Burr of North Carolina, the ranking Republican on the panel, also criticized Pennsylvania’s vaccine rollout, including mistakes that led to vaccine providers administering first-dose Moderna injections that were supposed to be set aside as second doses, scrambling appointments for tens of thousands of Pennsylvanians.

“At each step–testing, treatment, and now vaccination–your state’s response has fallen short,” Burr said. “As the state’s health secretary, this track record reflects on your ability to meet the challenges that would come across your desk immediately.”

Levine acknowledged that Pennsylvania faced “significant challenges” in the initial response to the pandemic, including problems with testing, contact tracing and a lack of personal protective equipment, “as most other states did.”

“I think that the nation’s response has improved significantly,” Levine said, adding that she would work to improve the collaboration and communication among federal, state and local officials in responding to the virus.

Regarding nursing home deaths, Levine defended the state’s reporting system, saying any discrepancies in the data were a result of a lag time between when a death occurs and when it is recorded in the electronic reporting system.

As part of an effort by Wolf’s administration to combat rising opioid overdoses, Levine signed a standing order that makes the overdose-reversal drug naloxone available at most pharmacies without a prescription.

She graduated from Harvard College and the Tulane University School of Medicine, and she completed her training in pediatrics and adolescent medicine at the Mt. Sinai Medical Center in New York City.

Laura Olson covers the nation’s capital as a senior reporter for States Newsroom, a network of nonprofit outlets that includes Pennsylvania Capital-Star. Her areas of coverage include politics and policy, lobbying, elections and campaign finance.